In the vein of some recent pieces suggesting that we can begin the process of creating pedestrian districts in US cities by starting small, with a block or two, depending on the circumstances:

-- "More about making 17th Street between P and R a pedestrian space on weekends" 2019
-- "Making "Downtown Silver Spring" a true open air shopping district by adding department stores" 2018
-- Items #1 and #2 under Silver Spring, in "Revisiting the Purple Line (series) and a more complete program of complementary improvements to the transit network," 2019
-- "Sadly, DC won't show so well during the Baseball All-Star Game," 2018
-- "Urban design considerations for the area around Washington Nationals Baseball Stadium in advance of the 2018 All-Star Game, 2017 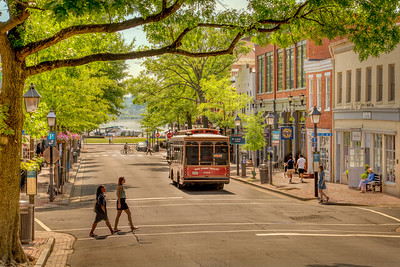 A public open house is scheduled for tomorrow:

As an indication of how long it takes to move innovation forward, this concept was first laid out in 2012, and there were four weekend pilot tests in 2016. 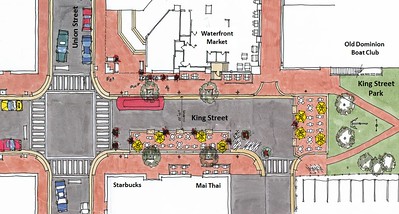 Then again, Alexandria's planning for its waterfront has been controversial and ongoing too.  Related initiatives have been the city's wayfinding program, which is centered on King Street between the waterfront and the King Street Metrorail station, and general improvements along the waterfront.

It's block oriented wayfinding program is the best of any community in the DC area.

It is nice to be able to see water now at the end of King. The interim park space is still a work in progress, but there is activity there.

In the RFP response for Eastern Market's strategic plan I made the point that EM/Capitol Hill needs to be planned for as a destination, and one of the competitive destinations (outside of other places in DC like Navy Yard, The Wharf, H Street, and Union Market) is Alexandria.

So the weekend after the presentation (which we won, I am still surprised, but I gave the presentation of my life, and our problem statement was likely the most focused and detailed) I went to check out a couple competitive destinations including the Alexandria Waterfront.

(We had been there in April.)

There was a craft beer festival, but I missed virtually all of it.

I was still impressed by the various space improvements, playground area and arts installations.

I have checked some of the countries providing one of the Best traveling options where people can see the beautiful locations for traveling and can enjoy the vacation trip in a good way.