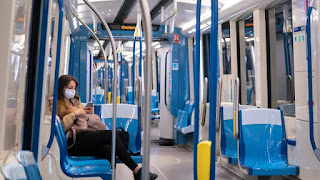 A commuter rides a nearly empty subway train in Montreal on May 25. (Paul Chiasson/The Canadian Press).

The media has been full of stories since the onset of the coronavirus about the impact on transit.  Most systems lost most of their ridership, partly in response to fear of being in close quarters but also because stay at home orders meant that knowledge workers could work at home, avoiding the need to commute--and commuting to work and school provides the bulk of transit ridership.

Surprisingly, transit doesn't seem to be a primary risk factor for getting the coronavirus ("Studies Show Riding Transit During Pandemic Is Pretty Safe," Streetsblog USA).  Even so, people are fearful, and ridership is off anyway and great numbers of people are teleworking.  Systems have also spent more money on cleaning surfaces, although it appears that fomite transmission is not high, and this may be a form of "pandemic theater" aimed at reassuring people.

The second coronavirus stimulus package as passed by the House of Representatives was to provide support to state and local governments, including transit agency, but the Senate under Republican rule never took up the bill.

From the Roll Call article:

Philadelphia, Boston, San Francisco and Chicago are among other systems eyeing cuts, according to Paul M. Skoutelas, president and CEO of the American Public Transportation Association.

His association has estimated that transit agencies will need $32 billion to stay afloat. They received $25 billion in the $2 trillion stimulus bill passed in March, but they quickly exhausted it as the pandemic dragged on.

A second aid bill that passed the House in May included $15.75 billion for transit. That bill went nowhere in the Senate.

The latest proposal, advanced Tuesday by a bipartisan group of senators led by Sen. Joe Manchin III, D-W.Va., would also set aside $4 billion for airports, $1 billion for Amtrak and $8 billion for the motorcoach industry, which has asked for federal help for months, most recently in a plea to congressional leadership sent Monday.

So many agencies are on the ropes, because they've lost 80% or more of their ridership, and the same or a greater percentage of their fare revenue, which is key to annual operating budgets and system finance.

The crisis is particularly pronounced for the large systems, which have lost hundreds of millions of dollars of revenue.  It's less pronounced for smaller transit systems--they've still lost the bulk of the ridership, but their systems tend to be pretty small, mostly bus based, maybe with some light rail, so their financial needs are comparatively smaller.

So transit agencies been cutting service in the current budget year, and service cuts proposed for next year are severe and catastrophic.  And given the similar stresses to local government budgets because of the pandemic, transit agencies can't look to local or state governments to bail them out.

The biggest systems, in NYC, Boston, Philadelphia, and Washington have proposed massive cuts and/or fare increases for the next year.

The renewed effort for a stimulus bill proposes $15 billion set aside for transit, which is less than half of the need.

And this is merely about maintaining transit systems, not about growth and opportunity for economic development as part of a "21st Century Domestic Marshall Plan," as outlined in a recent entry.

It shouldn't be for an inadequate amount, but the full $32 billion need as identified by the American Public Transportation Association.

Of course, this is a problem world-wide ("Transit systems across the globe face a Covid reckoning," Politico), in Canada ("Public transit's rough ride during the pandemic will reshape communities," CBC-TV), the UK ("The bailout of London's transport network shows we are not all in this together," Guardian), France, Japan ("JR East and JR West bracing for massive annual net losses," Japan Times), etc.

In countries run by conservative governments, like the US and UK, governments have been pretty uninterested in helping transit systems, and in the UK, have used the pandemic as a way to further bludgeon local Labour run governments ("Who’s to blame for TfL’s funding crisis? It’s not Sadiq Khan," New Statesman).

The wmata proposal is a joke. 3 or 4 billion dollar budget for almost no transit service? move more out of the capital budget into operating this is ridiculous or put them in bankruptcy and start over!

I understand now how (1) in the 1920s, some cities like Detroit ended up buying suburban streetcar systems to keep the whole system intact. Suburbs didn't have the same motivation.

(2) Similarly I think around then cities and states started "subsidizing" passenger rail by buying equipment for the then private railroads, who said they were losing money on passenger rail.

The biggest problem with WMATA (other than management, financing, etc.) is the Compact, which brings together the city and the suburbs, and the suburbs (excepting Arlington) have different motivations.

The city wants to promote sustainable mobility generally. The suburbs want a way for their residents to get to and from work without clogging up their roads. They only care about commuting trips.

If you had a German style transport association, which also did region wide transportation planning, maybe it could work differently. But they'd have to have the final word. Instead, the way the compact is set up, you have to have all three jurisdictions agree, and as a result, you get lowest common denominator policies.

There just isn't consensus that transit-centricity instead of automobility is the way to go.

In SLC, you definitely see this. There is a transit system, but the region is dominated by the car. So transit can't even really change land use on the margins because it isn't material.

It's like my writings comparing Baltimore and DC. Because transit centricity and proximity isn't valued in Baltimore, you don't have any demand for TOD. Without the value from transit adjacency, you can't get the financial numbers necessary to build bigger, and density is what drives the efficiency and attractiveness of sustainable mobility.

It's a vicious circle.

WRT bankruptcy, it can help change the contracts, but ultimately, as long as the "owners" of the system -- the three jurisdictions -- have contrasting visions you're never going to get congruence.

Because it crosses state lines, it will always have to be joint.

Ideally, DC would buy it out of bankruptcy, but DC has zero vision, and even if it did buy it, it'd screw it up.

idk dude I still ride the system regularly and the frequencies are pretty terrible right now even despite the huge budget! For example the orange line was 19 min headways today! For a 3/4 billion budget. Laughable it is a terrible money pit. Still some unexplained random stops too today. although if they don't do the pointless stops it gets you where you want to be fairly fast

Good point about the pointless stops. Remember when that didn't happen? A long time ago though.

Speaking of still riding, it's not about corona but the flu, but a study found limited contagion from flu or pneumonia via transit use.

yea when i moved to DC in 2006 the system was almost perfect. Great frequencies, cheap, never worried about timing or anything! Ah to go back to those times

And yea i'm not worried about contracting anything on there. Been noticing more riders when i hop on tho, which is good i guess.

It is still very fast when you don't have to wait at the stn and none of those unexplained stops. The 5 sec dwelling at each stop is annoying tho!

the thing that shifted me to biking was the time getting to the station, down to the platform, waiting for the train, then getting out to the street and then to my final destination.

All that dead time I could just be getting to where I wanted to go by bike.

+ I knew that I wasn't dedicated enough to join a gym, and I needed to exercise in a focused way, and biking for transportation was as good a way as any.

At least as long as your trips are under 5 miles or not too hilly that works pretty well.