Master plans frequently don't include privately owned services.  I've written a bunch about how "master plans" should truly be master plans, and cover a community's complete range of assets and programs within functional planning elements such as parks (so include privately run gyms, etc. as well as county, state, federal and other assets), culture (include public and private assets, media and communication, higher education, etc.) and transportation, such as taxis or privately owned parking ("Another example of the need to reconfigure transpo planning and operations at the metropolitan scale: Boston is seizing dockless bike share bikes, which compete with their dock-based system," 2018).

Relevant to this question are private "public places" where the private owners ought to manage their properties as if they were public, and therefore do some public planning and engagement to build consensus on operational decisions.  Mostly they don't do this, or don't do it very well.  A good example is parking planning at Reston Town Center ("Boston Properties backs down in Reston," 2017).

German transport associations as a model for integrated planning and transit services.  WRT transportation I argue that US metropolitan regions should create German style "transport associations" ("The answer is: Create a single multi-state/regional multi-modal transit planning, management, and operations authority association," 2017; "Verkehrsverbund: The evolution and spread of fully integrated regional public transport in Germany, Austria, and Switzerland," International Journal of Sustainable Transportation, 2018) to integrate planning and operations across large areas.

And that as part of this, planning for network breadth, depth and integration should be a separate function from operating and funding the services. 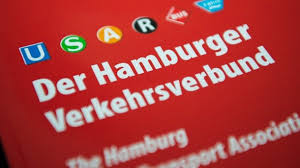 This was pioneered in Hamburg in the early 1960s, when they realized that to maximize ridership it behooved them to make transit fares and service patterns easy to understand.  That it was the job of the planners and operators to make it the service seamless.

While there are a variety of operators, for profit and government, the city-state of Hamburg ends up being a key player in ownership in many of the entities, and the planning function of the transport association extends into neighboring states.

The DC area doesn't have such a system.  Mostly the jurisdictions do planning separately, although by default, the Metrorail system ends up being the primary planner. 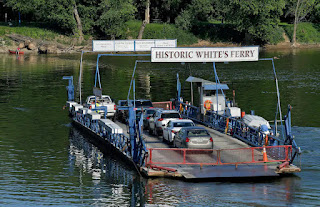 White's Ferry makes its way to the Montgomery County, Md., side of the Potomac River in June. (Michael S. Williamson/The Washington Post).

White's Ferry is a remnant service from the time when most transit services were privately operated.

It's an old fashioned ferry that crosses the Potomac River between Montgomery County Maryland and Loudoun County Virginia.  It's privately owned, and when operating serves more than 600 people per day.

The service ceased operations in December because of a dispute between the owner of the service, based in Maryland, and the owner of property on the Virginia side of the river, where the ferry lands ("After Decade-Long Legal Battle, White’s Ferry Closes," Loudon Now).

I would argue that the transportation agencies in Montgomery and Loudoun Counties should have been more actively engaged in working to maintain the service.

The ferry business was just purchased by a firm with significant financial resources, and presumably the new owners will come to terms with the Virginia landowner and reopen the service ("With new owner, beloved White’s Ferry has a chance of reopening," Washington Post). 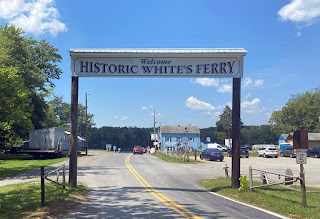 A mobility service relied upon by hundreds of people, and providing unique river-based access between two counties otherwise not very well connected ought to be acknowledged, planned, and if useful, marketed as an element of the transportation system more generally.

But because it's not a publicly owned service it falls through the cracks.

Maybe it's a bit better in London, Montreal, and San Francisco, where the local transportation authority has planning responsibilities for taxis, sometimes roads, and other services, not just transit.

But were a transport association structure in place, for profit mobility services like car share, ferry services, and toll roads and bridges should be at the table.

Although, like with the privately owned Ambassador Bridge connecting Detroit and Windsor a difficult owner can lead the government sector to create their own separate services ("Manuel ‘Matty’ Moroun, Owner of Ambassador Bridge, Dies at 93," Detroit News).

Genuinely curious what about area transit planning/management would lead you to think they overseeing this would not be a total disaster?

Not operating and funding it. More directly acknowledging it as an element of the mobility system, and providing "suasion" as necessary to keep both parties (the ferry operating and the landing owner) in synch.

But like private properties owned by recalcitrants, who let them languish, there's no guarantee.

Not unlike Uber being against regulation, the chaos of dockless bike share and scooters, the death of Car2Go...

Wrt WMATA it was weird. First I saw an article about a small increase in service, including 10 trains/hour on the red line. Then the service cuts.

I understand the exigency, but it's just another example of the need for the German style transport association model. WMATA would shift to an operator, not the overarching role they have now.

Eg in London, Keolis runs the Overground trains but under management and planning of Transport for London (and signals/scheduling management coordinated with Network Rail).
In most of the German systems, many of the bus services are contracted out. (Not unlike many places here.) Planning and funding and budgeting are separate from operations.

Just read a book not quite 10 years old, Driving Excellence, about the revival of the transit system in Greater Rochester New York. Except that it is so much smaller, I kept thinking of WMATA and how they could use that kind of leadership. The group had bad problems with some of the unions too.

I write about making hard choices. They did. But creatively. And this enabled them to improve service, frequency and significantly lower the fare by eliminating zones and transfers.

But one example of hard choice. They created a "quiet room" where drivers could sleep etc. if they worked split shifts.

But before it opened, someone likely part of the union, went in and pissed on all the furniture, did other damage, etc.

The CEO said, until we find out who did this, we're not opening it up. And they didn't. They kept getting plaintive queries, "c'mon just open it." But the CEO refused to give in. That's a tough decision, but the right one.

Interesting! No one in WMATA (nor local politicians) have a spine for such a thing, but that is exactly what is needed

But yes rush hour 12 min frequencies on all lines except the red - despite massive and never been higher funding - is atrocious.