There is a spirited discussion about Community Benefits Agreements on the pro-urb listserv. Usually the legal trigger for CBAs is a granting of zoning relief, density bonuses, or the provision of some sort of government resource (land, infrastructure investment, etc.), which creates, possibly, an extranormal economic return, thereby justifying some percentage capture of this to go back to the community in terms of some sort of improvement.

Basically my points are that you need robust plans and processes in advance of the opportunity for a CBA, that having consensus priorities for a neighborhood set allows you to direct proffers to evident needs and preferences as opposed to an idiosyncratic list, that going through the Councilmember's office to do this is usually a process designed to favor the developer, etc.

And that there should be a unified process for negotiation--there are separate processes for tax abatements and zoning-related professors, for presenting those agreements in a publicly accessible database, and a process for ensuring the agreements are met.  In DC, none of those conditions are present  ("Major Adams Morgan Hotel Project Resurrects Concerns About Developer Tax Incentives," Washington City Paper).

In past blog entries, I've argued that the process of negotiating community benefits needs to be tightened up.

2. Create a public and transparent process for tax abatement and eminent domain requests (see "Make eminent domain fair for all" from the Boston Globe; the recommendations pertain to both issues); 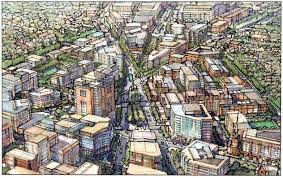 Image from the Clarendon Sector Plan (2006).

One of the best systems I know is Arlington County, Virginia. They aren't CBAs but required proffers. In the late 1960s, as an inner ring suburb, the county was declining in the face of development further out in the suburbs.

That's why they seized on the opportunity of the Metrorail system, and convinced the planners to shift the routing from the middle of I-66 to the Rosslyn-Wilson Boulevard corridor, bringing 5 stations to the northern core of the county.

Along the corridor, they didn't change the zoning per se, which was mostly low density commercial and residential.

They created a Planned Unit Development process, allowing for much more intense density, just for a couple blocks on either side of the corridor, but to get the density, you had to go through an intense review and approval process, triggering proffer requirements. Compared to other jurisdictions in the DC area, they get a lot more "community improvements and public goods" in return.

OTOH, I argue that every so often Arlington should study the process and the projects and determine structural improvements, getting more in return, etc. They say that if they did this, it would reduce the "predictability" that developers want. And, given the extension of Metrorail to Fairfax and now Loudoun Counties, their commercial real estate market has been devastated by the creation of cheaper real estate further out, but still with Metrorail access, so they are loath to change their system very much.

CBAs as an element of community kinship systems.  The thing is, and I never really took anthropology in college, that the demand for CBA or "good neighbor" agreements is a kind of element of what we might think of as a sense of "community kinship systems" and CBAs are the cost for outsiders of buying in to become a bona fide member of the community.

I wrote a piece about this in 2012. At the time I thought it was great. Now I'd say it needs an update and should be split into two different pieces. One on kinship, one on retail in low income places.

-- "In lower income neighborhoods, are businesses supposed to be "community organizations" first?"

This piece, published the year before, makes some similar points.