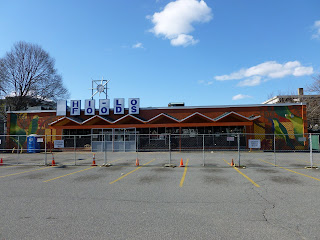 Image: Closed Hi-Lo Foods Supermarket, Jamaica Plain neighborhood, Boston. Wikimedia photo.
I've written about the issue in the Route 1 corridor in Riverdale Park, Prince George's County, where a proposal to create a mixed use development that would include a Whole Foods Supermarket is looked askance in some quarters because of the impact on traffic on the relatively constrained Route 1, and because the development would be in an area where there is absolutely no retail--it's mostly residential with some large commercial office sites. The Post has a piece about it today, "A Whole Foods in Prince George's?," and has editorialized against "nimbyism" over the plans for the site. See the blog entry, ""Nimbyism" on commercial corridors in DC and Prince George's County (+ Fort Meade)."

Retail sprawl
I do agree with concerns that what we might call retail sprawl, of adding more greenfield retail development, when there are plenty of other existing retail sites not doing so well, is a bad thing. Somehow we need to get retailers to be willing to locate in existing centers so they can be improved, rather than create more new centers at the expense of the quality and viability of existing shopping districts.

But there is no question that in Prince George's County there isn't opposition to Whole Foods per se. Whether or not people are happy about the proposed site, they want the company to locate in their county as an indicator that it is affluent and "deserving" of upscale retail.
Upscale chains, retail turnover, and gentrification-displacement

In the Jamaica Plain section of Boston, plans to bring a Whole Foods Supermarket to a site, replacing a relatively low brow Hi-Lo Supermarket (which closed independently of decision making or actions on the part of Whole Foods) have been opposed in some quarters because they see the replacement of a relatively low cost supermarket provider with a high cost supermarket as an indicator of gentrification and neighborhood change and deleterious to lower income residents and small and local businesses, especially Hispanic food retailers. See "JP group drafting deal to negotiate with Whole Foods" from the Boston Globe Your Town blog.
This is exactly opposite of the sentiment in Prince George's County.
Community benefits agreement initiatives
Interestingly, not unlike what has happened in DC over Walmart, there is an initiative to try to create a "community benefits" agreement with Whole Foods, although it is contentious, as WF has vociferous supporters and opponents ("Police arrest 3, abruptly end Whole Foods first meeting with Jamaica Plain residents" from the Boston Globe), and the neighborhood association board voted 8-7 to oppose the store.

But for the most part Whole Foods as a use is "matter of right" (replacement of a grocery store by another grocery store), providing little leverage to the community for bringing Whole Foods to the table to make a deal, because nothing prevents WF from opening a store.

Like the proposed community benefits agreement for Walmart in DC put to Walmart in DC by the RespectDC Coalition, one could argue that there is a lot in the proposed benefits document that isn't relevant to the mission of Whole Foods (e.g., providing funds for low income residents to buy food at farmers markets), but the document produced, Ad-hoc Whole Foods Committee Report to full JPNC, June 28, 2011, by the Jamaica Plain Neighborhood Council on the issue is impressive--with more footnotes than the document I helped produced on the Walmart issue for ANC4B (the 4B document didn't discuss community benefits agreements but did discuss negative economic impacts and how to mitigate them).

Part of the reason that sectors of the Jamaica Plain community believe they should be able to get community benefits is because in a different situation in the early 1990s, the redevelopment of a neighborhood brownfield site including a Stop & Shop Supermarket, did include a $500,000 "trust" fund to support community activities, including mitigation of negative impacts on small businesses (although no money ended up being paid out for that purpose). See "JP’s last supermarket war" from the Jamaica Plain Gazette, which discusses the previous project, how the developer brought in as partners two local nonprofits and provided the trust fund.
(The article from the JP Gazette is a good explanation of how inner city redevelopment projects tend to come together, especially in weak real estate markets.)

But the situations are different (cf. the blog entry, "Not understanding what triggers a community benefits process").
While I am a strong supporter of community benefits agreements in situations where the developer/tenant seeks "relief" (zoning changes such as exceptions, variances, upzonings, including PUDs, and even for plans that differ significantly from what is recommended in community and comprehensive land use plans), I am torn about imposing community benefits plans on businesses generally. After all, they are businesses, and their purpose isn't one of social welfare.
In any case, if a community has a special zoning review process for "big box retail," regardless of whether or not the project is matter of right, then a community can have more input into projects along "community benefits" lines.
Without such provisions, communities have little leverage.
The need for Big Box Retail Review ordinances
This was definitely the case in DC, where not only do we not have a big box retail review ordinance, because elected officials jumped on the Walmart bandwagon fast and furious (see "The Selling of Walmart: How the world's biggest retailer won over D.C. without a fight" from the Washington City Paper) it became almost impossible to develop any forward momentum to deal with Walmart from a position of oppositional strength, in the situations where the developers needed that kind of push in order to do better projects.
No ability to push means the projects for the most part won't improve (a/k/a "suck").
And I would argue it's a dereliction of the responsibilities of elected officials to act solely as cheerleaders and not as "organizers" focused on achieving the best possible outcome to the city and its constituent neighborhoods.
San Diego passed a very strong big box review ordinance. But massive organized opposition by Walmart led to the City Council caving, and repealing the ordinance. See "City Council Votes To Repeal Big-Box Ordinance" from San Diego Channel 10 News.
I haven't been able to find the exact legislation ("Ordinance to Protect Small and Neighborhood Businesses"), but this report on the bill by the San Diego Office of Planning has a good overview of the provisions.
Plus a State Senator, Juan Vargas (D-40), introduced a similar bill at the state level, and the text of that bill (SB 469, "Small and Neighborhood Business Protection Act") can be reviewed here.
That's the kind of retail review ordinance that cities like DC or Boston need to have in place in order to deal with these kinds of projects, if you want to be able to have leverage for negotiation.
Better definitions for what community benefits agreements cover and what counts
Still, it is important that the parameters of what Community Benefits Agreements can do be well-defined.
From the standpoint of development projects I have been involved with in DC, I have written a number of blog entries over the years, including "Community benefits agreements (revised)" and "Community benefits agreements revised (again)" providing suggested direction and a typology that outlines definitions of the types of benefits that projects can provide:

1. National benefits;
2. City-wide benefits;
3. Building-specific design improvements;
4. Neighborhood benefits within a geographically defined area such as an ANC; and
5. Micro-benefits within a couple block radius of the project

and a method for monetizing the "relief" granted to the property owner.
Note that this entry, "Community Benefits Agreements and Energy Consideration" discusses why, because for the most part "green improvements" to a building project are fully monetized in increased rental income and reduced operating costs, "green/sustainable" characteristics of building projects shouldn't be considered "community benefits" as part of negotiated packages.
Green benefits in the context of development projects are often a form of "greenwashing," a form of deceptive marketing-promotion, because the additional costs come back in additional revenues. Also see "Property Funds See the Value in Being Green from the New York Times. From the article:

Constructing or renovating a building to make it environmentally sustainable can be a daunting task for any owner, but Jamestown Properties, a German commercial real estate investment company, has decided it will go “green” in nearly its entire $4 billion portfolio of buildings, all located in the United States.

The overhaul involves fixes as simple as installing low-flow water fixtures and as complex as revamping heating, ventilation and air-conditioning systems. Jamestown expects to recoup costs through energy savings, the ability to charge higher rents and higher resale values.