Building from my writings on railroad transportation primarily in the DC area, including the DC State Rail Planning process in 2015 and both built on and led to other pieces arguing for transformation:

-- "A regional railroad passenger transportation vision for DC, MD, VA, WV and parts of PA," 2006
-- "Regional transportation planning and fixed rail service," 2009
-- "Why don't Maryland and West Virginia think about expanding MARC into a true regional system?
-- "One big idea: Getting MARC and Metrorail to integrate fares, stations, and marketing systems, using London Overground as an example," 2015
--  "A new backbone for the regional transit system: merging the MARC Penn and VRE Fredericksburg Lines," 2017
-- "A brief comment on ground transportation at National Airport vis a vis VRE rail service," 2016
-- "A "Transformational Projects Action Plan" for a statewide passenger railroad program in Maryland," 2019
-- "The ability to develop around transit stations is conditional on land use and mobility context," 2012

along with learning about the privatization and organizational of railroad passenger services in Japan, I have a partially written series about re-articulating train service planning and operations at the national and multi-state scale. 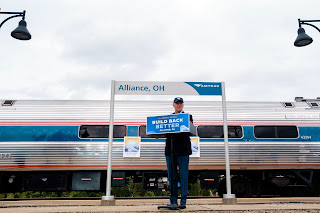 Joe Biden, then-presidential nominee, campaigns at the Amtrak station in Alliance, Ohio, on Sept. 30. Biden — our most famous Amtrak rider — is proposing an $80 billion infusion in railroads.
(Gabriela Bhaskar / The New York Times,

From the Boston.com article "Here’s what Amtrak’s vision for 2035 looks like for New England":

With that funding, Amtrak — which is publicly funded and privately operated — said Wednesday that it would be able to execute on many of those goals, including improving Northeast Corridor trip times and expanding service to underserved communities across the nation.

The proposal would be the first major expansion in the 50-year history of the agency, which was approaching profitability prior to the COVID-19 pandemic. Since its creation in 1971, Amtrak has barely seen any changes to its route map and has faced local opposition to expansion in some parts of the country, as The New York Times recently reported. However, Amtrak CEO Bill Flynn said Wednesday that Biden’s plan could finally set those plans in motion.

“Amtrak has a bold vision to bring energy-efficient, world-class intercity rail service to up to 160 new communities across the nation, as we also invest in our fleet and stations across the U.S.,” Flynn said. “With this federal investment, Amtrak will create jobs and improve equity across cities, regions, and the entire country – and we are ready to deliver.”

JR/Japan Railway as a model

As a government corporation, Japan National Railways was ponderous and losing money and the government didn't want to continue to fund massive debts.  Not all of the companies are privatized, because some aren't profitable.  Besides a much greater focus on the customer and marketing, a major change with privatization was allowing the companies to be active property developers and operators of related businesses, which provides as much as 33% to 60% of total revenues of firms like JR East and JR Kyushu.  City-centered railway companies are better positioned to take advantage of such opportunities, while more rural-oriented companies suffer from declining population, competition with the automobile, etc., and require ongoing subsidy.

The JR services are "trunk line," foundational services, and are complemented by a large number of what they call "third sector" rail passenger services, which are a mix of privately owned and operated and publicly-supported rail lines. (There is also inter city bus service, not affiliated with JR.)  The Shinkansen train services, the first high speed rail services in the world, compete with airlines and provide premium service.

While some of the non JR services are fairly large companies, most are quite small and very localized.

All of the rail companies, JR and third sector, work heavily to market their services, create special tourist trains, and work with local communities on economic development and tourism promotion ventures.

In fact, such promotion used to be quite common with US railroad companies in the 20th century, promoting tourism, business development, residential recruitment, etc. 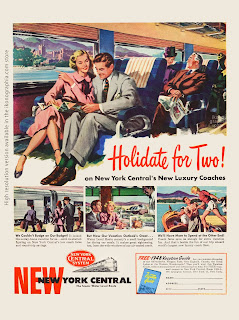 Most US railway companies (and major gas station companies) had tourism departments. 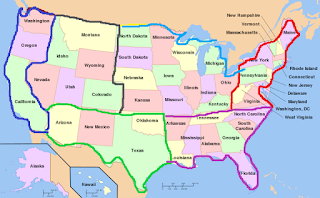 My six regions for a national and regional railroad transportation plan*

This organization of the regional districts isn't "final."  A study of mobility flows between states should determine the distribution of states across the mobility districts.  For example, maybe Arizona and Nevada should be with the Coastal region, or Arizona and New Mexico with the Intermountain region, etc.  Or perhaps some states should participate in two regions, depending on the nature of their mobility flow.

Many of the ideas promoted by Amtrak as part of their 2035 initiative work well within that framework, which still extends beyond what Amtrak is approaching ("Amtrak unveils ‘Connects US’ map that suggests new corridors," Trains Magazine). 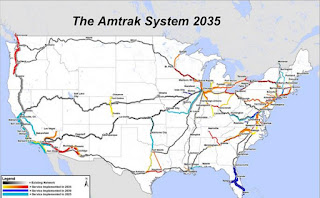 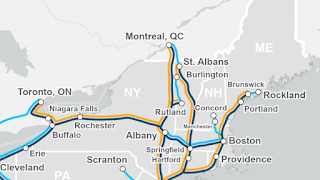 Map of what Amtrak expansion would look like in New England 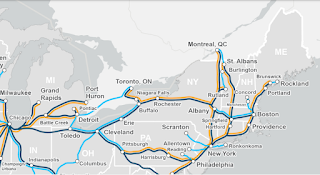 Intra-state and multi-state railroad expansion initiatives should be integrated into this program, comparable to how Japan's "third sector" railroads either complement JR services or in some cases compete with them (e.g., Keikyū  has five lines totaling 87km, 73 stations, and over 1 million daily riders pre-pandemic). 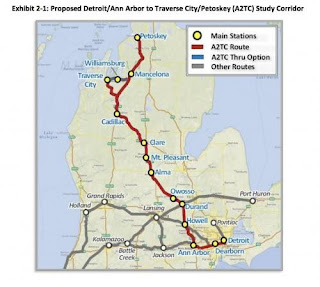 Proposals for passenger rail expansion in Michigan not involving Amtrak. 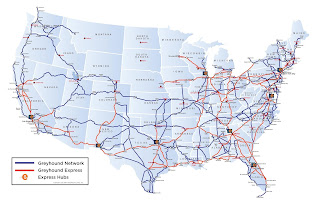 Greyhound national bus route map
While the forthcoming series on the rearticulation of rail transport focuses on the train, the reality is that it is about transit planning and operation at a large multi-state and national scale.

To work, it places rail at the foundation, complemented by inter-city bus and ferries, as appropriate, to create a wide and deep mobility network that is not car dependent.

(Although a big focus within building the viability for rail is to replace short distance airplane travel with train trips, and to electrify to the extent possible the rail network, on climate change grounds.  Coastal states like Massachusetts, Connecticut, Maryland, etc., have a great opportunity to reduce greenhouse gas emissions through shifting to train passenger use and electrification.) 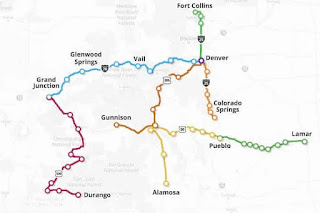 Colorado's "Bustang" program is probably the best if not only example of planning and delivering inter city bus service at the state scale, with a focus of linking rural areas to major cities ("CDOT happy with Bustang ridership during COVID," Daily Sentinel).

Greyhound's owner would like to sell.  The media reports that First Group, the UK transit operator that tried to make a go of it in the US through three divisions: school transportation; transit agency service operation; and Greyhound; has sold its bus and transit division and wants to sell Greyhound, but has no takers ("FirstGroup sells bulk of US transport business in $4bn deal," Guardian). 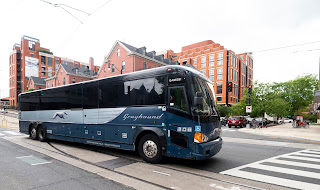 Greyhound's acquisition would be a great opportunity to integrate the inter-city transit network into a more seamless system. If Amtrak were truly visionary and about regional and national transit, not just railroad passenger service, it would make sense to merge the companies, with the aim of creating the kind of national transit system I envision (which used to exist anyway, through the combination of the various railroad passenger services and their interconnections, complemented by bus services from Greyhound and Trailways--national providers, and local and regional providers).

But unfortunately it's a stretch.  Note that this is a "Transformational Projects Action Plan" concept at a massive scale.  Sadly, I don't think either the federal government generally or Amtrak specifically have within them the ability to seize such an opportunity.  The federal government is not known for its innovativeness and entrepreneurship although there are plenty of examples when it has done just that.

Amtrak was set up to be a "maintainer" of rail service, basically as a way to offload the expense of passenger service from freight-focused railroads increasingly in financial trouble, with a mandate for managed decline, complicated by difficult budget issues and political maneuvering within Congress, not to mention lobbying by private transportation organizations, especially airlines, to keep it uncompetitive ("Amtrak 2035 Map: Hopes and Challenges," Railway Age). 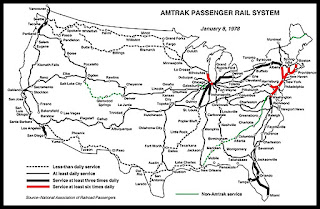 Amtrak is already a nonprofit corporation, so its corporate form isn't the issue, as much as its crippled mandate, funding, and political and other forms of competition.

There is a thread about your idea, on a message board that has a number of railroad insiders commenting on it.

The post was already too long, because it had the long opening about JR, but I should have discussed that Amtrak, probably with third parties, does have some complementary bus services in association with their trains.

Years ago, there was a shuttle between Toledo and Ann Arbor, for the train that went from Chicago to NYC.

In Maryland, the Bayrunner Shuttle at least used to be marketed in association with Amtrak, providing service from BWI Airport to Salisbury, where the company is based.

I'm sure there are plenty of other examples.

2. The person whose comment suggested "AmBus," I liked that, although I'd co-brand Greyhound/AmBus and even more AmericaBus, because of the brand equity in the Greyhound name.

3. And yes, the point is to provide an integrated regional inter city transit system.

I've written in the past how because these services are mostly private they aren't planned very well nor regulated very well in terms of service quality.

AND, to my shame, when I wrote my first post on creating a framework for transit planning at the national/districts/multi-state/regional/metropolitan scale, I didn't include inter city bus, which a commenter pointed out.

(The actual comment was in a previous application, so it's lost to the ether.)