May 1st was the 50th anniversary of the first operating day for Amtrak, the National Rail Passenger Corporation. 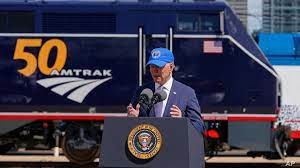 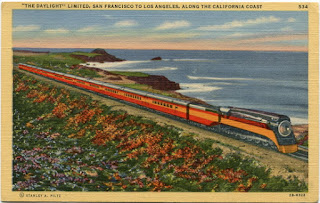 The reality was that the long distance passenger services that the railroad companies pioneered became much less viable in the face of air travel and the automobile.
Amtrak was provided with privileged access to freight rail trackage and lower rates (neither was extended to commuter rail services independent of Amtrak), although freight rail service continued to be prioritized in a way that makes Amtrak service unreliable.
Joe Biden: a president who is pro rail.  With rail proponent and now President Joe Biden in office, Amtrak's prospects look a lot better after decades of being batted around by a Congress dominated by fossil fuel and automobile  interests, a overarching belief in the market over government action and little faith in the idea of public transit ("America's Amtrak moment could finally be here," CNN, "U.S. passenger railroad Amtrak asks Congress for $5.4 billion," Reuters). 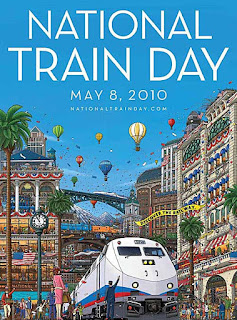 Originally, I didn't realize the significance of when it was celebrated, why they selected around May 10th, but it's because that is the anniversary day of the hammering of the Golden Spike in Promontory Summit, Utah, which marks the creation of a transcontinental railroad in the US, by creating a railroad line in the west, from Omaha and ending in Sacramento, which in turn connected to rail lines emanating from the Eastern US to Omaha.

There is the Golden Spike National Historical Park in Promontory Summit, and the Utah State Railroad Museum at Union Station in Ogden.  There were big anniversary events in 1969, the 100th anniversary, and 2019, the 150th anniversary.

In my in process set of articles on rearticulating passenger rail service in the United States, the third piece is about National Train Day as an element of marketing.  There are two main points.

1.  "Train Day" should be brought back, but as "Train Month" because one weekend is too difficult and too compressed to be able to promote passenger rail all across the US. 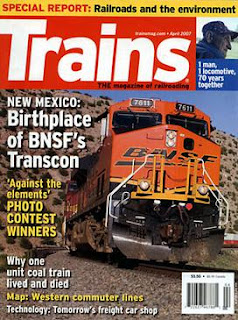 2.  Train Month should involve all sectors of the train industry, focused on passenger rail service but not exclusively.  But it should be much more expansive.  Not just national rail services by Amtrak, but regional commuter rail services, tourist railroads, train stations, railroad and transit museums, and related organizations and transit and trade media.  And freight railroads too.

This would provide lots of opportunities for events, and a lot of promotion.  It'd be a great time for advocacy groups to draw attention to their initiatives, etc.

And by involving multiple organizations, including the for profit freight rail industry -- which could use the opportunity to promote the energy savings value of freight railroad transportation as opposed to truck-based freight -- would ease the financial and organizational burden on Amtrak.

Many organizations are already doing events: leverage existing initiatives and add to them with a national calendar.  The recent post on tourist trains as an element of railroad transportation planning mentioned the B&O Railroad Museum, the Virginia Transportation Museum, Railway Heritage Days in Manassas, Virginia, and Clifton (Virginia) Day and various railroad transportation events.

There are plenty of similar activities across the country, such as Railroad Days at the Fullerton Train Museum in California, various events throughout the summer at the Illinois Railway Museum, tourism excursion trains, etc.

It may be like herding cats to get them to coordinate, but the wide array of organizations and assets makes a Train Month possible, and expands it far beyond Amtrak.

Coming across that document definitely influenced my thinking about how the DC's State Rail should include a similar element (which didn't happen), focused on the place of Union Station and its potential as a real-life museum for the interpretation of DC, regional, and national transportation history.

And Ride Philadelphia, the transportation history display program in Center City Philadelphia, along with other displays I've seen in Walla Walla, Washington, Portland, San Francisco on their heritage streetcar line, and the display outside Queen Street Station in Lancaster, Pennsylvania.

I've also argued that transit stations and shelters should be used as touchpoints for delivering cultural history interpretation on local transportation history.

In DC, it's been an issue about the preservation of an old trolley bridge in Northwest DC that was for the old 20 Streetcar line to Glen Echo Park ("Major setback in effort to save historic DC trolley bridge," WTOP). 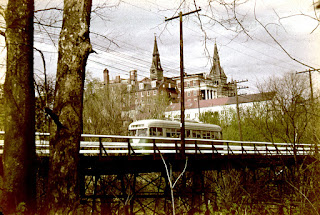 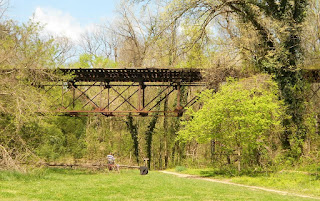 I argue that the bridge should be preserved, but it shouldn't be the responsibility of WMATA, since it isn't part of their active infrastructure portfolio.  Instead, the city should take it on.  But unlike Passaic County, DC's Department of Transportation doesn't think it's important.

TIME: Amtrak's Boss Has a Plan to Make You Love Trains Again. Will it Work?.
https://time.com/6026599/amtrak-interview/