Newspapers as public media: WBEZ, radio, an NPR affiliate, to merge with the Chicago Sun-Times

The decline in newspaper readership has had a significant negative impact on civic life.

-- "Newspapers, community media, and knowledge about and engagement in civic affairs," 2020

In response, private equity has bought many newspapers, split off assets from newspapers like buildings and other property, television stations, etc., that once had helped support newspapers financially.

Over the past 20 years, many newspapers, especially community newspapers, have shuttered or severely reduced their staffs and the number of articles they run, especially when it comes to local coverage.

The decline of newspaper media groups even hurt the ability of the Newseum news museum in DC to build its endowment, leading to (hopefully a somewhat temporary) demise ("What the Fall of the Newseum Says About News, and Museums," Bloomberg).

A number of metropolitan newspapers have reduced their publishing schedule to less than seven days.  A number of Advance Newspapers only publish three days/week.  In Salt Lake, the Deseret News and Tribune each moved to a weekend only edition, although the Tribune recently added a Wednesday edition, complemented by daily digital newspaper publication and expanded digital operations.  In New Orleans, such a reduction led to the eventual demise of the Times-Picayune in favor of a 7 day/week New Orleans edition of the Baton Rouge Advocate.

A number of digital only news reporting entities have been created in response to this decline.  Some are for profit, some are nonprofit.

1.  For decades, the Tampa Bay Times (previously the St. Petersburg Times) has been owned by a nonprofit institute.

2.  A few years ago, the Philadelphia Inquirer was acquired by a local group and then donated to the Lenfest Institute for Journalism.

3.  Recently, the Salt Lake Tribune converted from a for profit to a nonprofit.

4.  A group of NPR stations acquired online for profit digital operations, such as DCist in DC, acquired by WAMU-FM, and Gothamist in NYC by WNYC-FM, adding them to their radio newsrooms. 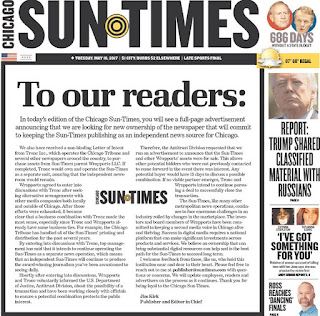 5.  And now WBEZ-FM in Chicago is merging with the tabloid newspaper, the Chicago Sun-Times ("In Chicago, a public radio station comes to the rescue of the Sun-Times newspaper," Washington Post).

Many public television and public radio groups have redefined as "public media" or "community media" organizations, and in many communities like Boston or Salt Lake, the main public radio and PBS stations are often merged into one unified group.

Adding newspapers and digital newsrooms to the mix might be the next step, although running a newspaper especially one that publishes every day is a lot more expensive and potentially less profitable, especially with massive declines in circulation.

The Sun-Times has struggled over the past decades and went through some hedge fund ownership debacles.  One thing that kept it going was the development of a suburban network of weekly and six daily newspapers, like the Southtown Economist.  But they were sold off to the Chicago Tribune a few years ago, making the enterprise financially weaker ("Sun-Times’ parent company sells suburban newspapers to Tribune," Sun-Times).

The Washington Post: If local journalism manages to survive, give Evan Smith some credit for it.
https://www.washingtonpost.com/media/2022/01/23/media-sullivan-evan-smith-texas-tribune/