Newspapers, community media, and knowledge about and engagement in civic affairs

Newspaper image ad about the value of newspapers, Montana Standard, 7/22/1969.

A friend's mother died, and she spent a couple weeks cleaning out her house.  Among her finds were some newspaper sections and clippings relating to Apollo 11's landing on the moon, on July 20th, 1969--tomorrow will be the 51st anniversary.

When I look at old newspapers, usually I am equally interested in the ads as much, if not more than the articles.  Because back then, ads were often local (stores, opening of new real estate developments, etc.) and the ads provide a different way of accessing history.

(Although you can always usually find at least one particularly interesting article in any newspaper.)

The above ad was what was called an "image ad," in this case about the value of newspapers and a free press.  (Back in the day of mass media magazines like Time, Life, and the Saturday Evening Post, companies and trade associations frequently ran such ads.) 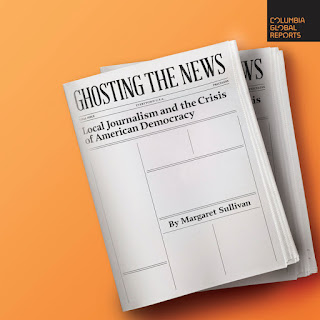 I thought it was particularly poignant given all the press coverage about Ghosting the News: Local Journalism and the Crisis of American Democracy, the new book by Margaret Sullivan, the media columnist for the Washington Post.

Most of her career was spent at the Buffalo News, a once large metropolitan newspaper that boasted a circulation of over 300,000.  She was the editor in chief of the paper for almost two decades.

I have a bunch of entries about the value of media and civic engagement and knowledge about civic affairs.

-- "One more blow against community media: Washington Post drops Thursday "county" news special sections," 2017
-- "The ongoing tragedy of dying print media, the latest being community newspapers in Montgomery and Prince George's Counties, Maryland," 2015
-- "Voting vs. civic participation | elections vs. governance," 2016
-- "Revisiting community radio," 2020
-- "End of the year articles: decline of local newspapers," 2019
-- "A brief comment on the connection between newspapers and civic affairs with the offer by a vulture hedge fund to purchase Gannett Newspapers," 2017
-- "Grassroots communications capability in the city," 2005
-- "Protest as Civic Engagement and the role of the media," 2007
-- "DC's community newspaper weekly, the Northwest Current, goes out of business," 2019

Within media, there is a big difference between television news, which is how a majority of people now get "their local news", and news from a newspaper -- although either is more likely to be via computer or phone.

Most communities used to have metropolitan newspapers serving the entire area, newspapers like the Chicago Tribune or Detroit Free Press, but they were complemented by smaller daily newspapers in outer areas of the region, like the Oakland Press and Royal Oak Tribune in Oakland County, Michigan and the Macomb Daily in Macomb County.

The rise of two car households--before people took transit to and from work and often read the "evening newspaper" on the commute trip home, and television evening news broadcasts killed the afternoon newspaper.

In turn even smaller community newspapers, published once or twice each week, such as the Troy Eccentric serving Troy, Michigan or the Redford Record, serving Redford Township and the nearby neighborhoods in Detroit, in Wayne County, served even smaller slices of a metropolitan area.

Community newspapers have even more problems than the big newspapers.  In many areas the big paper acquired these networks, although many remained independent.  But they are rapidly going out of business too.

Local television doesn't focus on the day-in, day-out coverage of local and state government actions, as much as it does on murders, gruesome car accidents, fires, and the weather.  It is said that one page of a newspaper provides more news than a 30 minute local tv broadcast.

One exception that I wrote about is WCPO-TV in Cincinnati, which has a digital news site that is superb.  But the company had its roots in newspapers, which influenced the development of this operation, which is more of a one-off flagship effort, rather than being ported to other television stations in the Scripps group.

Note that some PBS stations in a couple big markets like Chicago and New York City do daily newscasts that are locally focused, and many PBS stations have weekly programs on area civic affairs as well as other area-focused informational programming (Outdoor Maryland, Direct Connection, This is Utah, etc.).

Public radio too is an increasing source of local news, complementing national radio programs like "Morning Edition."  And both PBS and NPR stations often have more extensive online news websites.

But especially in the last 10 years, but steadily since the invention of the web browser and as importantly, the development of digital advertising networks, first Craigslist, which decimated classified advertising revenues, and then the capture of the equivalent of display advertising by Google and Facebook, newspapers have crashed economically.  Advertising provided most of the revenue, and it has dried up.

There are other reasons for this too, in particular the chaining up of consumer facing businesses--not just retailers, but also banks, etc.--and the consolidation of these businesses within sectors.  For example, Macy's is the primary and only department store in many areas today, whereas before places had multiple firms all advertising in the local paper.  Most places don't have local banks, and they sure aren't giving away toasters to get your account, necessitating a newspaper ad.  Etc.

Newspapers haven't quite gone out of business, but they have significantly shed staff, become much smaller, and cover a lot less news, and in many smaller regions, the main newspaper no longer publishes a print edition every day, going down to maybe 3 days/week.  Many papers no longer have bureaus across a region or state, an office covering the state government, located in the state capital, etc.  (And many have shed foreign bureaus and Washington bureaus.)

Not only has the movement to the Internet changed media economics, at the same time, the explosion of online content, especially more entertainment-related, has led to a bifurcated environment, where many people no longer consume much in the way of local news, or because the Internet allows for easy consumption of media content from all over--the Guardian or Financial Times from the UK or the Toronto Globe and Mail from Canada, and the New York Times, Washington Post, and the Wall Street Journal in the US--"local" newspapers are losing out to national or international newspapers, for national and international news, and people just aren't consuming local news at all.

Besides the national- and international-ization of news sources, there is also the rise of digital native media, many of the nationally-oriented sources with a decidedly left or right bent, and many of these "sources" have limited fealty to facts, instead leading with ideology.

There has been an explosion of local news websites too, like Public Source in Greater Pittsburgh or DC Line in the DC area, often with philanthropic support.   Others that are supported by local advertising.  But it's hard to scale as well.

Oh, alternative weeklies have been crushed as well--a big source of revenue had been personal ads, which shifted to the web as well.  And many have gone out of business.

One of the pieces about Sullivan's book made a fascinating point as an example about the decline of local newspapers--in circulation and reach, relevance, and coverage--using the story of Representative Chris Collins, a Republican Congressman from the Buffalo area.  He was the first elected official in Congress to endorse Trump.

Later he was indicted for insider trading, and at first was going to resign, but then he decided to still run for reelection.  (He won, but after he was found guilty, he resigned.)  It turns out that most of the people in the congressional district didn't even know that Collins was indicted, and because of the lack of reach by local media, especially newspapers, Collins was successful in labeling it as "fake news."

While there an explosion in how much there is to know and what you can know, there is a simultaneous inward explosion in the reduction of people who care to know.

It's amazing that an elected official could get reelected because people don't even know he is indicted.