Riots lead to gentrification, according to the New York Times

===========
Updated: On the pro-urb list, a commenter shares with us a Harvard study from 2014 ("A new view of gentrification," "Divergent Pathways of Gentrification: Racial Inequality and the Social Order of Renewal in Chicago Neighborhoods," American Sociological Review, 79:4) which makes the point that gentrification is more dependent on prime location, and in the case of Chicago, percentage of population that is African-American, not whether or not an area is riot-scarred. 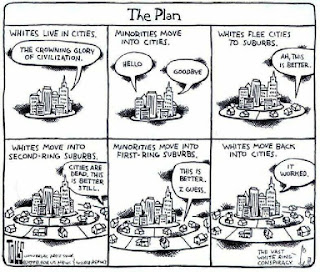 In "Riots long ago, luxury living today," the point is made that districts rended and wrecked by riots in the 1960s are now being gentrified.

While that's a significant overstatement as many such areas in districts like Watts, or Detroit or Baltimore haven't experienced that kind of change in the way that neighborhoods in Washington, DC have, I think it's a facile argument.

(1) Starting after WWII, cities were abandoned by outmigration to the suburbs, wrecking urban residential real estate markets.  Outmigration was fueled by a sense of relief and new hope, spurred in part by the fact that cities had experienced 15 years of disinvestment during the Depression and the war effort. 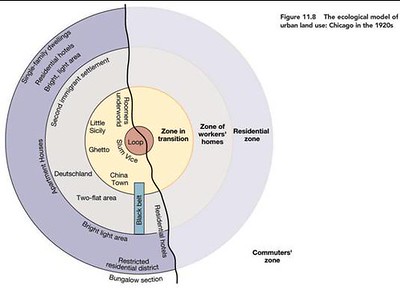 (2) Outmigration was in keeping with the theory of "ecological succession" by University of Chicago urban sociologists, who saw constant out-migration from the innermost areas of cities by the better off.  Unlike in Europe, they didn't see people valuing in-city location as their economic circumstances improved, especially at the core.

(3) Riots in the 60s were response to racialized social control (Michelle Alexander's term, from The New Jim Crow) and a deep sense of abandonment and loss of hope after the assassination of Martin Luther King.

(4) But even after school desegregation spurred outmigration beginning in the mid-1950s, many people still saw value in city location (what we call, wrongly "urban pioneers" as people already lived there, better to term them "urban migrants" or "in-migrants", but different from what the Chicago sociologists described, as this is an in-migration of people with money, or if not money, commitment and skills).

(5) Taking a few decades, year by year in-migration finally hit critical mass about 2000, becoming visible and with a self-replicating momentum in terms of housing demand and neighborhood business district improvement.

In the early 1990s, there was a journal article, I thought in Urban Studies Review that discussed how people started wanting to live "downtown" as opposed to the suburbs. I don't have the cite anymore.  This article is similar, but not the one I am thinking of, "Having a Longer View on Downtown Living," by Professor Eugenie Birch, dating to 2002.

And yes, people less well off (like me) bought in areas that were well located but had been devalued by previous trends. (We first bought in 1989.  Too bad I didn't stay, now the house is four doors down from a Whole Foods Supermarket.) 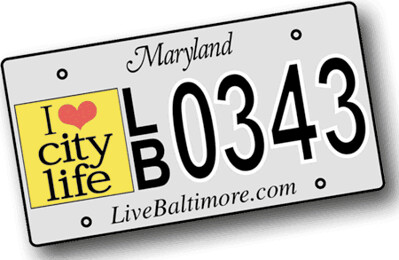 The Live Baltimore residential recruitment program has a term they call "one over neighborhood."

People want to live say in Dupont Circle, but they can't afford to buy, so they choose to live in the next closest place with similar characteristics, in this case Logan Circle. People who can't afford to live in either choose Shaw, etc.

For me, H Street NE was "one over" from Capitol Hill, close to Union Station and close to Downtown.

Note that it was also a neighborhood scarred by riots in 1968.  21 years later when we bought it was still gnarly, and set to become even worse as a result of the crack epidemic.  (Around 2000, I decided if I didn't get involved the neighborhood commercial district would remain crappy, and helped to start a commercial district revitalization initiative.  Our timing happened to be very good, coincident with other trends favoring urban living.)

(6)  Around 2000, trends developed favoring or "revalorize" city living amongst bigger swathes of the market (cf. Rogers' diffusion of innovation curve and think about it in terms of desire to live in the city).

Many observers attribute part of this to tv shows like "Seinfeld" and "Friends" which were set in NYC, as opposed to shows in the past, like "Brady Bunch," set in the suburbs. 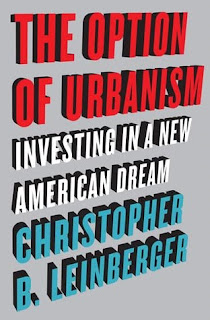 This is described by Christopher Leinberger, in The Option of Urbanism.   He argues that during the  postwar period through the 1990s, 70% of people preferred suburban living, but that sometime in the late 1990s, trends changed.

So that while the 30% of people preferring urban living remained constant (this was the source of year-by-year in-migration), now 30% of people seeking housing were indifferent, interested and willing to live in either cities or suburbs, which stoked demand for urban living, leading to the significant changes in demographics and ownership, and the "reproduction of space" (LeFebvre) in many urban neighborhoods.

So to me, there isn't much new to what the NYT article discusses.  But it's incorrect or at least not very nuanced to draw a direct connection between riots and gentrification.

The neighborhoods were already abandoned through outmigration, riots just made them cheaper and less livable.  As housing demand changed, so did the neighborhoods that were well located.


Other elements contributed to a willingness to live in the city, especially improvements in public safety, and I hate to say, the rise of charter schools, which gave people the sense that they could have some control over the potential for quality K-12 education in urban settings. 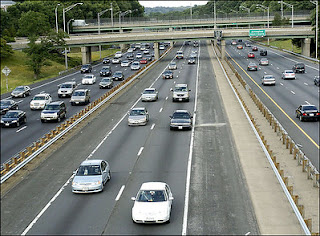 Cars travel south on Virginia's Interstate 395 during rush hour near the King Street exit in Arlington. The state plans to add more than 3,000 Park & Ride spaces along I-95/395 by 2012. 2006 Photo By Leslie E. Kossoff -- Associated Press Photo.

Cities with high frequency transit have another advantage.

Why did you sell your house there? Too rough?

Marriage broke up. After 9/11 my income cratered and I got depressed and spiraled, and made bad decisions.

I was tired of all the s* sure, having been there since 1987, but that wasn't so much the issue.

I wish I had kept my house but I don't miss the mortgage, me and my (now ex) wife made a ton of money on the sale and we had just added a popup so holding it for years longer while living in LA made no sense. I doubt i'll be able to afford something like that again but I've got my house in Deanwood I own outright that was renting to live in. It is quieter too (living directly on 8th is loud)

i'm sure you still got a good profit on yours tho

Well, it was earlier in the cycle. And, as I said I was making bad decisions. But compared to what had been a vision of no appreciation for many years, it wasn't too bad.

Ah, the could have beens...