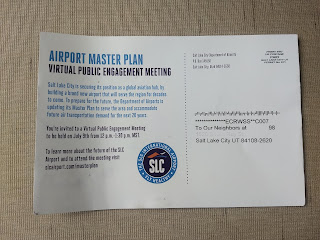 This is an example, for an airport master planning process.

Granted this is an expense.  But people can't argue after a plan is released that they weren't informed, or didn't have an opportunity to participate.

Perhaps I should submit this recent blog entry, "Manhattan Institute misses the point about the value of light rail transit connections to airports | Utility and the network effect: the transit network as a platform."

(The MI report suggested having the light rail connection to the Salt Lake Airport was a waste.

The real issue is that the system is polycentric not monocentric, but I argue that major activity centers need to be served by a transit network to the extent possible, to make it more useful.

To increase intensity of use and ridership, the system needs to have more monocentric elements, especially at the core.)

I commented on a different plan, concerning mobility in the mountains and ski resorts (I think they should use Switzerland as an example, and have aerial gondola or train service; the UTA does provide special bus services to the major ski destinations during the season), and I was surprised to discover that at the end of that phase, I received a response, with a link to the plan, which included a list of the comments and their response.

In DC, I can think of two times where something like this happened, in all the times I submitted comments or testimony on various planning initiatives.