Toronto Star contributing columnist Matt Elliott suggests that restrictions on alcohol consumption in parks be lifted, as one response to the coronavirus ("Condos are shrinking and COVID-19 is less likely to spread outside. So why does Toronto still ban booze in parks?").

Elliott points out that when marijuana was legalized in Toronto, the parks department changed the rules to allow it.

I'd argue against it, not on the grounds of legality, but because of the smell and second hand smoke, in keeping with initiatives to restrict cigarette smoking in parks and on trails (Smoke-Free Tobacco-Free Places Outdoors, Public Health Law Center). 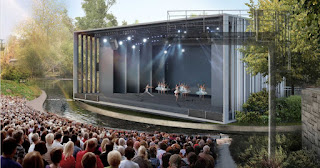 Years ago, seeing a concert at Parc La Fontaine in Montreal, I seem to recall that we brought wine to drink with our dinner.  Apparently, as long as you're consuming alcohol with food, it's legal ("Drinking in Public Montreal Style," TripSavvy).

The biggest problem with alcohol isn't consumption as much as it is the potential for overconsumption, big parties generally and out of control parties specifically.

In 2014, the Wall Street Journal ran an article, "Cities Want Young Families to Play and Stay: New Features Include Parks, Playgrounds and Beer Gardens," about the addition of more adult friendly amenities in parks as a way to better retain younger demographics. From the article:


Doug and Maureen Towne, who live in Phoenix with their children Autumn, 10, and Ben, 2, have long toyed with the idea of moving to the suburbs. Doug works in nearby Scottsdale. Maureen drives back and forth from the Scottsdale school where Autumn will be entering fifth grade. A move, says Ms. Towne, is "definitely tempting."

But for now they are staying put. One factor: plans for a $118 million redesign of the Margaret T. Hance Park, which is near their home. There will be a beer garden and restaurant; an 800-foot zip line for adults and children; splash parks with fountains for kids to cool off; and "playscapes" such as climbing walls with rocks and boulders. "If we stay, I know it's going to be great," Ms. Towne says. ...

HR&A consults with dozens of cities a year, and Ms. [Candace] Damon has noticed one element increasingly featuring in park design: German-style outdoor beer gardens. In the past year, a half-dozen parks she has consulted on have placed beer gardens at or near the top of the list of things the community wants, she says.

Ms. Damon says a beer garden is a playful element that isn't focused on children—but doesn't shun them either. Designs have included nearby play equipment, enough open spaces for running around, and low-key snacks and finger foods. "It's about creating a space where adults can gather with children, without having to be solely focused on taking care of the kids," she says. 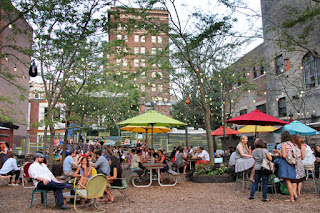 The Philadelphia Horticulture Society has an extensive pop up "beer garden" program.  Most of the spaces are on private property, but one is in Franklin Park near the Philadelphia Museum of Art.

The PHS program has multiple gardens, but mostly in the Center City.

The PHS program has sparked friendly competition.  The Philadelphia Parks and Recreation Department/Fairmount Conservancy now offer a pop up program of their own, rotating through almost two dozen parks in a season. 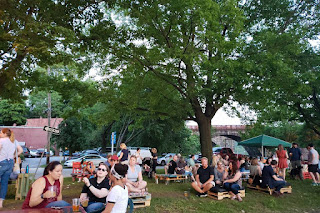 The separately managed Spruce Harbor Park also has a summer beer garden, as do other neighborhood locations.

Conclusion.  The issue is whether or not alcohol is legal if you bring it yourself versus having to buy it to consume it, in more controlled settings, like a cordoned off beer garden.

How to do it management and regulatory-wise.  I think the Montreal rule is reasonable, although probably difficult to enforce: (1) it's legal if you're eating and (2) I would add a limit on how many drinks can be consumed; and probably (3) restrictions on large groups and alcohol consumption; (4) unless specifically permitted.  (5) Creating controlled beer gardens as an activation initiative is a separate issue.

What doesn't help are the unwritten rules associated with public drinking, such as "don't give us a reason to investigate your picnic due to noise, and we won't bother you". Such ambiguity doesn't engender law-abiding middle class people (who may have background checks for their jobs) to partake in a glass of wine or whatever.

Many of the rules/law are written for ulterior purposes. The anti-garbage/waste undercurrent is noble enough, but how is that any different than food waste that can, and does, get left behind.

But the elephant in the room is definitely the presence of the homeless. I don't know if the alcoholic homeless man (i.e. the "town drunk") is a trope at this point, but it has to be what's driving many of the laws against it.

Ironically, opening up the parks for responsible alcoholic consumption would create and incentive for local merchants and governments to keep the place clean and welcoming.

In Takoma, there "was" a park, not well designed from an eyes on the street standpoint, where a group of neighborhood "bad seeds" (they weren't homeless, but the bad seed of the family) who would drink to the point of intoxification, harass people, etc.

The city's response was to redesign it from a park space to a gated "garden."

But in terms of "unwritten rules" this is an issue, and it would be problematic to have different rules for "downtown" parks versus outlying parks.

I do tend to the default that it's reasonable to manage and aim to limit disorder and nuisance behavior.

As we used to say on H Street back in the day. "It isn't the drinking per se. It's drinking too much, carrying on, and throwing the empties in the street."

A few years ago, a guy drinking in a bus shelter on H Street, maybe homeless probably drunk, through his can in the street. I stopped my bike, picked up the can, and threw it back at him.

Although this was the basic justification for the creation of bans on singles, and what in Washington State they call "alcohol impact areas," which allows for restrictions on the sales of singles, because of the impact on emergency services "consumption" by the homeless.