Enforcement involves traffic safety initiatives by police departments including ticketing.
The idea was that traffic enforcement should be directed "against" motor vehicle operators, who put more vulnerable users (bicyclists and pedestrians) at risk when they drive unsafely or recklessly.
Later, a sixth E was added:
I wrote about this as an idea after attending a session at the National Bike Summit ("Equity as the sixth "E" in bike and pedestrian planning," 2014).
But it turns out that Minneapolis had added Equity to their 2011 bicycle master plan ("Revisiting bicycle (and pedestrian) planning and the 6th 'E': equity and the City of Minneapolis Bicycle Master Plan," 2015).  From the blog entry:
In the Tacoma Washington Safe Routes to School Action Plan, they've added what would be a seventh:
which more specifically prioritizes ongoing programming and civic engagement initiatives.
Enforcement has been removed from the 5 E framework.  Apparently in 2020, the League of American Bicyclists removed Enforcement from the framework ("PEDALING TOWARD A MORE JUST BFA PROGRAM: REMOVING “ENFORCEMENT” FROM OUR FRAMEWORK") because:

... “Enforcement” does not equal “Safety” for many People of Color, particularly Black Americans. The racial disparities in over-policing of our streets is a barrier that prevents many from considering biking for transportation or recreation. Enforcement as a stand-alone traffic safety tactic is not particularly effective in achieving long-term safety outcomes for anyone biking or walking.

There's no question that this is an issue.  For example, the LA County Sheriff's Department has used a form of "stop and frisk" on bicyclists, figuring that people who ride bikes are poor and likely to use drugs ("L.A. sheriff’s deputies use minor stops to search bicyclists, with Latinos hit hardest" and "7 of every 10 bike stops by L.A. sheriff’s deputies involve Latino cyclists," Los Angeles Times).
And Seattle repealed its bike helmet requirement, in part they said, because it was disproportionately enforced against people of color ("Seattle Bike Helmet Rule Is Dropped Amid Racial Justice Concerns," New York Times). 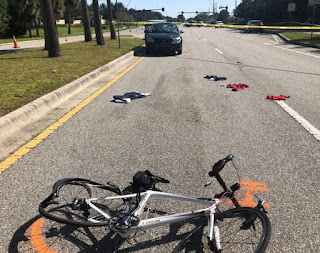 But at the same time, there is no question that reckless, dangerous, and inattentive motor vehicle operation puts more vulnerable users at risk.
-- "May is National Bike Month: Advocating for Vulnerable Road User laws," 2021
-- "A reminder about how the entitlement of automobility is embedded into law and democratizes death by accident," 2014
Rather than drop Enforcement from the bicycle planning framework--although because LAB has done so, it becomes a done deal--traffic safety enforcement needs to be reformed.
One way is to apply the equity lens to enforcement, within the 5 E framework, to ensure enforcement actions are fair.  From the article on Seattle:

“The question before us yesterday wasn’t the efficacy of helmets,” said Girmay Zahilay, a board member who is also a member of the King County Council. “The question before us was whether a helmet law that’s enforced by police on balance produces results that outweigh the harm that that law creates.” ...
The board of health, made up of elected officials and appointed medical experts from across the county, began to scrutinize the helmet rule in 2020 after an analysis of court records from Crosscut, a local news site, showed that it was rarely enforced, and enforced disproportionately when it was. Since 2017, Seattle police had given just 117 helmet citations, over 40 percent of which went to people who were homeless. Since 2019, 60 percent of citations went to people who were homeless.
A separate analysis from Central Seattle Greenways, a safe streets advocacy group, found that Black cyclists were almost four times as likely to receive a citation for violating the helmet requirement as white cyclists. Native American cyclists were just over twice as likely to receive one as white cyclists. ...

Ms. Shannon’s nephew was just 8 years old when he and three friends were stopped by an officer a few blocks from their houses for not wearing helmets, Ms. Shannon said. She said the officer accused them of stealing the bikes. “Until this day my nephew doesn’t ride a bike,” Ms. Shannon said. “He’s never forgotten that.”

WRT the general point that such regulations are disproportionately enforced, the Times article also reports on a study in Chicago:

Across the country, other kinds of biking regulations have also been found to be enforced in discriminatory ways.

In Chicago, a study found that tickets were issued to cyclists eight times more often in majority-Black parts of the city. An investigation by the U.S. Department of Justice found that 73 percent of bicycle stops in Tampa, Fla., between 2014 and 2015 involved Black cyclists, despite the fact that Black people made up 26 percent of the population.

“The data revealed that the stops did not reduce crime or produce any other positive outcome,” such as reducing bike crashes or injuries, the report said.

So I understand the concern.  Again though, the point shouldn't be to eliminate enforcement but to fix it.  And the basic point is that enforcement activity should be directed to motor vehicle operation, which is far more problematic. 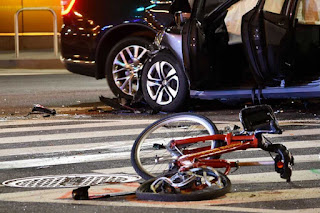 The Traffic Company is primarily composed of police officers assigned to motorcycles to provide traffic enforcement, accident investigations and to raise public awareness of traffic-safety measures. The company’s primary mission is to reduce injuries and fatalities and to provide traffic and pedestrian safety through investigations and traffic management. The company’s involvement is key in major citywide events, such as parades and demonstrations, and provides essential services in the event of a major disaster. 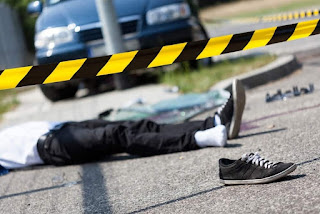 Change criminal justice processes to make motor vehicle operators more responsible for their actions.  Similarly, a major problem with traffic safety is that it privileges motor vehicle operators by making negligence almost completely consequence free, unless the driver is impaired (alcohol or drugs) or super wantonly reckless (e.g., driving faster than 100mph).
The recent rise in driving-related fatalities is mostly due to an increase in reckless driving ("As U.S. traffic deaths rise to highest point since 2007, push for safer streets continues," Staten Island Advance).  WRT this rise, as someone recently pointed out on an e-list I'm on, the design of the road network hasn't changed, so the problem is likely driver behavior.
The recent blog entry, "Revisiting Vision Zero in DC and NYC" (2021) has 11 points, which are all necessary, but failed to include a 12th, reforming criminal justice systems related to traffic safety and enforcement.
Even though they dropped Enforcement from the E's planning framework, ironically, LAB has a Model Vulnerable User Law, which has not been enacted anywhere in the US.
Changing criminal justice practices as they relate to bicyclists, pedestrians, and other "vulnerable users" vis a vis motor vehicles ought to be a key element of what should be re-termed in the E framework as:
Other "Enforcement" related actions that are necessary:
-- Legalizing the Idaho Stop for bicyclists, which would force a recognition of the need for differentiated laws wrt different types of "traffic"
-- 20 mph speed limits on residential streets
-- While theoretically "pedestrians have the right of way" in practice that's not the case.  This occurred to me a number of years ago, when I was crossing from one side of the street to the other in front of my house, but I waited for a car to cross.  The car should have deferred to me, but I couldn't rely on that happening, so for safety reasons I deferred to the car.
I'm sure there are many others.
Towards a Seven E Framework.  Should be ordered like this:

Again, we have to separate misuse of enforcement from the need for enforcement to improve traffic safety.

"Under the law, drivers can no longer be stopped for:

Temporary registration permits that are in the wrong location, but otherwise clearly displayed in the rear window.

Unfastened registration plates, as long as they are still visible.

A single brake or headlight out.

Operation of vehicle without official certificate of inspection.

Drivers may still receive a secondary-offense ticket for any of the listed violations if they’re pulled over for a separate, primary offense like dangerous driving."

===
So except for the one about headlights or brake lights out, this change isn't unreasonable.

It happens that in Salt Lake City, cars are frequently broken into at trailheads. I've advocated for security plans including cameras.

Apparently a study in Chicago found that Blacks and Latinos disproportionately receive tickets for cycling on the sidewalk.

Chicago police issued sidewalk cycling tickets more often in Black and Latino areas in recent years, even as they issued fewer tickets overall, according to a recent study of bike ticketing practices.

The findings highlight policing practices in Black and Latino neighborhoods in the city, and the unequal distribution of the city’s bike lanes and resources, said study author Jesus Barajas, an assistant professor at the University of California, Davis.

In the neighborhoods most affected, high cycling ticket rates could put a damper on jobs, residents’ health and efforts to reduce violence, said Olatunji Oboi Reed, president and CEO of racial equity-focused nonprofit Equiticity, which partnered on the study.

TRB is going to study the issue.

"Assessing and Mitigating Racial Disparities in the Enforcement of Pedestrian, Bicycle, and Micromobility Traffic-Related Laws"