To and from origin stations can be difficult: More on the Silver Line and intra-neighborhood transit (tertiary network)

One item was creating intra-neighborhood shuttle services to move people to and from new transit stations without them having to drive. 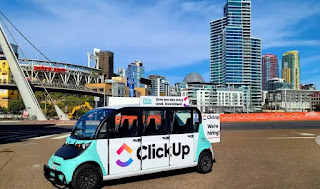 Note that the original PL series on Silver Spring did discuss an intra core shuttle system to complement their parking structures and to allow for converting Fenton Avenue to a sustainable mobility corridor.  But at the time I didn't think to extend this tertiary transit concept to the transit sheds of other PL stations.

The San Diego electric shuttle service FRED, was mentioned as an example. Another example is the taxi collectif program of the STM transit system in Montreal, which operates at end of line stations.

In last week's piece on the opening of the second phase of the Silver Line ("Metrorail Silver Line phase two opening this week"), and in the original piece ("Using the Silver Line as the priming event, what would a transit network improvement program look like for NoVA?") I never did add a similar point.

Although I did here, "Tysons (Corner) 10 Years after the plan to make it more walkable: the necessity of implementation mechanisms" (2020).

This comes up in a letter to the editor to the Post ("Why I won’t take the Silver Line to Dulles"). The author makes the point that it's not easy to get from his house to a subway station, especially for trips to the airport, which include luggage.  From the letter:

Taking the Silver Line to Washington Dulles International Airport is impractical because I don’t live within walking distance of a Metro station. Instead, I’d have to walk 10 minutes to a bus that runs every 30 minutes, or take a taxi or a ride-hailing service to a Metro station. I can’t drive my own car because overnight parking is allowed only at four stations: Greenbelt, Huntington, Franconia-Springfield and Wiehle-Reston East. According to Metro’s website, “each of these stations has between 15 and 17 spaces allocated for multiday use of up to 10 days. Availability is on a first-come, first-served basis.” That’s a total of fewer than 65 spaces for the 15 million passengers Dulles serves each year, along with people who use these spaces when they travel from Reagan National Airport or Union Station.

I have many pieces on airport transportation related issues:

but I don't always acknowledge the issue that it can be a PITA to get to and from an airport with luggage, from your house to a station (and back).

As any transit user knows, once in a great while every transfer works beautifully, with little if any waiting (e.g., I still remember an amazing bus from BWI to Greenbelt Metro, Metro to Petworth, bus at Petworth station, which let me off a couple blocks from home, although mostly I could walk three quarters of a mile to and from Takoma Station provided I didn't have too much luggage, then again, in a fit of pique, once I walked from National Airport late at night, to Capitol Hill in DC, to get a car share).

An intra-neighborhood shuttle, an element of what I call the tertiary transit (sub)network, would address the problem.  Some examples exist, especially in Tempe, Arizona.  Most function more in terms of facilitating access to commercial districts.

-- "Earth Day and intra-neighborhood transit," 2009
-- "Intra-neighborhood (tertiary) transit revisited because of new San Diego service," 2016
-- "Why microtransit isn't likely to be a source of great profits for private firms: labor," 2019 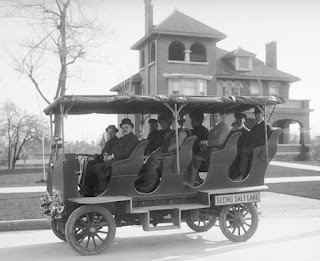 Interestingly, an Instagram feed about Salt Lake City history recently had a feature on jitneys.

Then and now, jitneys (like ride hailing) are often seen as a substitute and competitor to public transit.  Often this is true.

OTOH, they can complement and extend public transit too, by providing links between transit stops and stations and your origin and destination points.

If Metro wants high ridership on the Silver Line to Dulles, it should offer plentiful reserved multiday parking at a variety of stations, perhaps charging for the number of days the vehicle will be parked. Though it might take years to build additional garages to meet all of the demand, Metro could offer outdoor parking now by leasing sections of underused shopping center parking lots and shuttling passengers to the nearest Metro station.

The solution is shuttle/jitney service to and from stations, rather than building more parking.

Tertiary Network concept.  The transit network framework I worked out is an extension on how Arlington County, Virginia, in their 2005 Transportation Plan, defined a Primary and a Secondary Transit Network.

I extended the concept to multiple scales.  Within a Metropolitan Area at the metropolitan, suburban and center city scales, and primary, secondary, and tertiary within each subnetwork.

WTOP radio article on holiday usage via Silver Line of Dulles Airport, 9% of trips. We need to have this kind of TDM information more generally, for all trips.

An airports authority official said about 15% of travelers currently use Metro’s blue and yellow lines at Reagan National Airport.

======
Need plans to increase the percentage. Although as I have said, it's a pain to carry luggage.

Brightline rail in South Florida has a superb program to get people to and from the station at the beginning/end of their trip.

===
For those who prefer Richmond International Airport (RIC) as the point of departure for foreign or domestic travel, the completed Silver Line should enhance Dulles’s lure. Rather than confronting Northern Virginia’s nerve-racking automotive traffic, long-term parking fees, or expensive taxi or Uber costs, Richmond travelers now have another option. They can catch a northbound train at either of Richmond’s two Amtrak stations and deboard in Alexandria. From there, it’s only a few steps to the connecting Metrorail, and then a 55-minute, $4 sprint to Dulles.

Brightline is a for profit passenger railroad aiming to service from Miami in South Florida to Tampa in Central Florida. It's currently operative between Miami, Fort Lauderdale and Palm Beach.

They are probably international best practice at implementing "last mile" connecting services between the existing stations and area destinations. Some of the services cost additionally, some don't.