A few weeks ago, celebrity chef Bryan Voltaggio was quoted as saying that DC's hotness as a restaurant district is over, that Baltimore is the new hot market ("VBryan Voltaggio: Baltimore's restaurant scene is ripe for growth while D.C. is getting 'saturated'," Baltimore Business Journal).

He's absolutely right. Despite all the hype of DC's Obama-related (at least initially) coolness, the reality is that the city is still a small market (even at 640,000 people), even though the population has been increasing and younger residents go out to eat and drink fairly often.

At the end of the day, there is a limit to how much growth can be sustained.  And rents are pretty high too, making success more precarious.

And as different areas of the city wax and wane according to fashion, restaurants lose their verve and/or business, and if they have issues in their business model or operation, they are vulnerable to closure. 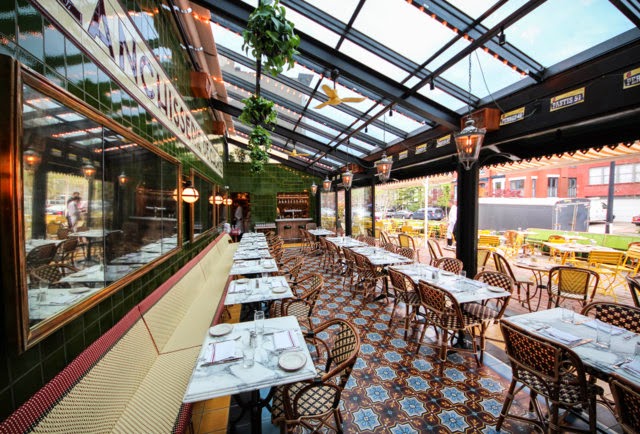 Le Diplomate on 14th Street sucks a lot of business from other restaurants.  A big deal is the opening of Le Diplomate, a Stephen Starr restaurant (he's known for restaurants in his Philadelphia base as well as NYC).

That restaurant allegedly sells $12 million of food and drink in a year ("How Stephen Starr made Le Diplomate the hottest table," Post).  Unless it induces more people to go out to eat and drink, that $12 million comes out of the business of other establishments...

Outlying restaurant districts outside the city's core like Cleveland Park.  Outlying districts have other issues.  Bethesda and Silver Spring are regional restaurant destinations for Montgomery County, but they are supported by a dense road network and a system of parking structures.

For a variety of reasons, DC doesn't have a similar kind of system and restaurants in areas that are automobile-focused need to provide parking, or a pick up service--that could be a good use for a Google driveable car, see "Google self-driving car is polite to cyclists" from GGW).

Besides high rents, I have to believe that falling patronage played a part.  Palena's problems were exacerbated by overexpansion. 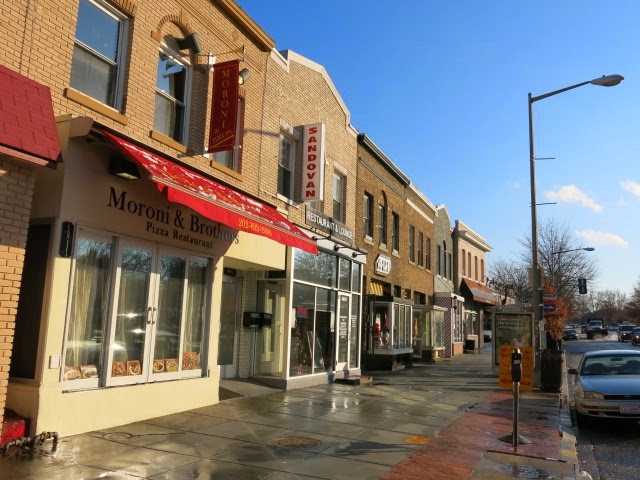 The 4800 block of Georgia Avenue has some nice building stock, but it isn't in a walkable area (it's a remnant from the days of streetcar service).  Image from PopVille.

And Georgia Avenue.  The City Paper has a piece, "“Dying” Georgia Avenue Block Bodes Ill for the Neighborhood," about the failure of restaurants in a one-time ("Years of Practice Have Perfected This Petworth Pizza," Post 2007 article) burgeoning restaurant district on Georgia Avenue near Arkansas Avenue, north of Petworth.

That area isn't a walking neighborhood and the restaurants couldn't maintain the level of business they needed plus they seemed to sustain a fair number of burglaries (for better or worse, this kind of anti-business action is typical in DC commercial areas, especially during the start up phases).

I imagine they were attracted to the area because of comparatively lower rents, but in the DC case, low rents usually mean less potential business and it's a tough tradeoff, especially when you are dependent on automobile trips not walking trips, for the bulk of your patronage.

Walkability and density matter to restaurant success in DC.  Note that Bloomingdale is on the rise, with one of the city's best restaurants, Red Hen ("Proof veterans plan to hatch The Red Hen," Post) joining others like Rustik Tavern. Bloomingdale, like the Georgia Avenue and Cleveland Park districts, doesn't have a lot of parking available to people who might be inclined to drive there. 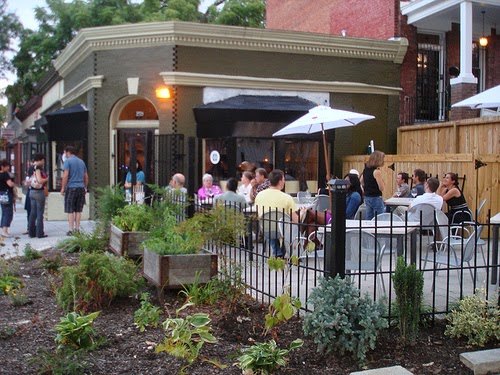 Walk scores as an indicator of restaurant potential. But the difference is that Bloomingdale, like the little restaurant district on 11th Street in Columbia Heights (there are now something like 6-8 restaurants in two blocks there including the very cool neighborhood bar, Wonderland Ballroom), is in a rowhouse neighborhood and many patrons live within walking distance--Columbia Heights also is denser with many apartment buildings, providing even more of a residential base for the restaurant business.

Richard's Rules for Restaurant-Driven Revitalization are still relevant (and prescient...).  My original post on restaurants focused on restaurants as an element of revitalization and re-sampling of previously abandoned commercial districts recommended focusing on developing a local clientele willing to eat at the restaurant multiple times each week.  That means that the cuisine has to be accessible and not too expensively priced.

(Frankly, this post doesn't say anything much different from the 2013 post, although I guess from an episodic standpoint, the continued failure of restaurants is news.)

But for restauranteurs it's going to be particularly important to focus on landing the right location.  And those districts that are successful because of their walkability and density will likely continue to grow (Takoma is one such district, fortunately for me), while less well favored locations will continue to be difficult places to locate successful businesses.

People have to want to spend time in the place/commercial district outside of the restaurant, so placemaking elements will be increasingly important.

Diplomat is both a benefit and a curse to 14th st.

I can't say if it sucking money down from other restaurants. My observation is probably not. And they are bringing a whole new crowd (50+) to 14th st I call it the new Bethesda.

And because of the age/wealth of that crowd, and bad location, they are mostly arriving by car. The valet parking is getting out of hand. Uber both helps and hurts as well.

Bigger problem is the economies of scale that Diplomat gets.

So I'd say the walk score is more correlative than predictive.

Building for a hyper-local client base is a good strategy, but you can't sustain much high end on that basis. Even Fiola Mare suffers from that.

yes. I guess I didn't make that clear. High end has to draw from a much bigger RTA than "neighborhood" places. But at the same time, there's only so much high end out there. Which is why focusing on the high end only works in certain places.

I didn't think so much about Uber as a way to not have to park.