DC's Schools Chancellor, Kaya Henderson, left her position at the end of September.  The Post, in articles and an editorial hailed her great accomplishments, although they are arguable, and never came close to fulfilling the measurable promises first made by Michelle Rhee to her foundation overlords -- Guy Brandenburg's series of articles evaluating Rhee's promises found a pass rate of 1.5 on 62 items ("Did Michelle Rhee Actually Close Those Achievement Gaps").

The Washington City Paper has a particularly blistering article, "Left Behind: How Kaya Henderson Failed At-Risk DCPS Students," assessing the Henderson era, as Kaya Henderson missed most of her goals on improving educational outcomes for children from low-income households.


... A 40/40 school is among the 40 lowest performing schools in the District. When she announced her plan, Henderson said her second-highest priority—“invest in struggling schools”—was to increase proficiency rates in those schools by 40 percentage points by the end of the current school year. Initially, DCPS defined “proficiency” according to the D.C. Comprehensive Assessment System (DC-CAS), designed to test mastery of English, math, and science according to local “content standards,” but it abandoned that metric after the 2013-2014 school year.

Schools designated as 40/40 schools have certain traits in common: They mostly reside in parts of the city plagued by high crime, high unemployment, high rates of disease and mortality, and high numbers of single-mother households. More than half are elementary schools, which experts agree is the educational stage that is most critical to any future prospects for success in academics—or life. ...

As Kaya Henderson departs DCPS, the schools are nowhere close to the goal she set, with marginal or inconsistent gains in some schools, stagnation in some, and losses in others, according to a City Paper review of DCPS performance data. DCPS, after four years, still lists 10 of the 40/40 elementary schools as “priority” schools, meaning they still need “intense support to address low performance of all students” and require “special quality monitoring and professional development.” Six are labeled “focus” schools, meaning they need “targeted support to address large achievement gaps,” according to the DCPS website. Just five are considered to be either “rising” or “developing.”

Which is not surprising, given that investment in 40/40 schools has ranged from non-existent to inequitable to compromised, according to DCPS funding data, proficiency scores, budget experts, and education watchdogs.

The resignation of Kaya Henderson offered the city and its media an opportunity to take stock, to compare DC's "reform" efforts to other cities, to gauge the impact of the charter schools on the traditional school system, to look in-depth at specific initiatives, and even to compare DC to other best practice K-12 efforts in the area (Arlington County, Montgomery County).

Outside of the City Paper article and some e-list discussion, such a review did not occur, even to how the Mayor inadequately followed the law on selecting a chancellor that was passed as part of shifting authority of the school system over to the Mayor from an elected school board ("Antwan Wilson confirmed as chancellor of DC Public Schools," Post).

Review: Lots of Pain, Minimal Gain. Perhaps the biggest problem in "reforming" K-12 education has to do with asking and answering the wrong questions ("Missing the most fundamental point about urban educational reform).

And ideology in terms of an anti-government or neoliberalism agenda that promotes charter schools, private schools and vouchers, or home schooling ("Mitt Romney: Trump has made a smart choice for education secretary," Washington Post) over what anti-government types are now calling, pejoratively,"government schools"

Although we must concede that school systems become bureaucratic and lose focus on what matters. Teacher's unions often end up focusing on maximizing pay. And too often personnel decisions can be particularly arbitrary--I know plenty of good teachers who got screwed by vindictive principals or other school administrators.

A failure to focus on the need for different types of resources.  But comparably to how I argue that the problem with a disinvested property is lack of investment and the solution to disinvestment is not demolition but investment, the problems around teaching low income children aren't solved by forcing students to spend lots of time studying for and taking tests or to fire the teachers, but are solved by providing additional, focused and the "right" resources necessary to address economic and other gaps that make it much harder for children from such households to succeed.

I used to get furious in how Michelle Rhee was allowed to shift the argument from resources to teacher blaming, when just about any successful charter school is successful because they have more resources in terms of special programs, more instruction time, etc. For example, the Harlem Children's Zone model ("The Harlem Project," New York Times).

But rather than argue for more targeted resources and innovative programs for children and schools in need along the lines discussed in various past blog entries ("Powerful story of how Bristol Virginia elementary school deals with extremely impoverished students," "Creating cultures of excellence in schooling," "International Baccalaureate program at an impoverished high school in Seattle as a way to improve academic outcomes," "Back to school as a reason to consider schools issues comprehensively"), the focus in DC was on tests and demonizing "bad teaching" (and failing to acknowledge that "bad teachers" were produced by the system, and that therefore, the system has some responsibility for dealing with that, rather than tossing people out.

Community Schools model as an alternative. A model for delivering an actual program for the "40/40" schools is the Community Schools concept, which is not new and pre-dates programs like the Harlem Children's Zone. It's about bringing to impoverished schools a wide variety of additional types of resources.

The initiative came at the instigation of the advocacy group, Austin Voices for Education and Youth. 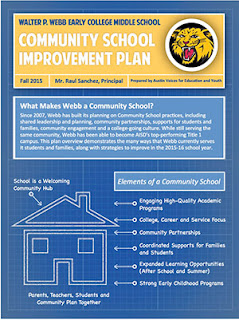 
From 2010 to 2015, Webb went from the lowest-performing middle school in Austin ISD, based on its test scores, to one of its best. Its enrollment has grown 55 percent, and fewer students are leaving the school mid-year. Reagan’s enrollment has more than doubled and its graduation rate has improved from 48 percent to 85 percent.

The Observer says the report:

It's not that DCPS hasn't implemented bits and pieces of these kinds of programs here and there across the system.  But they haven't developed and implemented a comprehensive program.

And the Webb and Reagan schools are demographically comparable to the many school buildings that DCPS closed in Wards 7 and 8 ("Rethinking community planning around maintaining neighborhood civic assets and anchors").

What has prevented development of comparable stories of success in DC is a complete failure to develop, fund, and implement a real plan for improvement--asking and answering the right questions instead of the wrong ones.

And it's not apparent that anything will change with the new regime.

(a) The DCPS shall be administered by a Chancellor, who shall be appointed pursuant

(1) Be the chief executive officer of DCPS;
(2) Be qualified by experience and training for the position; and
(3) Serve at the pleasure of the Mayor.

(b)(1) Prior to the selection of a nominee for Chancellor, the Mayor shall:

(A) Establish a review panel of teachers, including representatives of the Washington Teachers Union, parents, and students ("panel") to aid the Mayor in his or her selection of Chancellor;

(B) Provide the resumes and other pertinent information pertaining to the individuals under consideration, if any, to the panel; and

(C) Convene a meeting of the panel to hear the opinions and recommendations of the panel.

(2) The Mayor shall consider the opinions and recommendations of the panel in making his or her nomination and shall give great weight to any recommendation of the Washington Teachers Union.

of course this all begs the question- who is going to do something about the out of control children and teenagers who relentlessly maraud in the metro system assaulting and robbing- even murdering people at random? Just last month one of my neighbors was punched in the face and head and sustained a concussion- the police would do nothing- and as he was at a kiosk reporting this crime another man came up and said that he had also been attacked and robbed by aging of teens on the same train. My neighbor has since put his house here in DC up for sale- this incident totally wrecked his life. Isn't it about time metro started adding security or allowing police free subway rides?
Clearly something must be done but NOBODY is doing anything about this problem.

This article is about Mass. schooling, and "what's next" after in the Nov. election, a referendum allowing for more charter schools did not pass.

This article focuses on "autonomy" and empowering principals (and teachers).

wrt your comments, I think police officers in uniform can ride transit free. They aren't likely to though, they probably drive to their jobs. Many don't live in the city, and they probably bring other clothes, etc.

BUT it would be useful to have true crime statistics for incidents on the WMATA system, separate from each jurisdiction's normal reporting.

wrt WMATA, while they have the police force, the individual jurisdictions especially DC MPD, do a lot of the first response.

Anyway, with some data we could get a handle on this. ANd they probably do need more police, especially when you include bus service, where undercover officers do operate as well.