At the Washington Post Transformers presentation earlier this week on Smart Cities, one of the presenters was Jeff Tumlin, a principal at the forward thinking transportation consultancy Nelson-Nygaard.

Jeff is a great speaker, although what sounded "transformational" to many people who came up to him afterwards was to me, merely stuff I've been hearing for the last 13-15 years, including from Jeff. 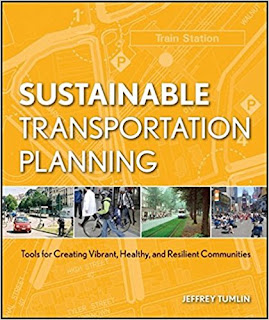 He made a couple of very important points, one of which will be covered in another piece.

In discussing the general fall off in transit usage over the past year, which is partly in response to continued low gas prices, but also the impact of ride hailing services on transit use ("Why selling your car to take Uber or Lyft is a problem for cities," CNN), he discussed Seattle as a counter-example.

Technically, Seattle's local bus transit is provided by the county, through the King County Metro transit agency, and the agency has one of the largest bus fleets in the US, especially for a city of its size, including a network of electric trolleybuses. 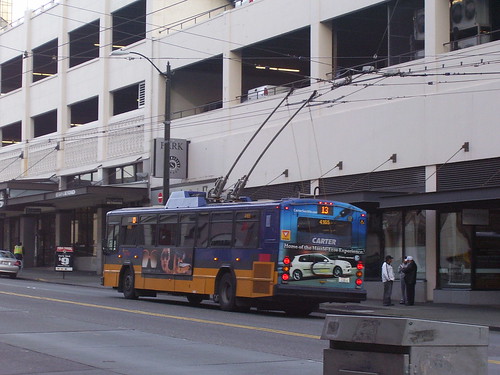 Among its initiatives, the transit agency has a robust set of metrics for setting service levels, has been implementing a rapid bus network, and is working to simplify its fare system ("Metro to charge a simplified, $2.75 flat fare for bus rides next year," Seattle Times).

The city used to have a downtown free fare zone, but it was dropped as a result of the 2008 recession's impact on transit agency budgets.

SDOT works very closely with the agency, and separately, the City of Seattle is one of the nation's leaders in innovative transportation planning.

To deal with the city's rapid growth ("Can Seattle handle its own growth," The Atlantic) in the digital economy era, Seattle has prioritized transit movement on the city's street network, making bus transit faster.  As Jeff pointed out, this has had real impact, so that Seattle is one of the only major cities in the US where transit ridership is increasing ("How Seattle Got More People to Ride the Bus," CityLab).

Mobility throughput: counting people instead of cars.  While I just mentioned the King Street streetcar prioritization test that launched earlier this week in Toronto, that touches on the thing that Jeff mentioned that seemed revelatory to people in the audience, to focus on moving "people" not cars, or overall throughput, which is what they are doing in Seattle.

In terms of its capture of total trips, King Street streetcar is an outlier, where 75% of the mobility throughput (65,000 people) on the corridor is by streetcar and 25% cars (20,000 vehicle trips), with such a high percentage of the throughput being captured by transit.

I know that on many of DC's primary bus routes, transit as a proportion of the throughput isn't quite as high, but is still above 40%, which is very good. 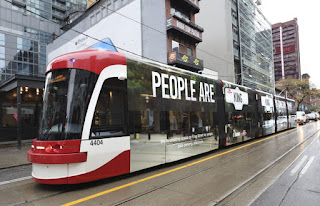 King St. has changed to more pedestrian and TTC friendly with cars only allowed to go a single block along the street before having to turn off. (RICHARD LAUTENS / TORONTO STAR). The TTC announces the King Street streetcar prioritization project on vehicle livery for the streetcar line.


Shawn Micaleff, a columnist for the Toronto Star, has a piece on the King Street initiative, "King St. pilot project does what big cities around the world are doing," writing:


One of my earliest memories of feeling frustrated in Toronto was riding a streetcar. The streetcars themselves were fine: elegant street ships sailing the city’s rail network like an electric nervous system.

What was confounding was that one lone car turning left, often just carrying one driver, could hold up an entire streetcar filled with dozens of people, sometimes up to 130 or over 200 people, depending on if it was a short or long streetcar. Other times there were just too many cars on the road to allow quick passage of a mass transit vehicle.

Something seemed out of whack. How could this be? Was there no political courage in this new city of mine to give vehicles carrying many people a quicker passage? My newcomer’s naïveté was soon corrected.

I think this is one of the most important surface transportation initiatives right now in North America ("A transit miracle on King St. shows how it can work," Star), because despite the headline of the Micaleff column, the fact of the matter is that most cities are not prioritizing transit in this way, because the electorate continues to be car-centric, so that elected officials don't have the cover to be able to pursue transit prioritization on city streets.

One of the people interviewed after the change said that lunchtime trips on the King Street streetcar are now three times faster.

Market Street in San Francisco is another street where streetcars should be prioritized in the same way as in Toronto (discussed within this blog entry, "It's been a drawn out process, but DC is in the process of creating transitways on 16th Street NW"). 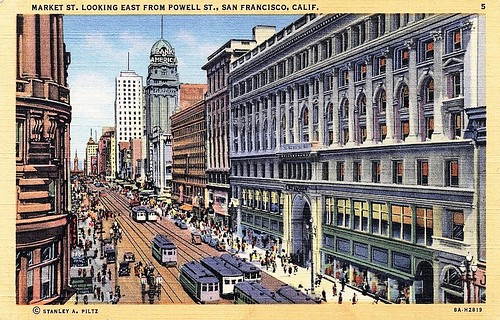 Note that at one point, Market Street had four streetcar tracks. At some point, two were removed. Note too that the desire to create a subway system, which eventually culminated in MUNI Metro, was to remove streetcars from surface streets in favor of cars.

And a special L Line replacement bus service in Manhattan ought to have a similar treatment ("RPA/Transit Riders Alliance proposal to respond to the L Subway shutdown includes a dedicated transitway on 14th Street in Manhattan").

One of Micaleff's examples is the rebalancing of streetspace between pedestrians and cars in Manhattan, but that rebalancing hasn't been extended to transit-prioritized streets in the same was as King Street, even though NYC has been developing an extensive network of transit priority lanes.

Editorial, positive, from the Toronto Globe and Mail:

why toronto is still a streetcar city:

Toronto and SF, and to some extent Philadelphia, and New Orleans, are the only major North American cities with legacy streetcar systems, although SF's was "out of service" for sometime.

Cities like Zurich and Melbourne employ streetcars to a great extent, and would hardly be called "out of date" places.

MBTA in Boston is looking to have more dedicated transitways.

A test in Everett where such a lane was created resulted in a 20% improvement in time throughput.

The Toronto Star reports that restauranteurs report that sales are done, due to loss of parking, confusion, and fear of getting tickets.

Probably, they need to institute a parking wayfinding system, including an integrated valet parking system at night at a minimum, along the lines of what I suggested for Silver Spring in item #5: