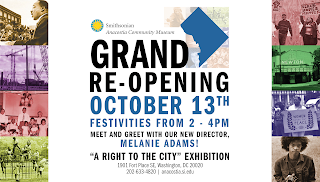 Why this is important is not so much a chance to meet the new director, but to see the fabulous "Right to the City" exhibit, which I think is a great model for showing how to present community history at the neighborhood scale.

The neighborhoods it covers are Adams-Morgan, Anacostia, Brookland, Chinatown, Shaw, and Southwest.

It takes 3-4 hours to go through the exhibit. It is rich and deep. One of the great scores is footage from ABC-TV featuring Dr. Martin Luther King, Jr. riding in a parade and his speech to the group, a Shaw neighborhood improvement initiative led by civil rights activist Walter Fauntroy, Jr., who later became DC's Congressional Delegate.

====
For me, having been in DC since 1987, I feel like civil society today here is pretty weak. The exhibit shows that in the 1960s and 1970s especially that was decidedly not the case.