Personally, I think it's better to not have off-year elections because the voter turnout is so low usually.  OTOH, it can prevent "nationalization" of what should be local elections, which can happen when they are part of the "federal" election cycle.

A number of communities, like Boston, Seattle, and Salt Lake City, have council and/or mayoral elections.  A handful of states (Kentucky, Mississippi, ) have governors races, Virginia has all of its House and Senate legislators up for elections.

People look at these votes as a way to forecast what might happen in next year's election cycle, which includes the Presidential race, but it's hard to say.

For me, what happens is more likely to reinforce trends.  Conservative places are likely to stay conservative, places undergoing political change, like Virginia, are likely to continue on that trend ("All politics used to be local. Then along came Trump. ," Washington Post).

Maybe in conservative places, strong Democratic candidates will poll better, but still seem likely to use, since in off-year elections, fewer Democratic voters tend to come out to vote. 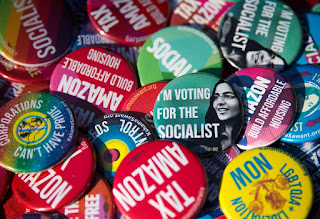 1.  Will the couple million dollars Amazon and other corporate interests put into the City of Seattle elections shift the Council to pro-business? ("Amazon Tests 'Soul of Seattle' With Deluge of Election Cash," New York Times). '

Tech companies want to ward off future taxation initiatives which could effect their bottom line.

Many observers think that Socialist Kshama Sawant in District 3 could fall as a result of the more than $1 million in campaign spending directed on behalf of her opponent.

Seattle no longer is a two newspaper town.  The Seattle Times reliable endorses pro-business candidates.  But there, The Stranger alternative weekly still is a force in local politics journalism and they endorse candidates, from a more "pro-people" perspective.  Generally, The Stranger's endorsements "carry more weight" than the Times, although I would say it isn't that exactly, just that the people who make up The Stranger are more like the electorate than is the case with the ST. ("Trends we noticed on primary election night in Seattle," KUOW/NPR).

2.  The Boston Globe editorialized in favor of some candidates on the basis of their support of increased housing production in the face of typical opposition by existing residents. That's pretty rare ("Housing is on the ballot in Tuesday’s local elections"). From the article:


On Tuesday, voters across Greater Boston go to the polls in local elections. As usual, the election campaigns have covered a whole gamut of local issues, many of them particular to Boston or Somerville, Newton or Cambridge. One of the most heartening region-wide developments, though, is the emergence of unapologetically pro-housing voices. It takes significant bravery to stick up for the greater good in the face of NIMBYism, and candidates who do deserve to be rewarded on Tuesday.

3.  I found this digital ad on the Newsday website interesting, somewhat funny.  In New York State, "Towns" are what in many states are called townships and can be quite large.

The "highways" budget in the Town of Brookhaven is more than $110 million, and in a suburban setting, yep, they don't care much about transit.

The directors of the Bay Area Rapid Transit system are elected, but that transit agency is an outlier as for the most part, large transit agencies have appointed directors. 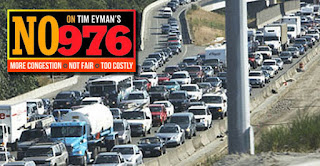 4.   Transportation initiatives range from local to that of statewide significance (e.g., Colorado, Maine).

The State of Washington faces a ballot vote on whether or not to ban add-on taxes on car registrations, which in the state are used to support local transit and transportation programs ("Q&A: What would the proposed car-tab measure, Initiative 976, do?," Seattle Times).

Interestingly, Amazon is funding pro-transit organizing on this initiative ("Amazon and Microsoft are spending big to fight I-976, Tim Eyman’s plan to cut car-tab fees," CrossCut).

5.  When I first wrote about Amazon's campaign contributions in Seattle, I wrote a piece ("Amazon’s growing spending on Seattle politics includes a spate of donations from Jeff Bezos’ ‘S Team’") speculating that this could be foreboding vis a vis Arlington County, a beacon of progressive politics in Virginia.