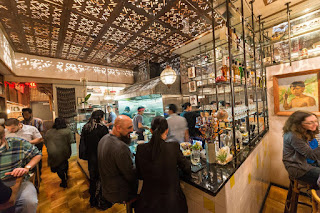 "10 Reasons Why Washington Is A Great Restaurant City"

Back when blogs were ascendant, I got a lot of play for "Richard's Rules for Restaurant-Based Revitalization," which listed a set of "rules" for how restaurants can spur revitalization of neighborhood commercial districts, and by extension cities.

I would get interviewed by journalists here and in other cities, to comment about restaurant and community development issues.

The original piece was partly a response to an article in the Philadelphia Inquirer, which discussed the success of neighborhood restaurants.  At that time, 2005, mostly the kind of chef-driven restaurants discussed in the article had zero chance of success in DC. 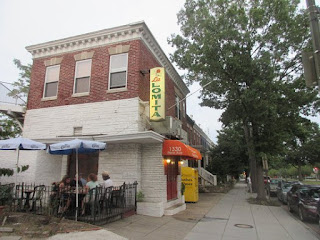 This restaurant, at 1330 Pennsylvania Avenue SE, has been successful for more than 30 years, although it was an outlier in that it isn't part of bigger commercial district.

At best, "neighborhood-focused" restaurants not too expensive, with decent service, and an accessible menu could succeed, at least in DC, but not chef-driven restaurants, which were more likely to be successful Downtown and in Georgetown.

But even then, not that many people were willing to venture to Downtown, fearing crime.

Chef Jose Andres' Jaleo has been a great exception, going strong since it first opened in 1993, and spawning other branches in Maryland and Virginia, and elsewhere such as Disney World and Las Vegas, commensurate with his growing fame.

I countered that restaurants to be successful needed to focus on developing neighborhood residents as frequent customers eating out at their establishment multiple times per week.

"Restaurant tourists":  local eater-tourism as an analogue of architourism.  After the success of the Guggenheim Museum Bilbao, there has been a renewed focus on "architourism" as a way to draw visitors to cities ("The museum that changed a whole city: Guggenheim Museum Bilbao turns 20," Die Welt; "Why can't the "Bilbao Effect" be reproduced? | Bilbao as an example of Transformational Projects Action Planning").

Architourism is a phenomenon that dates back centuries, but it's new to cities thinking in more rigorous ways about how to attract tourists in the face of a multitude of competitive destinations.  (Cultural heritage tourism, which I tout often, is a variant.)

While of course, traditional tourists (people who don't live in your area coming to visit and staying/paying for at least a one night stay) are often a source of business for restaurants, we could say that an element of restaurant patronage is "eater-tourism," comprised of in-region residents going out to eat at places in their home metropolitan area, places that are acclaimed by the national media, from Bon Appetit and Food & Wine Magazines, to reviews in the New York Times or features on television shows such as Diners, Drive-ins and Dives or cooking shows featuring name chefs.

This is comparable to movies and television shows that feature particular areas or topics, like the movie "Sideways" and its effect on wine tourism ("'Sideways': 10 years later, hit film still makes waves in Santa Ynez Valley economy," KPCC-FM/NPR), or Frances Mayes book Under the Tuscan Sun later made into a movie, which still draws visitors to Italy, Peter Mayle's book, A Year in Provence, etc. 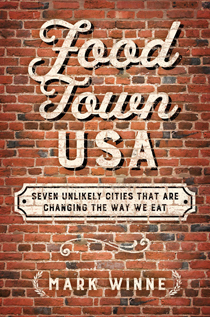 Island Press just released a book I plan to read and review, titled Food Town USA: Seven Unlikely Cities That Are Changing the Way We Eat.

Chef-driven restaurants primarily rely on non-neighborhood residents for patronage.  It's different today, somewhat, but what today's Times article states as a truth, that

has a number of caveats. It's not an absolute.

While some neighborhoods are capable of supporting one or two expensive destination restaurants, recognizing that the customer base for these restaurants is mostly derived from non-residents, the demand isn't unlimited, and some concepts probably work better in restaurant districts that are more central and have a larger customer base with positioning that isn't reliant on an individual restaurant "having to do all the marketing themselves."

(In DC, Metrorail access is a key element of the ability of some neighborhoods to draw patrons from outside the immediate area.)

Overspecialization is still risky.  Last year's "An update to Richard's Rules for Restaurant-Based Revitalization on the failure of wine bar restaurants in DC and Baltimore" discusses restaurant location as being one of five types, and the more local the district, the more risky chef-driven and/or specialized concepts.

This piece discusses this problem in terms of wine bars and the reality that during the week, the average person isn't likely to consume a lot of alcohol, so that wine bars etc. become special occasion destinations, which may not be enough to keep a business open.

What happens when the chef is too ambitious? The CityLab  2019 confab of international mayors just held in DC from Sunday to Tuesday featured a session with Chef Kwame Onwuachi, author of Notes from a Young Black Chef: A Memoir and operator of Kith & Kin on The Wharf, which is one of the restaurants highlighted in the Times article.

While I don't think the talk at CityLab 2019 covered restaurant issues in a manner that could provide insight to mayors, e.g.
it was an interesting presentation and Chef Onwuachi made me interested enough to want to read his book. 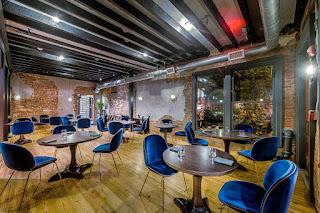 But because I entered the session late, I don't know if they discussed the spectacular failure of his first attempt at a restaurant in the Shaw neighborhood.

Besides setting up unreasonable expectations for what it would achieve, the cost of the meals, etc., Shaw Bijou had a business model that likely was unachievable in a neighborhood setting:

Really high prices and requiring a large amount of customers, likely not from the neighborhood, to fill the seats.

-- "What Happened at the Shaw Bijou?" Eater DC
-- "Chef Kwame Onwuachi Opens Up About the Shaw Bijou and Restaurant Racism in His New Memoir," Washingtonian Magazine
-- "Shaw Bijou, one of D.C.'s most expensive restaurants, has closed after less than three months," Washington Post

A few restaurants in DC manage to pull this off, like Rose's Luxury on 8th Street SE in Capitol Hill. But there isn't enough demand to support a large number of such restaurants across the city. 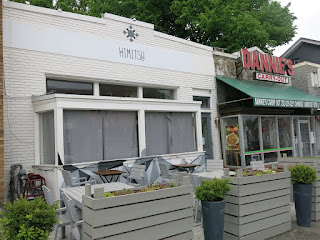 What happens when the name chef moves on from an acclaimed but neighborhood-based restaurant?  Restaurants featured in the Times piece, like Komi in Dupont Circle and Bad Saint on 11th Street in Columbia Heights, still are run by either the original chef-owners or original owners.

But Himitsu, one of the shining lights in Petworth, has changed its name ("D.C. Favorite Himitsu Will Change Its Name When Its New Chef Debuts," Eater DC) and chef because co-founder Kevin Tien not only moved on, he took his recipes with him ("Himitsu’s Founding Chef Is Leaving the National Standout That Helped Petworth Pop," Easter DC).

Will the new restaurant be able to succeed without a name chef?  If so, one element of repositioning might be to shift more towards serving neighborhood restaurants, rather than "food tourists."  But that means big changes to the menu, price points, and business model.

Practioners often aren't good at generating meta-theory.  One thing I've learned through observation is that practitioners tend to not be good at generating "meta-theory", the lessons and learning they need to be able to duplicate and replicate their success elsewhere and in places with different conditions.

Systematizing the "reproduction" of restaurants.  For restaurants this may matter less, because there is a differentiation between the financing side and the food side.

Able financiers ("Who Is Hilda Staples?," Washingtonian), although they sometimes bet on the wrong horse ("From 'Top Chef' stardom to bankruptcy: The rise and fall of Mike Isabella," Washingtonian) and restaurant groups ("Longtime D.C. restaurant group shifts focus to food halls as it expands beyond region," Washington Business Journal) develop the expertise to replicate success with different concepts and chefs.

I remember meeting the owner of Thai X-ing many, many years ago. Back then he's was a carry out where he took forever and a half to make something. For.

Ever.
But it was good stuff. And then his basement cluttered-I'm-amazed-the-inspector-hasn't-shut-this-place-down little enterprise took off, and moved upstairs and then he got a second location. Word of mouth helped. Having an amazing product (then, now it is too damned spicy) worthy of telling friends helped too.
Then his sister got into the act with Beau Thai, which now has two locations. Yes, she has white business partners, but the success came from serving the immediate neighborhood.
Mr. Shaw Bijou, was too new and too expensive. He was charging more than Jose Andres minibar prices. There have been successful black restaurants, Halfsmoke being one of those places. Fishscale, another. Then you got places like Ben's Chili Bowl, the Florida Avenue Grill and other old Washington Black own restaurants.

... every time I go past Half Smoke it seems pretty empty.

I think Hitching Post was black-owned for a long time, but it isn't now.

Then there was Gillian Clark and Timothy Dean. In both cases, I think they charged too much and didn't provide enough value, and had locations that were enough off the beaten track to be problematic.

In one of my earlier RR pieces, I discussed Brightwood Bistro. We talked to the chef-owner and he pushed his neighborhood bona fides, etc. But the restaurant was in a bad location--not easy to walk to, far from dense neighborhoods, difficult for people to park.

This reminds me of Commerz in the Hood writings...

In any case, I wish there were more ways for people of the city to benefit from its positive economic changes.