The original "Richard's Rules" post dates to 2005, and was a response to an article about "destination restaurants" as key to neighborhood revitalization in Philadelphia.  I countered that restaurants to be successful needed to focus on developing neighborhood residents as frequent customers eating out at their establishment multiple times per week.

Last year's piece "Destination restaurants as a call for revisiting "Richard's Rules for Restaurant-Based Revitalization"," updated this discussion some in line with the city pushing 700,000 residents making it possible to support the outward spread of restaurant creativity beyond regionally-serving restaurant clusters like Downtown and Georgetown. 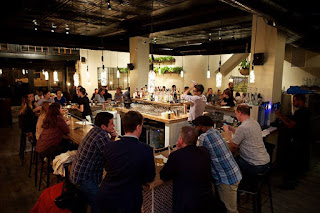 There are at least five primary categories of urban restaurant districts:

(1) regional and touristy-serving, like Downtown and Georgetown, but also Alexandria and now The Wharf district in SW DC, probably the Ballpark District/Navy Yard

The "Rules" call for food and by extension, drinking, concepts that aren't super specialized, a more common denominator, like "Mexican" food, not Indian, with the suggestion that Thai food is now a more universal cuisine, etc.

Granted places like Bad Saint (Filipino) in Columbia Heights, Himitsu (Japanese) in Petworth, Rose's Luxury in Capitol Hill are super specialized and/or expensive and they do fine in "neighborhood" locations.

But maybe there is a limit to how much specialization can work in neighborhood restaurant districts.

Are "neighborhood" wine bars too specialized for today's food and beverage preferences?  I wonder about "wine bars."  I'm thinking that these business failures mean that at a minimum wine bars as a sub-category of restaurants need to be more carefully located, probably in "metropolitan-serving" districts that have much larger customer bases and are more convenient to get to than neighborhoods that may be more out of the way and harder to reach by transit

Both establishments were reasonably well-regarded.  Wine Market Bistro had been in business for almost 14 years, but Ruta del Vino only 2 years.  Both found that the customer base for "heavy" wine consumption was declining.

I can't speak of Wine Market Bistro because I never went there but I did go to Ruta del Vino.

First, Suzanne's the wine drinker not me, I prefer craft beer (and porters at that).  But second, the food while good was overpriced vis a vis the quality and the value (the ceviche was great, the parillada needed more meat, but was cool as a dish served for two).

Third, others complained that the service wasn't that great, although in comments, the owner "complained" that it was difficult to find good help, but also that business was spotty.

Inside the space was a knock out, although outside there were issues (the way a garbage dumpster for an adjoining building is out front, a bus shelter right next to the patio, unkempt treeboxes, etc.).  They didn't invest much in maintaining the public space outside the restaurant.

But to go there a lot you have to want to drink a lot of wine.  Most people aren't doing that when they go out to eat.  A special occasion restaurant needs to draw on a larger "retail trade area" beyond that of a neighborhood to keep seats filled.

And they have to be able to execute the quality-value-price-service equation.

Wine bars/in-city wineries as destinations/experiences.  Note that District Winery in the Navy Yard and City Winery in Ivy City ("City Winery Is Opening in Ivy City DC for Music and Wine Fans Alike," Washingtonian Magazine) are destinations, hold events, and are owned by well-funded restaurant groups with multiple interests.

These establishments operate on a much different scale than Ruta del Vino or Ludlow Market and they are located in "metropolitan" serving districts.

I think Ruta del Vino, had it been able to execute, would have done much better on 14th Street NW in Logan Circle/P Street, or Wine Market Bistro/Ludlow Market on Charles Street or in Federal Hill, or possibly in the private Belvedere Square Market, which functions like a public market. 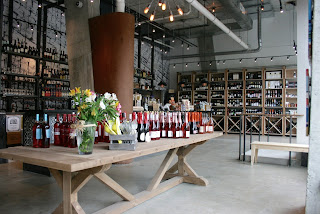 Selling bottles for off-premise consumption + food and drink on-premise as a way to make the restaurant work?  Possibly, Ruta del Vino could have been more successful had it been paired with a sales shop, like Grand Cata on 7th Street NW in Shaw, but that didn't work for Ludlow Market.

On the other hand, a Ruta del Vino type restaurant next to Grand Cata, if well executed, would probably do just fine.

So how much of this comes down to operators?  Although again, with Ludlow Market, that was a concept run by a highly experienced operator and it had worked for a long time, until it didn't.

Cideries.  Another drink concept that seems to me to be over-expanding a bit is cider ("Two Consultants Quit Their Jobs to Open a Cidery in DC Later This Fall," Washingtonian). 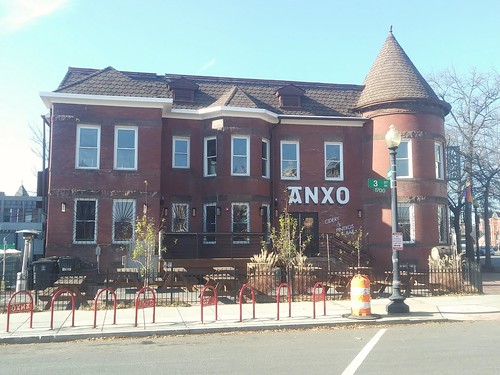 DC has Anxo, on Florida Avenue NW (left) and with an outpost on Kennedy Street NW, and the new Capitol Cider House on Georgia Avenue in Petworth.

These are destinations.  I think over the long term, firms need to carefully consider where they locate their concepts.

Locations in neighborhood-serving districts, like Ruta del Vino, Ludlow Market, and Anxo on Kennedy Street NW may have more difficulty being sustainable.

... people are likely to be less inclined to drink cider than wine.