NPR has a story about Noah Nasiali-Kadima, who won a $1 million prize from Facebook for his creation of online networks to support farmers and capacity building and technical assistance ("Facebook For Farmers: How 75,000 Rotting Cabbages"). From the article:


... he started a Facebook group so that he and other farmers — including new ones like himself, and experienced farm veterans — could discuss and come up with solutions to problems just like this.

The Africa Farmers Group now has 138,000 online members in Kenya and throughout Africa. He has also organized in-person educational seminars in countries across the continent including South Africa, Nigeria, Somalia and Zambia. The goal is to help farmers learn the skills they need to succeed, by providing forums in which they can share their own stories of success and failure, and offer their peers empathy, encouragement and practical tips. In recognition of his work, in September 2018, Facebook awarded him $1 million as part of its Facebook Community Leadership Program.

That's what the US Agriculture Extension system has been doing for more than 100 years in the US.

It was a four phase process.  First, the US created a system of federal support for state agriculture colleges.  Second, it extended this support to what are now called HBCUs, or Historically Black Colleges and Universities.  Third, it created "Agriculture Experiment Stations" as part of the US Department of Agriculture, but with tight connections to the "land grant colleges."  Then it created the agriculture extension program, jointly managed by state colleges and the USDA, creating a system of "extension agents" to provide technical assistance and capacity building, county by county, across the United States.

-- The History and Philosophy of Extension , University of Missouri.

The US Agency for International Development supports agriculture improvement overseas as well.

But if the experience of the best examples of knowledge capture and dissemination* in the world--the US Agriculture Extension system--isn't being exported as a key element of foreign aid and assistance, than something is really wrong with international foreign aid programs. 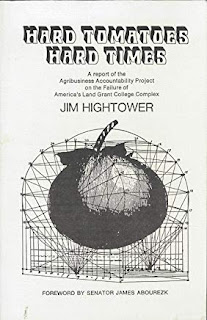 ====
* One criticism of the system of agricultural research in the US is that it is oriented to the support of corporate and large scale agriculture, and technology over workers.

That was the focus of the Agribusiness Accountability Project, which produced two books, one specifically on the land grant college research system, Hard Tomatoes, Hard Times: The Failure of the Land Grant College Complex -- hard tomatoes are easy to harvest, but flavorless...

=====
I argue that one of the foundational strands of the field of community development comes out of agricultural extension.  Even though these efforts have been focused on "rural development," the findings have almost universal application.

I haven't subscribed yet, waiting on my first paycheck. I saw that. One of the weird things that's coming out of that is that they will stop making candidate endorsements.

Not having access to the FT is a big deal, although I can access it via online library stuff.

Anyway, thank you for the link.

FT is not worth it. Unless you are very interested in global capital moving about...but otherwise a pretty limited paper.

That said, you can read the articles -- they have a system of "Gifting" which is the links I post you.

Quite a bit of serious policy discussion on twitter (ugh) on central banks using green bonds. Next step social impact.

Hmm. They talk about the moral issue. But I think it's more about the money. Most local governments lack the monetary resources to really do that. Plus, as you say they don't want to be stuck with such operating costs in perpetuity.

and the way funding streams are laid out, it doesn't really work, although that's where SIBs could make a difference. But why should we pay Morgan Stanley for the privilege of saving money.

But yes, a lot of the motivation by cities for doing "housing first" was the recognition that homeless "frequent consumers of emergency care" were costing hundreds of thousands of dollars/year each in cost.

When I was in SoCal, there was media coverage on how a local study found that 80% (much higher than reported) of homeless have substance or mental health issues.

I just saw a letter, can't remember where, probably NYT, suggesting that the reason 40% of the homeless aren't willing to be housed is because "they don't trust the authorities." That to me is more about mental health impact on decision making.

Basically our system for caring for the poor, people with health, addiction, disability, and mental issues, is pretty f*ed. Cities get screwed by having to deal with this without decent support from the federal government.

and yes, it's complicated by the progressive response in some circles about "letting people make their own decisions." OTOH, I don't think it's fair that this imposes serious nuisances on others. I don't think one person's freedom should be at the expense of others in this way.

We support all types of HP printer troubleshooting and service. Just enter the model number of your printer in 123.hp.com/setup to identify the software and drivers your printer requires. Download and install it in your mac and 'Run' the file. The process is easy however if you have any doubts or queries regarding HP printers contact us.