Integrating multiple amenities into public projects: cherry trees along the path at the University of Toronto Scarborough paths/trails

In testimony I provided in 2002 about city community development policies, I made the point that "every dollar we spend needs to accomplish multiple objectives, because we have limited funds and the city has tough competition that isn't standing still."

That testimony was about the use of urban revitalization funds, and I advocated for them to be concerned about the quality of design, not just the construction of "any old thing."  E.g., instead of "power washing formstone" on one facade improvement project on H Street NE, I said "why didn't you remove the formstone?"

Co-location.  One way to do this is through co-location of public-serving facilities.  I have a long piece about various examples, focused on libraries but with some other examples, "Update: Neighborhood libraries as nodes in a neighborhood and city-wide network of cultural assets."  And now I would argue this is a form of what I call "Transformational Projects Action Planning."

In the DC area, Arlington County, Virginia is the leader on co-location.  Examples include a library in Shirlington with a theater company and where the Thomas Jefferson Middle School is also a community center with a theater and resident theater company, indoor track-exposition building, art studios, and fitness equipment.

Baltimore County, Maryland has some examples too, including how the library in Pikesville is colocated with a senior center ("In same building, senior center, library enjoy large and loyal following in Pikesville," Baltimore Sun).

In West Hollywood, California the city alongside the County library system jointly constructed a civic center with a variety of co-located facilities including a 32,000 s.f. library branch, coffee shop, bookstore, a children's theater, and the city's Council Chambers ("West Hollywood Library's new edition," Los Angeles Times), along with a 400 space parking garage and an expansion of the abutting city park.

In a brilliant design move, The back of the West Hollywood City Hall and Library connects to a public park and instead of a green roof, there is a public pool and tennis courts ("Rios Clementi Hale and LPA Win West Hollywood Park Commission," Architect's Newspaper). 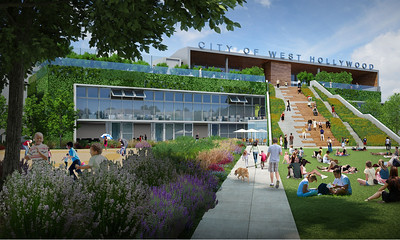 Trails as more than a path from A to B.  When I started a short term bike and pedestrian planning job years ago in Baltimore County, I happened to ride along the Northwest Branch Trail in Prince George's County, on the way home from a volunteer gig.

In the short stretch of the trail between Rhode Island Avenue and Queens Chapel Road you pass the following connected facilities: a skatepark (before it was a basketball court); connection to a nearby park; baseball field; tennis courts; and a playground.  And at Queens Chapel Road you are proximate to various shopping options, including three grocery stores, plus a further connection to the West Hyattsville Metrorail Station.

It really made me see how shared use paths can be so much more than a path between points.  They are about accessibility as well as an opportunity for integrating and extending urban design and the civic asset network and placemaking. 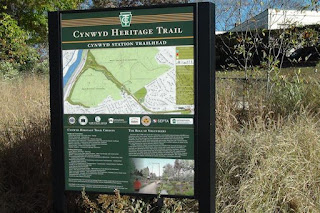 During my Baltimore County period, I learned about a planning effort in Lower Merion Township, Pennsylvania, across the Schuylkill River, from the Manayunk neighborhood of Philadelphia, which aimed to create a shared use path with similar kinds of connections. The path, now called the Cynwyd Heritage Trail, opened in 2011.


The Cynwyd Heritage Trail connects the Southeastern Pennsylvania Transportation Authority’s (SEPTA’s) Cynwyd Station to Bala Cynwyd Park, the historic West Laurel Hill Cemetery, and Westminster Cemetery, as well as a pedestrian bridge across the Schuylkill River. Though only 1.8 miles long, the trail is part of the Circuit Trails, a developing 800-mile urban network of trails in Greater Philadelphia, of which about 350 miles are currently complete. ...

Interpretive signs tell about the cemeteries, former train stations (Cynwyd and Barmouth), and an old cotton mill along the route. A gravel footpath parallels the asphalt trail at various points, where you will find benches and Adirondack chairs overlooking the river. Starting at SEPTA’s Cynwyd station, you’ll find a small coffee shop and restrooms. 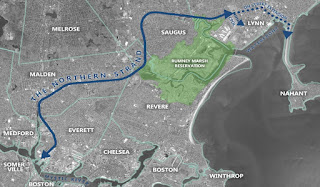 In Everett, Massachusetts, an extension to the Northern Strand Community Trail will be multifaceted according to a recent article in the Boston Globe:


The work includes extending the trail to Lynn and finishing parts that are currently unpaved, while adding benches, landscaping, community gardens, a bocce court, and play equipment along the route, said Kurt Gaertner, assistant secretary for environmental policy in the Executive Office of Energy and Environmental Affairs.

Incorporating edible landscapes into trails.  And then the Toronto Star has reported on a project at the University of Toronto Scarborough campus ("Yes, you can eat the cherries along U of T Scarborough’s new public trail"), where a trail connection constructed on the campus to link to nearby city/regional trail system has been planted with edibles (I am familiar with similar initiatives in Berkeley, California and Salt Lake City, although with vegetables), which will be free to pick.  From the article:


This past fall, the University of Toronto Scarborough (UTSC) unveiled a 500-metre-long accessible trail that connects the university to the nearby city-maintained trails in the Highland Creek valley. Along the main part of the trail, hundreds of shrubs and perennial edible garden plants have been added, as well as a dozen black cherry and black walnut trees.

All of which, once they’re ready for harvest, will be available for picking at the edge of the pathway for anyone walking by.

Daniel Bender, director of the culinary research centre at the University of Toronto Scarborough (UTSC), hopes the new edible plant-filled trail will be the beginning of a big change in how campuses and cities see their relationship to parks and ravines in the 21st century.

(There is a blackberry patch still extant I think on the west side of the Metropolitan Branch Trail just south of the New York Avenue bridge underpass, although it's destined to be demolished in favor of development.)

For awhile I've been thinking about how food plantings ought to be incorporated into the public space. Many years ago (I can't find the photograph) back when Sheila Dixon was Mayor of Baltimore, I remember seeing rosemary and other herbs planted around City Hall. 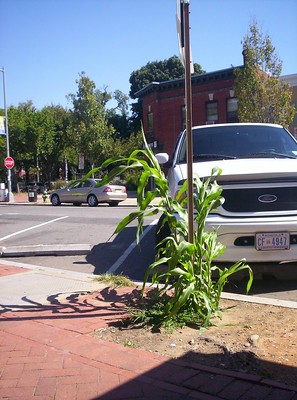 And there was a rogue corn plant growing in a treebox at Eastern Market.

On 4th Street SE, one resident plants tomatoes and basil in his treebox.

And in various parts of the city, DDOT has planted serviceberry bushes, which have a brief period of ripe fruit at the end of May/beginning of June, which is great for pie. 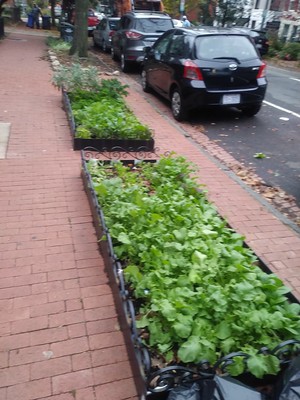 More about what I've been thinking about this in terms of a broader community in a subsequent post using the concepts of the Food Forest ("For D.C. students, lessons in growth, of the garden variety," Washington Post) and the Tomato Independence Project in Boise/Treasure Valley, Idaho. 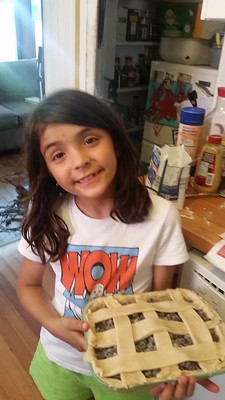 Making serviceberry pie (although we use a recipe for Saskatoon Berry Pie.)