A day of the highest highs, ends with the lowest of lows

For some time, I've been singing to myself the refrain from the David Bowie song "Cat People," -- "Putting out the fire .... with gasoline! -- given Trump's actions in questioning the election, which he lost, aiming to get states to change their results in his favor, and stoking unfounded dissent and disbelief about the election among his followers.

While Trump is the chief arsonist, providing the gasoline but not the literal match, he has plenty of co-conspirators.

In late October, the Guardian published an article, "Republicans closely resemble autocratic parties in Hungary and Turkey – study," about the results of a study by the Vdem Institute, which found that the US Republican Party is as authoritarian as the worst radical right parties in Europe.

It took about three weeks for the Washington Post to get around to mentioning the study ("GOP leaders’ embrace of Trump’s refusal to concede fits pattern of rising authoritarianism, data shows").

And here we are. Trump calls on people to demonstrate in Washington on January 6th, the day that Congress certifies the election ("‘Be There. Will Be Wild!’: Trump All but Circled the Dates," New York Times).

He holds a rally, calls on demonstrators to march to the Capitol -- after Ammon Bundy, after armed protestors invading the Michigan State Capitol, after insurrectionists planned to take prisoner Michigan Governor Gretchen Whitmer and try her for treason, fomented by Trump's calls to "Liberate Michigan."

And after more than 100 members of the House of Representatives and 13 Senators announce that they will challenge the Electoral College results from many states. 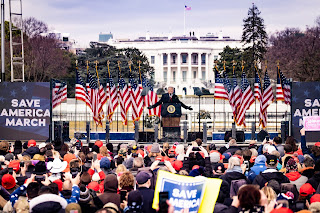 Georgia Senate Win.  Waking up Wednesday morning, learning that Raphael Warnock had already defeated Kelly Loeffler and with strong likelihood that Jon Ossoff was going to defeat David Perdue in Tuesday's Georgia Senate runoff races, for one of the first times since the November election, was I not depressed. 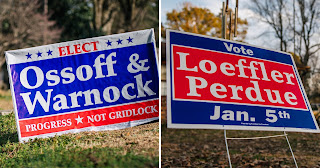 Sure, Biden won the Presidential election, but across the board--in the House, Senate, and State races, Republicans more than held their own. And the fact that most state legislatures stayed Republican ensures that post-Census redistricting will be shaped by gerrymandering favoring Republicans.

The only saving grace from the election besides Trump's defeat, was the opportunity to still take the Senate, because of runoff elections, because no candidate in either race won 50% of the vote.

What threw the Georgia races into runoffs was a Libertarian candidate in the Perdue-Ossoff race, and the open election in the other, a special election, resulting in twenty candidates, making it all but impossible for any single candidate to get 50% of the vote.

And having two races on the ballot increased the likelihood of Democratic turnout, when traditionally, turnout falls off in runoff elections.

Around the time that Congress started certifying the election and during Trump's rally, the election for the other seat was called for Jon Ossoff.

A Senate majority for the Democrats means that a Republican Senate can not fully stymie a Democratic agenda.  Although it would be even better if a couple Republicans would cross the line and caucus with Democrats, because the Republicans are so anti-government. 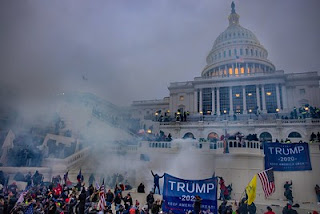 US Capitol enveloped in tear gas in response to Trump anti-election riot, 1/6/2021
Photo: Evelyn Hockstein for the Washington Post

Violent election overthrow demonstrations in Washington, DC.  But at the end of yesterday, I can only believe that the US has ceded all moral authority when it comes to judging or cajoling other nations and their politics. 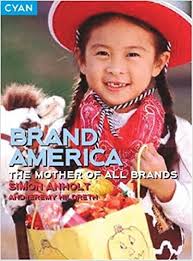 So much for Brand America ("Re-branding America," Boston Globe, 2005).

How can the US condemn Chinese imprisoning of demonstrators in Honk Kong ("China compares U.S. Capitol riots with Hong Kong protests," CNBC) or the eradication campaign against Uygur Muslims (("China Undercover" documentary, PBS Frontline) when the President foments his own group of Brown Shirts to perform Nazi type acts comparable to Kristillnacht and the Reichstag fire ("The True Story of the Reichstag Fire and the Nazi Rise to Power," Smithsonian Magazine) at the US Capitol.

What Trump fomented was no different than the anti-government protests and violent overthrowing of governments that the US criticizes (or creates, e.g., Iran, Chile, etc.)

The very first week of my first year at college, in a class we had to go see the documentary "Battle of Chile," which covered the fall of the Socialist government in Chile, which had happened 5 years before.  It's violent and brutal.  I had no idea that my country could be so brutal in supporting the overthrow of a duly elected government and being just fine with outright killing of citizens of Chile (but also the US and other countries). 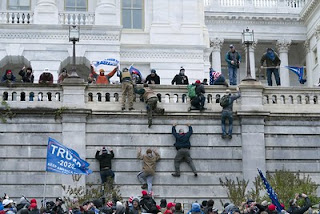 Supporters of President Donald Trump climb the west wall of the the U.S. Capitol on Wednesday, Jan. 6, 2021, in Washington. (AP Photo/Jose Luis Magana)

There should be a reckoning.  Of course, given the Republicans authoritarian turn and all the amping up by Trump the last two months, abetted by elected officials and other stakeholders, yesterday shouldn't be a surprise.

Most of the Senators who intended to challenge, state by state, Electoral College results, were chastened by the attempt at insurrection and backed off.  But few of the Republican Representatives from the House backed off, but without a Senator to support their challenge, their challenges went nowhere.

There is talk of removing Trump from office, using the 25th Amendment although the likelihood of the Cabinet stepping up is minimal, even if VP Pence was himself under attack yesterday.

Police response "inadequate."  Wow, did the US Capitol Police f* up or what?  Many people have pointed out that the response by law enforcement to last summer's BLM protests in DC was much more brutal.  There is video yesterday of Capitol Police letting demonstrators through the fences and taking selfies with protesters.

1.  This protest, including the assault on the Capitol was organized on conservative social media for many days in advance ("Before rioters stormed the US Capitol, Trump supporters called for violence online," CNN).

Don't DC's Metropolitan Police Department and the US Capitol Police (which is controlled by Congress) have "intelligence" capacity?  Shouldn't they have known?  Did these police departments reject intelligence that could have been provided by the Department of Homeland Security and other federal law enforcement agencies. 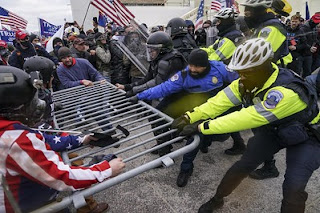 Trump supporters try to break through a police barrier, Wednesday, Jan. 6, 2021, at the Capitol in Washington. As Congress prepares to affirm President-elect Joe Biden's victory, thousands of people have gathered to show their support for President Donald Trump and his claims of election fraud.(AP Photo/John Minchillo)

3.  The Capitol Police totally blew it.  And probably and sadly, there need to be better preventative measures in place other than easily overturned temporary fences less than 4 feet high.  Many many people should lose their jobs over this, including the police officers who consorted with the demonstrators.

According to reports, DC MPD and Capitol Police communicated beforehand and the USCP said they were fine.  I've organized events in DC where we needed to close the street.  You have to go before a massive committee, including representatives from the police, fire, EMS, homeland security and other agencies.  You get grilled.  You have to provide a plan beforehand and then modify it in response.  You can go through many iterations before approval is granted.

4.  DC MPD and related agencies should have planned for the capacity to arrest large numbers of people.  Few people were arrested because "the police departments didn't have the manpower" to arrest them, but instead focused on clearing the Capitol.  WTF?  No repercussions encourages further unrest.

Police sure were prepared during the BLM protests ("D.C. Police Used Tear Gas, Arrested More Than 40 People During Black Lives Matter Protests In Adams Morgan," DCist; "D.C. Protesters Hail The Hero Of Swann St., Who Sheltered Them From Arrest," NPR). 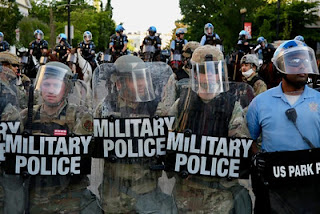 Personally, I think the only reason Elaine Chao, Sec. of Transportation, and Betsy DeVos, Sec. of Education, are resigning is not because they are disgusted by Trump's attempt at insurrection, but because they don't want to have to be on the line and be counted, in an attempt to invoke Amendment 25 to remove Trump from office.

Yes my thoughts exactly on Chao and DeVos. I have William Safire's novel on the 25th amendment and it can be a mess. Anything to avoid that.

WSJ also reports that DHS and FBI didn't do a threat assessment in advance of the Wednesday rally.

Thanks for the Politico cite. It's a damning article. And comparable to many other articles about police failure. (Like Baltimore at Mondawmin Mall, the incident that precipitated ongoing riots in Baltimore after Freddie Gray.)

Except that the USCP is one of the best funded police departments in the US. They had no excuse.

Maybe this is why the DOD was hesitant to authorize the National Guard, although DC Mayor Bowser did ask the Pentagon to restrict involvement of the National Guard because of the summer experience over BLM protests.

The Washington Post: Capitol siege was planned online. Trump supporters now planning the next one..
https://www.washingtonpost.com/technology/2021/01/09/trump-twitter-protests/

The Washington Post: The historical roots of the security failure at the Capitol.
https://www.washingtonpost.com/outlook/2021/01/13/historical-roots-security-failure-capitol/