Walmart: in the city, vs. of the city 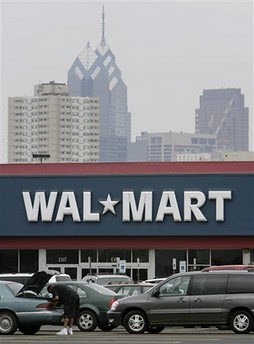 Walmart in Philadelphia, 2006. The store is in the city, but no different in design or operation from any of Walmart's suburban stores. AP photo by Matt Rourke.
I have an op-ed piece in the current issue of the Washington Business Journal, "Temper Walmart glee with planning." The way it works now is that premium content in the journal is fully accessible only to subscribers for four weeks, after which articles are fully accessible.

Wal-Mart Stores Inc.`s entry into D.C. has been hailed by smart-growth proponents who see it as a sign of suburban-oriented retailers reconsidering the value of urban markets. And it`s been opposed by others, including labor interests fearing that unionized employers such as Safeway and Giant are at risk from Wal-Mart`s hypercompetitive business model, which encompasses low prices and nonunion workers.

Existing zoning at the sites chosen by Wal-Mart allows the sites to be developed with minimal opportunity for planning input. What should matter to most of us ~ and what we can influence ~ is getting the physical form, site planning and mobility right, so that these stores contribute positively to the city`s revitalization, available amenities and quality of life. ...

D.C. is still working to get urban form right for big-box retail projects. Only the Best Buy/Container Store development in Tenleytown came with new housing and the Metro -- a triple play.

Developments adjacent to the Rhode Island Metro and in Congress Heights are low-scale retail-only centers with large parking lots not much different from suburban retail centers. The DC USA shopping center in Columbia Heights is different in that it is developed upward not outward, and on top of a Metro station. But it came with a massive parking garage that is only one-third used, and the project isn`t mixed use, lacking housing, entertainment or other uses.

These experiences ought to be lesson enough about how to integrate big-box retail appropriately into large sites and existing commercial districts in D.C. Build upward, include housing and locate and operate stores adjacent to the Metro to reduce automobile trips.

Developers such as Foulger-Pratt, owner of the Georgia Avenue site, should be encouraged to create phased mixed-use development plans, so that sites become more than single-use retail. Underground parking is not enough to maximize the site`s contribution to the city.

The developers should be strongly discouraged from signing agreements giving Wal-Mart exclusive use of the sites, and Wal-Mart should agree to have their stores be part of multistory developments.

The piece also covers transportation demand management and concludes with the point just because Walmart enters the city, with stores that are minimally urban, that only multistory, mixed-use, sustainable transportation oriented stores can Walmart's entry into DC be termed truly urban.