Unlike most of the other DC elected officials, Councilwoman Bowser has stepped up to the plate vis-a-vis Walmart 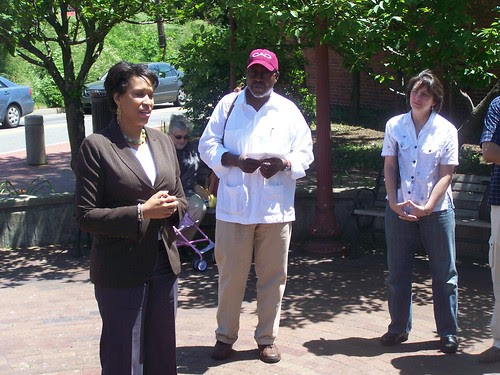 Councilwoman Muriel Bowser speaking at a May 2010 event heralding the completion of the Takoma DC commercial facade improvement project.
I had not been a strong supporter of Councilwoman Bowser, because she was handpicked by former Mayor Fenty to take the seat he relinquished when he became Mayor, Mayor Fenty's supporters poured hundreds of thousands of dollars into the race as a result, and I was hoping for a more progressive candidate, to mix things up on DC City Council, which needs some mixing up.
That being said, Councilwoman Bowser is active and visible at events across Ward 4 and supports the right side of most issues that groups are working on, especially those concerning revitalization efforts, which are the issues I tend to follow most closely, whether or not I am involved with the specific project at hand.
But given how most DC public officials are falling over themselves to suck up to Walmart with regard to their entry into the city (see "How Walmart Won Ward Six," "Tregoning Defends Walmart: “They’re Bringing Groceries”," and "A Tale of Two City Councils" from the Housing Complex blog at the Washington City Paper, and "New DC economic chairman supports Ward 5 Wal-Mart" and the editorial, "Why Wal-Mart should come to retail-challenged parts of D.C.," from the Washington Post), the fact that Councilwoman Bowser produced a press release laying out some preferred guidelines with regard to the company's entry into the city is gutsy.
I just looked at the press release:

- A Walmart plan I can support

and I have to say, considering all the other statements from the Mayor, the other members of City Council, and the Washington Post, it's pretty good.

Her statements support the kinds of points that the enlightened Ward 4 citizens have been making as part of the subcommittee review process I have been participating in, on a committee created by ANC4B to do fact finding with regard to the issue, even when public statements by other public officials--elected and/or appointed--have pointedly ignored the issues we have been raising. (E.g., as discussed in this op-ed, "Temper Walmart Glee with Planning," that I wrote in the Washington Business Journal -- note that since it's been one month since publication, the full article is now visible to non-subscribers.)

• Respect our Comprehensive Plan
My comment-- the Foulger Pratt proposal doesn't satisfy the recommendations of the Comprehensive Land Use Plan and the recommendation to reposition parts of the Georgia Avenue commercial district around walkability and she acknowledges this.
• Invest in D.C. and Ward 4
She states that the company should pay decent wages and use local construction firms and employees to build their buildings.
• Help build a better Brightwood
She states that the project by Foulger Pratt and Walmart should strengthen and support the adjoining commercial district, not diminish it and the need to promote transit and walkability.
• Make sure urban means excellent
The press release calls attention to the failure by Foulger Pratt to include housing in their development proposal.
• Put all the cards on the table
She states that Walmart should deal with the city simultaneously on each project, but collectively, rather than picking off communities within the city one by one.

Maybe it's sad that all Councilwoman Bowser is doing is asking for a reasonable approach to planning and for respecting and responding to community concerns--she's a realist and knows that the company's entry meets the basic requirements of the Zoning Code and can't be opposed, and practically, it's damn hard to oppose Walmart given how much grease they are spreading around the city in terms of charitable contributions and hordes of lobbying.
But I am pleased nonetheless. It's practically the only recognition by any DC elected official (and the appointed officials that serve at the pleasure of the Mayor) that despite the clamor for jobs, more retail, and food deserts, that there are some fundamental defects with the proposal for the Georgia Avenue site/store for one, and that these defects need to be addressed, regardless of the other happy talk.