1.  I wrote almost one year ago ("A lesson to cities that they need to be very careful when leasing assets to public private "partnerships"") about the continuing debacle of Chicago's long term lease of its parking garages and parking meters to a for profit consortium. 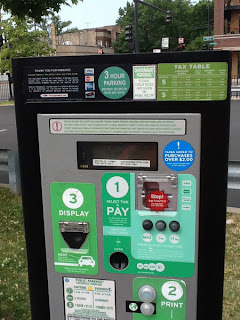 The consortium sued the city because it allowed a competing privately-owned parking garage to open.  I opined that such a provision in the contract was unenforceable--to require zoning to favor one property owner over another in a contract with a municipality strikes me as illegal.

I didn't realize the contract calls for arbitration, not the courts, to settle disputes.  And according to "City of Chicago hit with $57.8 million tab over parking garage snafu" in the Chicago Sun-Times, arbitrators have ruled in favor of the consortium, which will cost the city almost $60 million.

I guess the city can be happy with the judgement, since it's a lot less than the $200 million that the private consortium was seeking.

3.  I think that this is the fallout from the financial desperation faced by most cities and counties.  Falling revenues, big costs from deferred maintenance and rising pension obligations, and limited sources for new revenues.

So they sign multi-year contracts for items like street furniture-advertising contracts or consider leasing monetizable assets such as parking lots and garages.  (Cincinnati is in the process of doing the latter as well.  See "City responds to restraining order on parking plan" from WLWT TV. Indianapolis did a couple years ago, and Sacramento has talked about it as a funding source for a new basketball arena.)

Oh, and doing speed camera and red light camera deals with firms that fund the installation and share the revenue.  See "Red-light camera firms get heat over tickets" from USA Today.

If there were state ("In I-Bank Debate, States Provide Successful Model," New York Times) and national infrastructure banks (The Case for a National Infrastructure Bank | Brookings Institution), operating somewhat like the Bank of North Dakota or the Federal Farm Credit Banking system, where local governments could do fairer financing deals, the kind of debacle that Chicago will be in for the many decades remaining on the long term lease of its parking assets could be avoided.

Of course, Illinois' state finances are so screwed up that their ability to create a state-level infrastructure bank is minimal.

4.  The cover story, "Why Chicago’s Spineless City Council Just Can’t Say No: Nearly two years after Rahm barreled into office, aldermen are still rubber-stamping everything he wants. Here’s why the trend is so troubling for Chicago’s citizens" of the April issue of Chicago Magazine is on the Chicago City Council and discusses why it is so weak, even though Chicago's charter actually lays out a weak mayor-strong council form of government.

The integration of the Democratic Party Machine into City Government through Mayoral Power has built the current system.  Manipulation of the budget and direction of projects to Aldermanic districts where the Mayor has control, selection of committee chairs, and bottling up critical legislation in the committees of loyal Alderman keeps things the way they are.

One of the complaints in the article is that fundamental oversight--such as for the original parking garage and meter leases--is missing and the costs to the citizenry over the lack of accountability is significant.

A good measure of corruption is HOW many levels of local government do you have. Each has their own debt serving and a lot of ways to make money off that. Chicagoland is probably tops.

I suspect a lot of charter schools are running the same racket, because I don't understand where they are getting their money for the renovations.

And as we have globalized, a tax deferent on municipal bonds is not interesting to investors in Saudi Arabia or China. And the size of the bonds/debt isn't large enough either (Podunk School Bond issue A isn't easy to package into a larger security)

I have no doubt the performance parking people would love to have 6.50/H rates in DC. Maybe even higher.

charter schools do get some money from the city for building acquisition and operations, but they also get other monies and yes loans.

2. wrt captive corporations and corruption, I know of a charter school where the principal separately owns a transportation service that I believe is paid by the school to transport students...

3. Yes about loans and securitization--big money seeks out big transactions. Small ones aren't worth it. That's definitely a negative from globalization of finance and the loss of community banks.

E.g., there is a short section in _Death and Life of Great American Cities_ where JJ describes being surprised to come across a commercial district in a community that was thriving, while the rest of the city languished, and discovered that a community bank in the district continued to make loans to city-based clients.

Yes, and maybe it time to look at municipal owned banks for this reason.

(However, it worked out really bad in Spain. Local church saving associations got taken over by local pols and lent to everyone.)

Very good point. It gets back to your first comment. I mean, e.g. when I read about MoCo's desire to run the local electric infrastructure, I know that there are great examples of municipally run utility systems. Then there is Philadelphia Gas Works...