Today the US PIRG Education Fund and the Frontier Group have released a new report, A New Course: How University Programs are Reducing Driving on Campus and Creating New Models for Transportation.

It has a set of recommendations and a bunch of examples of best and better practice at universities across the country.  It's strongest points are that:
Some of the examples that leapt out at me are: 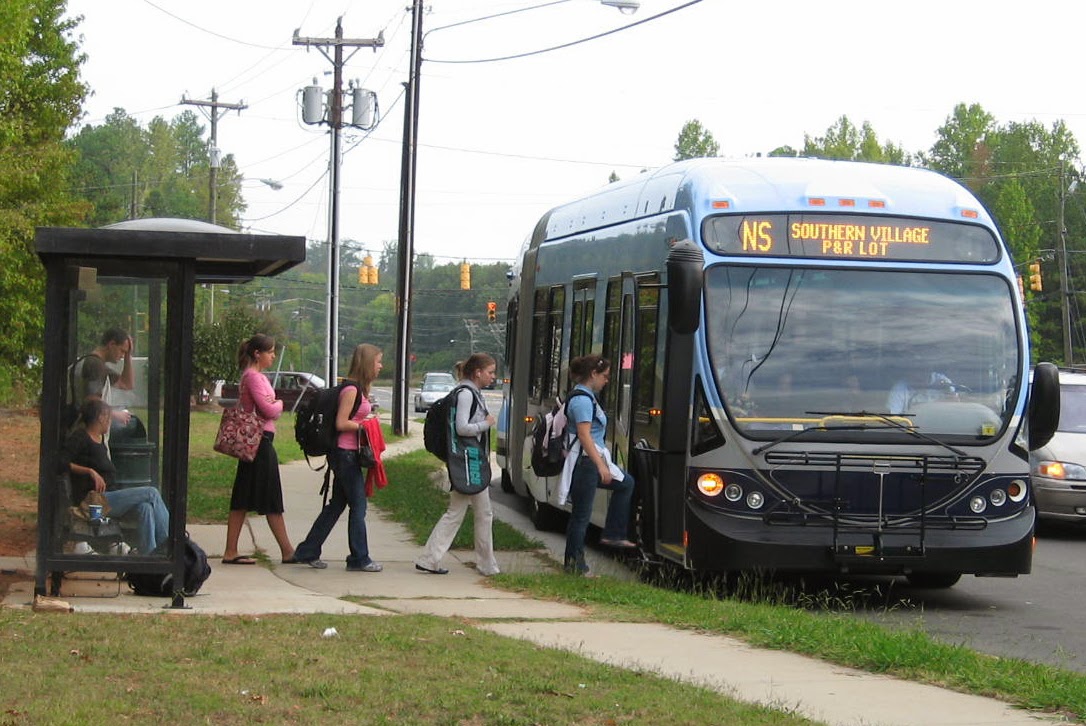 -- many universities and transit systems have free or reduced price transit pass agreements, but the University of North Carolina at Chapel Hill has worked an agreement with Chapel Hill Transit (pictured at left) to provide a free transit system for the town, by providing 38% of the annual budget for the local transit system--the transit agency figured out that most of its revenue was derived from University-related fare payments anyway (UNC-CC Commuter Alternative Program); 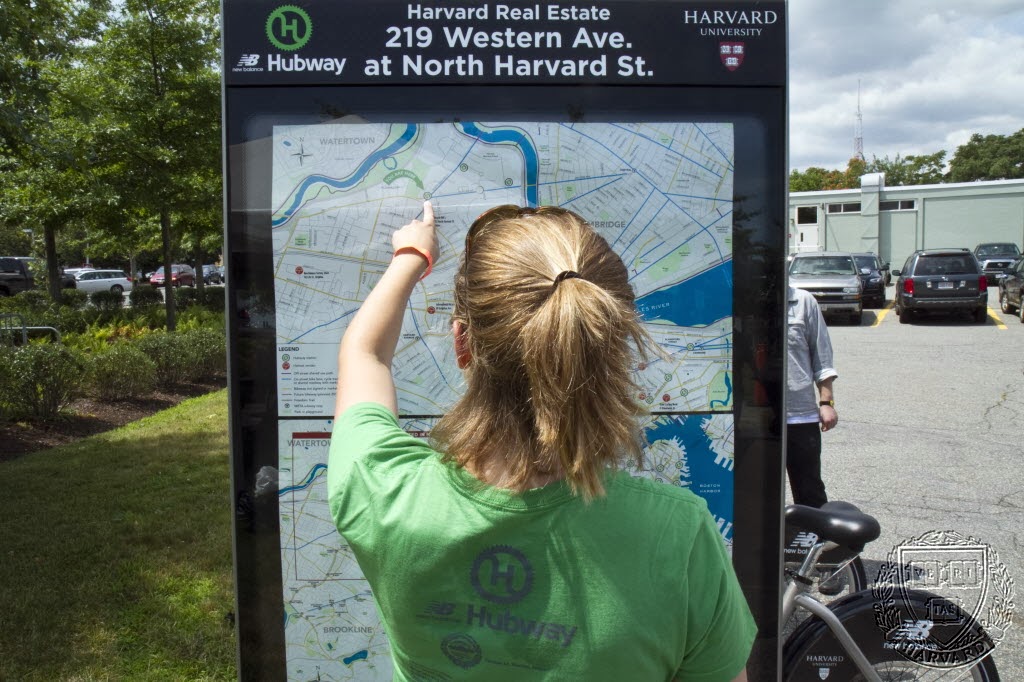 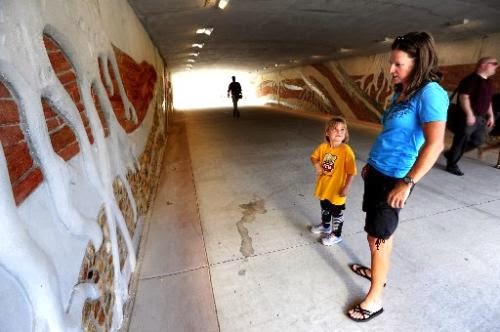 Haley Bonewitz, 6, and her mother, Heather, take a few minutes to look over the artwork in the Broadway/Euclid underpass. Haley, a student at University Hill Elementary, had seen the tunnel construction but had yet to make the trip under Broadway ( PAUL AIKEN, Boulder Daily Camera).  From "Boulder's big project at Broadway, Euclid complete: University, city leaders say safety is vastly improved at busy CU entrance," Boulder Daily Camera.

There is even a "Boulder Bicycle Underpass Choir" because they like the acoustics.

-- University of Colorado Boulder campus has a wide ranging TDM program with special supports provided to walking and biking especially, including financial support for creating cyclist underpasses on major arterials, serving both students and town residents and providing 10,000 bike racks, which is equal to spaces for 1/3 of the student population--60% of daily student trips are made by walking or biking;

-- University of California schools are required to have extensive TDM programs and most are at the forefront of best practice.  But the UC Davis campus brands its TDM program as the "goClub" and provides a wide range of supports and incentives for participation.

Not listed, UC Irvine probably has one of the best images for marketing their sustainable transportation programs (pictured at left).

The report is peppered with many other examples, but of course it is impossible to provide a comprehensive list.  After all, there are more than 3,000 colleges and universities across the country.

A good step forward but there is still need for a more comprehensive report: advocates need more guidance

However, there is still a need for a more comprehensive and detailed report, because there are various developments and issues that advocates and other stakeholders need to know about, when dealing with such issues on their campus or community. 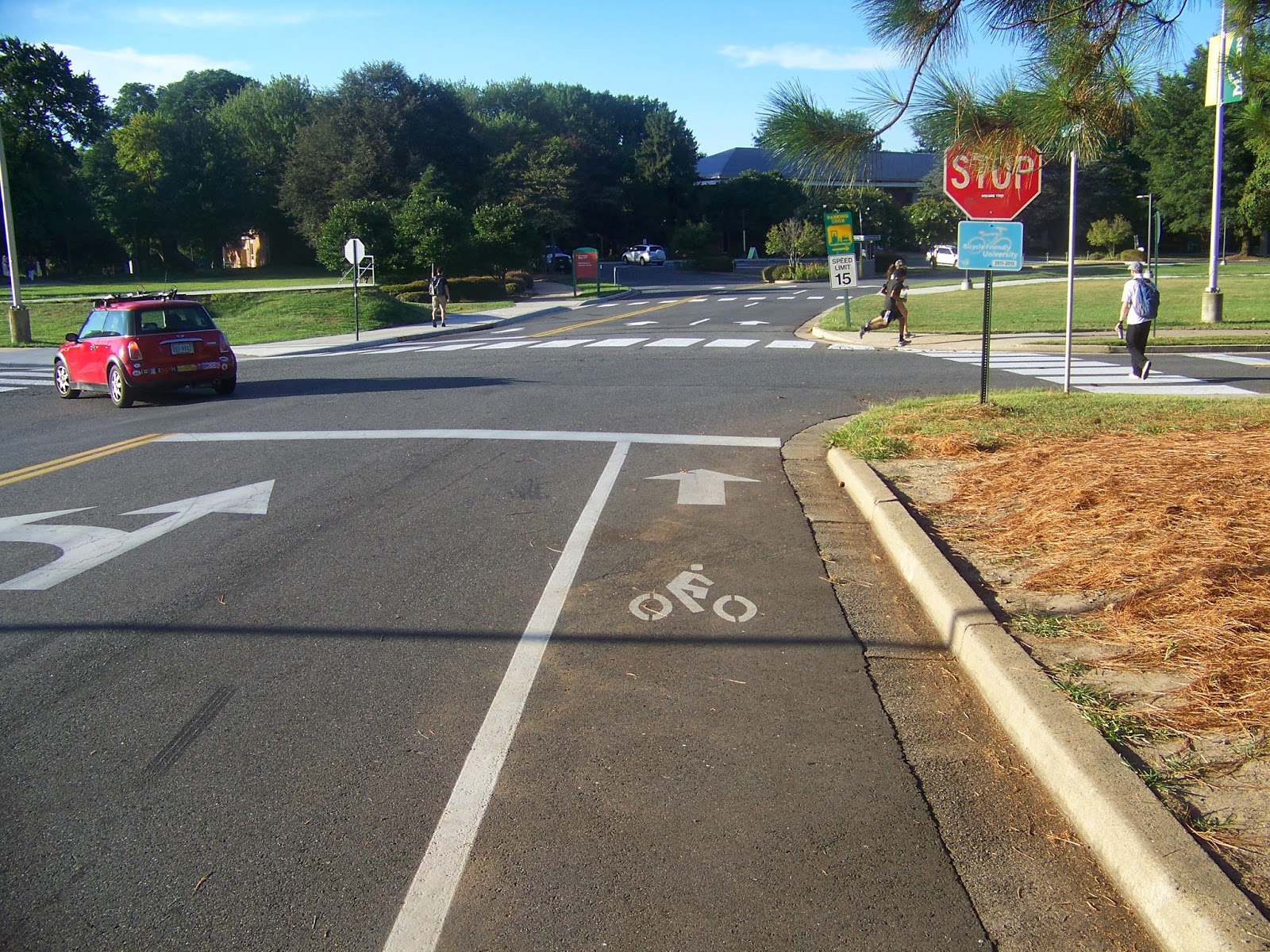 -- The League of American Cyclists Bicycle Friendly University program is a way to encourage college campuses to step up their planning and programming to promote biking.

In the DC region, George Mason University is a designee (sign and on-campus marked bike lane pictured at right).

And more universities are creating bicycle and/or pedestrian plans as part of their transportation planning.  This is an important step because mostly they have been focused on managing parking.

-- Some universities are starting to "sell" their parking systems on a long term lease to private operators, but the money received isn't necessarily being used to support sustainable transportation programming ("Ohio State Gets $483 Million Bid for Parking Lease," New York Times);

-- Most states (or localities) do not require that universities engage in active transportation demand management.  Fortunately, what has been driving change on many campuses is a greater focus on sustainability, which includes a major focus on transportation regardless of planning requirements.

It is important to recommend that appropriate state and local laws be changed to require TDM planning by local colleges and universities (e.g., in Michigan, state universities are treated as a fourth branch of state government and are not subject to local zoning and transportation planning requirements) and to ensure that it is focused on automobile trip reduction and the support of walking, biking, and transit as well as parking.

And people need some good examples of best practice TDM, campus biking, and campus transit plans, to be able to use when dealing with their local institutions.

- Sustrans (UK) brochure, Transforming travel in colleges and universities
- "Physical activity by stealth? The potential health benefits of a workplace transport plan," Public Health, 4/2011; 125:4 (210-216).  This paper investigates the effect of implementing a workplace travel plan at the University of Bristol, finding that unanticipated health benefits arose from an increase in cycling and walking.

-- State budgeting practices can damage state university transit programs.  For example, in Ellensburg, Washington, a few years ago Central Washington University expanded its bus service to serve the town, for free, just like in Chapel Hill.  But last year the service was suspended for a time because of delays in passing a state budget by the State of Washington Legislature ("Central Washington University transit suspends travel services" CWU student newspaper, the Observer; "Central Transit service grows in Ellensburg").  The university pays 25% of the cost, the city about 8%, and 2/3 comes from a state appropriation. 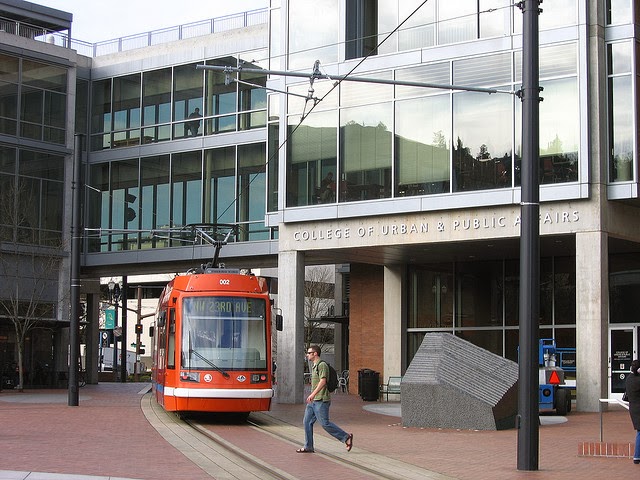 Left:  The Portland Streetcar passes through the plaza in front of Portland State University's College of Urban and Public Affairs.  Image from Rethink College Park.

-- The report did not discuss university participation in fixed rail transit service development and promotion.  For example Portland State University is a strong supporter of the local streetcar service there, paid to sponsor a station stop, and has repositioned the university in part around sustainable transportation as a branding element; the streetcar in Tucson will serve the University of Arizona campus, and also in Portland the Aerial Tram which serves the Oregon Health and Sciences University is operated by OHSU.

While elsewhere other universities may have been obstreperous (e.g., University of Maryland College Park although they have since reversed their position, Norfolk State University, and University of Southern California come to mind).

For example, Norfolk State now criticizes the light rail station for unsafe conditions, when it was their opposition to better locating the station that led to the suboptimal siting conditions of the station ("NSU officials say Tide station poses risk for students," Norfolk Viriginian-Pilot).

By contrast, from the University of Arizona streetcar webpage:


The UA became a partner early in the planning phase of the streetcar and is a major stakeholder. Sun Link will change the way more than 50,000 students, faculty and staff access UA facilities and move about our community. The modern streetcar is a key component of the UA Comprehensive Campus Plan, allowing the landlocked campus to grow and develop, while promoting sustainability. For example, in the fall of 2011, the UA launched UA Downtown in the renovated Roy Place building and is currently holding classes there, with plans to add additional academic offerings at this site in the future. The UA also encouraged two private housing developers to plan and construct downtown student projects that will provide off campus housing for 1,200 students. A significant percentage of the Sun Link project team have graduated from the UA and feel that, when complete, Sun Link will bring tremendous benefits to the campus and surrounding area. 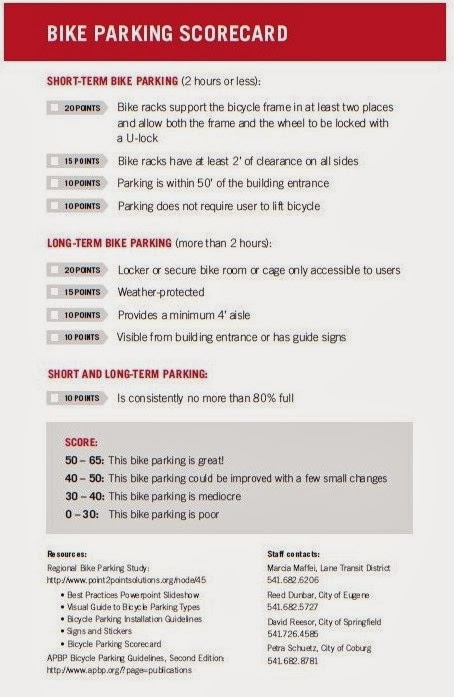 Conclusion:  a master checklist of what to advocate for would be good.  The report is a step forward.  For example, it's great that the report includes an appendix listing colleges and universities with transit pass programs.

But as an example that we need to go farther, it would have also been great to list some best practice examples of transit agency programs.

For example, MTA in Baltimore has a transit pass program available to all college students in its service area, while in the DC metropolitan area, the WMATA transit agency does not offer such a program.

One good source of info is Metro Magazine's University Transit e-letter (current issue).  But I don't know of an equivalent e-letter on walking and biking issues.

Or, in my experience most college campuses don't install best practice bike racks ( Bicycle Parking Guidelines, Association of Pedestrian and Bicycle Professionals; "Not All Racks Are Created Equal," BicyclePaper) and most fail to provide indoor parking at dormitories.  Bike theft is a big problem in college towns.  Etc. 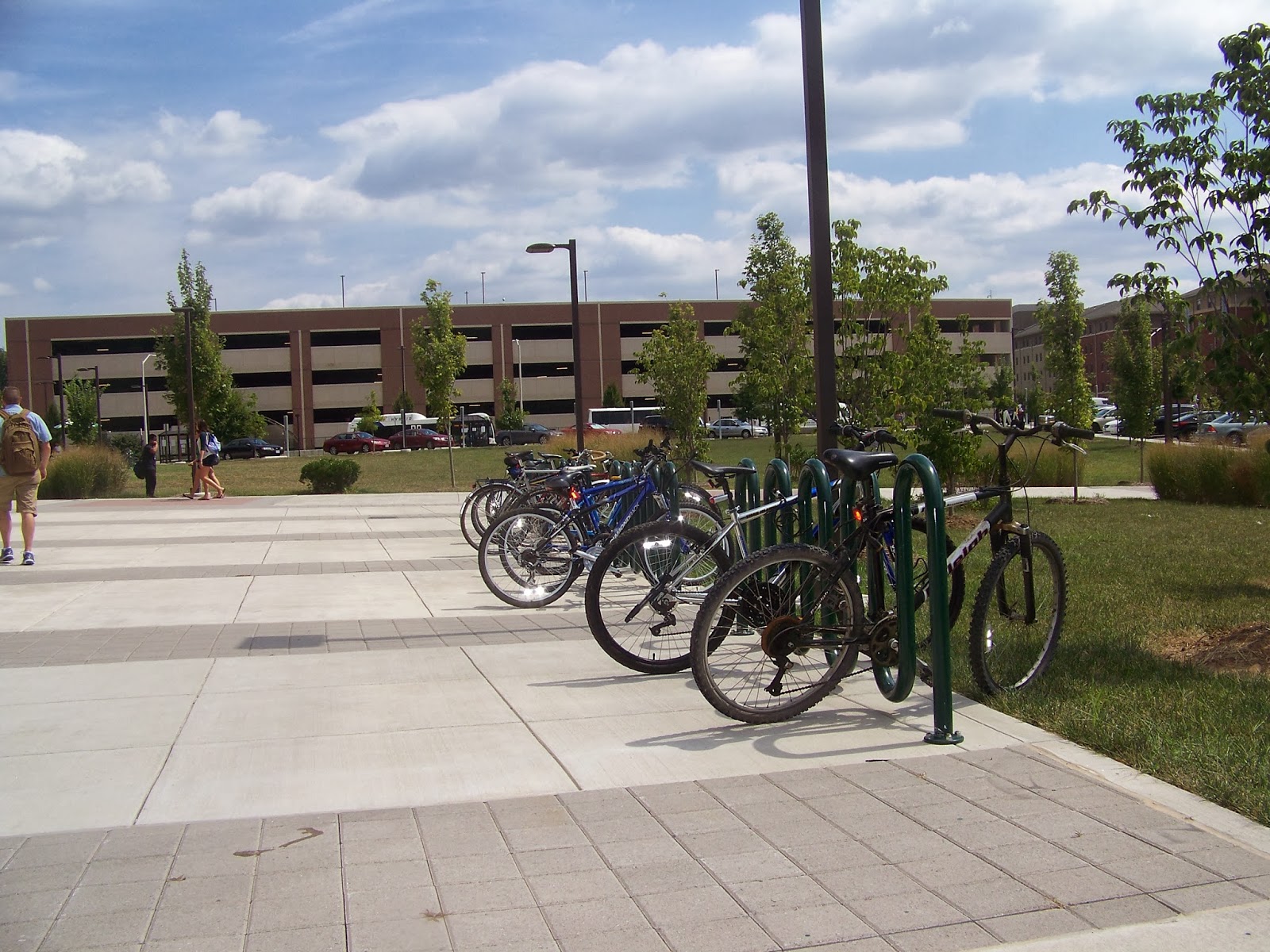 That's why master checklists and a more detailed listing of better practices is in order.  Because even with guidelines to practice widespread and available, many universities are not following this advice.

For example, GMU is ranked as a bike friendly university, but most of their bike parking doesn't satisfy APBP guidelines, as the wave racks pictured at right indicate (APBP recommendations include support for a bicycle at two points on the frame, wave racks only provide support for one point).