Video of the ice track from the Toronto Star, "The Bentway makes magic in a hostile urban space beneath the Gardiner."


The skating path itself is roughly a figure-eight shape surrounding landscaped patches of earth dotted by plants and public art pieces. It sits near the entrance of the Fort York Visitor’s Centre, surrounded like the rest of the eventual park by the “bents” — the inverted-W-shaped concrete pillars — that hold up the highway. The effect is of a cozy space framed by the square geometry of the infrastructure and lined to the south across Fort York Boulevard by condo buildings whose residents will have the park as their new backyard.

For this opening season, the skating rink will feature a lighting installation in late afternoons and evenings that will project skaters’ shadows onto the concrete pillars and use the images to create a video project. During opening weekend, events are planned: an opening party Saturday beginning at 11 a.m. that includes skate dancers, singers, DJs; Mayor John Tory is hosting a skating party Sunday from 1 to 4 p.m. when skate rentals and hot chocolate will be free.

Various under and adjacent freeway park initiatives (and other re-use projects focused on capturing industrial infrastructure for parks and public uses), prove that space under freeways can be used in public space supportive ways, not merely as parking or otherwise seemingly abandoned.

The High Line Network is a banding together of a number of these initiatives.

Yesterday, the Bentway skating track opened in Toronto. It is placed under the otherwise controversial Gardiner Freeway--some city residents want the freeway to be removed but the Mayor bowed to suburban interests and has committed billions to its rehabilitation ("Tory won't reopen Gardiner repair debate despite $1B cost spike," Toronto Star). The Bentway "park" is about 1.75 kilometers between Strachan and Spadina Streets. The skateway track is 220 meters long and has opened in advance of most of the park, which will open in June. 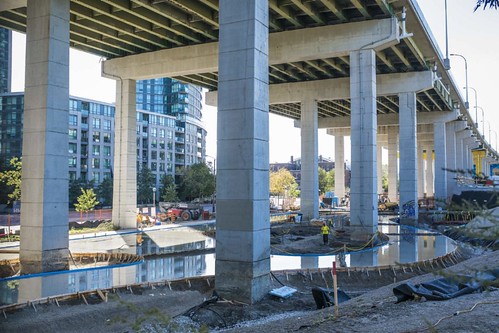 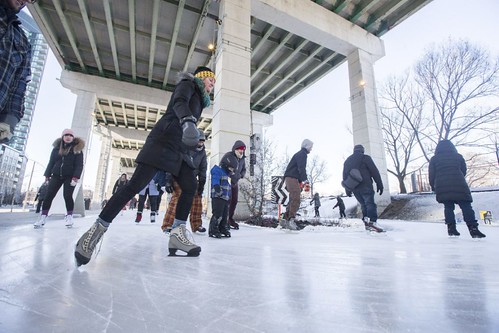 Bentway skating track on opening day, January 6th, 2018. The dead zone from Strachan Ave. to Bathurst St. has been transformed into a looping rink called The Bentway, a reference to the concrete “bents” that carry the weight of the Gardiner overhead. Photo: Bernard Weil, Toronto Star.


The Bentway initiative is not limited to the winter ice track, but a full program of year-round activities and improvements for the space under the freeway, which otherwise would go unused and is a negative condition imposed on the abutting neighborhoods. The project was launched in 2015, with a $25 million (Canadian) donation by Toronto philanthropists Judy and Will Matthews.

See "Philanthropists’ vision reflected in looping skating rink beneath the Gardiner," Toronto Star; "Why the area under a Toronto highway will define the next wave of urban public spaces," Toronto Globe and Mail).

From the TGM article:


... while it's counterintuitive, the Bentway also represents a new generation of public space: a mix of recreation, culture and social spaces that serve the needs of an evolving city while reusing tough scraps of the urban fabric. ...

Can people enjoy spending time under an expressway? Yes: Once you've seen the space that is becoming the Bentway, it's clear that they can. Under the Gardiner Expressway on the west side of downtown Toronto, it's an outdoor area that is somewhat shaded, spacious – the highway is more than 15 metres off the ground – and surprisingly peaceful. It runs alongside the Fort York National Historic Site, cutting through a dense and fast-growing neighbourhood of residential towers. The Bentway is planned to stretch 1.75 kilometres; there are, the designers say, 70,000 people within a 10-minute walk of this zone. ...

The "how" of this project is important. Sleath's employer is the Bentway, a non-profit that has been set up to administer and program the space. While the corridor will be public and open 24/7, it is not technically a park. That structure allows the Matthews' money and influence – Judy Matthews is trained as an urban planner – to help the project move quickly and nimbly. "The entire modus operandi of this city for the last 50 years has been pulling things apart," Public Work's Nicklin says. "We've had to put them back together in six months."

It also allows the project to push the city toward unfamiliar goals, and to create a sort of public life that would have been unimaginable a decade ago.

Canada is known for a plethora of outdoor skating rinks and skating and other winter programming on the Rideau Canal in Ottawa, as a key element of public space and parks planning. 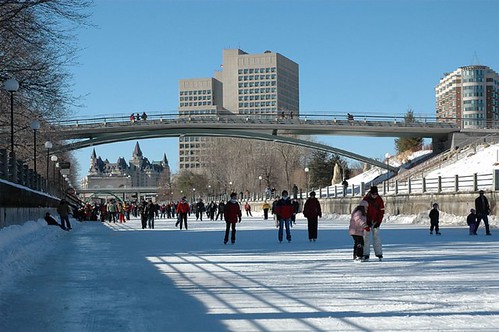 With the current cold it seems as if DC would be ripe for a similar treatment on the C&O Canal, which was discussed in a GGW post by Will Handsfield last year ("Could Georgetown's C&O Canal become a winter skateway") and there is a community design initiative focused on the C&O Canal currently ("A first look at design concepts for the C&O Canal," UrbanTurf).

But generally, the area isn't cold enough consistently over the course of the winter season to be able to do this without a refrigeration assist.

There are various public outdoor ice rinks in the DC area, including in Silver Spring, on the National Mall in the National Gallery Sculpture Garden, in Georgetown at the Washington Harbour, and in the new Wharf development on the DC Waterfront.  Although unlike the Bentway, they are not free to use. 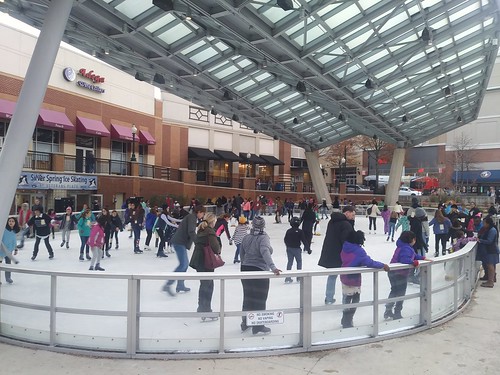 The ice skating rink in Downtown Silver Spring is a key element in the development of a seasonally-focused programming mix. 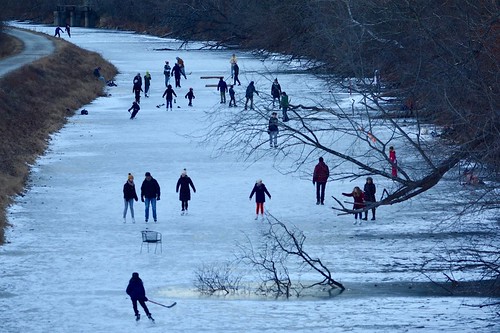 Droves of people young and old carve into the frozen surface of the C&O Canal on Tuesday, Jan. 2, 2018. For many families, ice skating in the national park is a tradition that goes back generations. (WTOP/Dave Dildine)

The space under the WW bridge on the Alexandria side is huge. Trail goes through it, and there are some rec amenities, bb courts, I think. A few people picnic under it in the shade. On hot days it does seem to be a bit cooler under there and I'll linger and take a long break during a bike ride.

I haven't managed to bike over there. I'll have to check it out.