Another example of the need to reconfigure transpo planning and operations at the metropolitan scale: Boston is seizing dockless bike share bikes, which compete with their dock-based system

For going on 10 years, I've been writing about how the DC area doesn't really do metropolitan scale mass transit planning.  I did a presentation about it at the University of Delaware planning school in 2010. 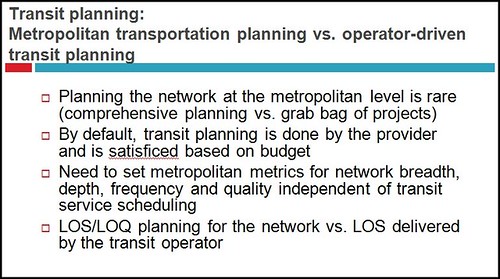 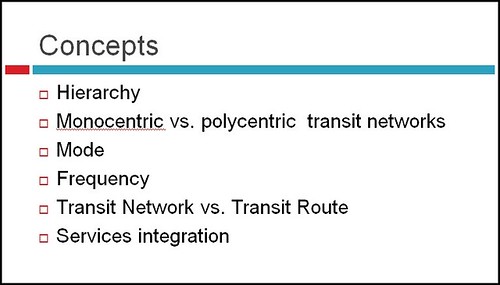 What I advocated for originally was that the area's designated Metropolitan Planning Organization should be tasked to do true cross-jurisdiction transportation planning, and that separately the jurisdictions should contract for transit operation.  (Now though I have broadened this concept from "mass transit" only to a more complete "sustainable mobility platform" that includes walking, various forms of biking, car sharing, delivery, taxi services and microtransit, etc.) 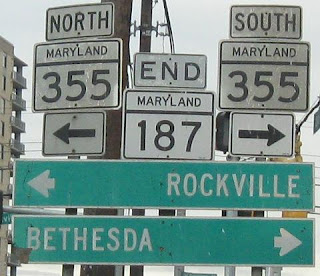 States do a form of this with "state-controlled" roads that serve multiple jurisdictions.

For example in Maryland, for the most part all the major arterials are controlled by the State Highway Administration, even though the counties still do separate transportation planning, which also provides guidance for these roads.

This would make the MPO, not WMATA, the operator of Metrorail and today the default heavy rail transit planner, the planning organization. (Note that this is a problem in other areas, but not others, depending on how strong the MPO is, whether or not the planning area covers multiple states, etc.)

The idea is that the breadth and depth of the network would be defined as a planning condition, with Level of Service (LOS) and Level of Quality (LOQ) metrics set independent of the transit operators, and that the jurisdictions working together would then contract for the services, from either government agency or for profit providers.

Rather than WMATA doing this, and then "satisficing" service on Metrorail and in the case of Metrobus eliminating various bus services because of budget shortfalls, the MPO would "contract" for service.  If the service can't be met because of budget reasons, there is the justification for adding to the budget.

Probably the best model for this is the "transport association" model in Germany, where the jurisdictions combine into one integrated transportation planning and operations group, with common planning, scheduling, coordinated operation, and an integrated fare system.

In the case of Hamburg, a few dozen different operators provide service, and the organization extends its transport planning practice beyond the border of the City-State to include portions of two adjoining states.    Note that this is how it works in London and Paris also (and probably other areas I don't know about). 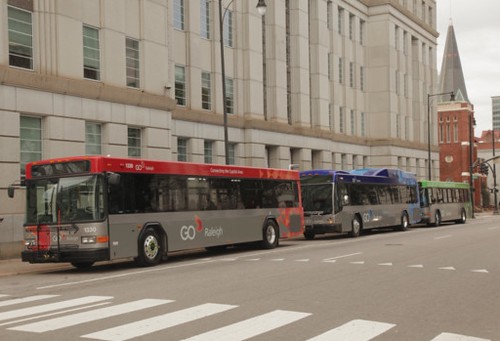 But in 2016, I learned that a similar kind of system exists the Raleigh-Durham area of North Carolina, where there is a lead transit agency, Triangle Transit, comparable to WMATA, but it acts as the big brother/sister, and over the past 15 years it and the other jurisdictions have increased their level of collaboration in terms of scheduling, fare policy and systems, customer service, and design of the buses in a way that functions pretty close to the German model.

2. Moving the MPO model to the next level, by creating Metropolitan Transport Associations, integrating planning and contracting for operation in one organization. Now I would probably argue that the MPO form in the U.S. needs to be revamped and expanded along the lines of the German transport association model, not just for the DC area, but in all major metropolitan areas, depending on how close they are to that model now.

(Greater San Francisco and the Puget Sound region are the closest to this model.  Although in Minneapolis the MPO also runs the transit system.  And many California counties are single county MPOs, some have single county transit systems, like Orange County, others have just a couple transit providers, like San Diego, and others are a polyglot, like Los Angeles County.

NJ and New York City are separate MPOs but they need to integrate as a cross-MPO transport association to better integrate and coordinate transit services.  Etc.)

I wrote about this yesterday, "Integrating payment systems in the Sustainable Mobility Platform," wrt the DC area, and the suggestion that new transit fare collection systems include the various forms of "new sustainable mobility" modes being offered these days including car sharing, and dockless bike sharing and dockless e-scooter sharing.

I am of two minds. I think it should be done, but at least in the intermediate run, many of those firms are likely to go out of business at some point (cf. Hailo, Bridj, various ride hailing competitors, Sliide, etc.) so how much energy should be spent on fare collection integration, especially when most of the new firms don't have the legacy system integration problem, and are mobile-digital native apps. With native apps, the user is probably comfortable "integrating" payment systems on their own--connecting the app to a debit card/bank account.

Note that the Montreal transit agency, unique in North America, has integrated bike sharing and car sharing access into their fare card system. Although LA MTA does have bike share access for their system somewhat integrated into their contactless transit media card also.

But the point that isn't being discussed, despite all the talk about mobility as a service/transportation as a service--which I call the Sustainable Mobility Platform, at least for the sustainable modes that are a subset of the MaaS/TaaS concept, is that in terms of transportation planning at the metropolitan scale, the for profit providers in car sharing, bicycle sharing, scooter sharing, and other modes mostly aren't sitting at the same table with the nonprofit transit agencies and bike sharing groups.

And too much decision making is happening at the jurisdictional level, which can create big holes within what ought to be a platform that works at the metropolitan scale.

Of course that will be hard, because the dockless providers (not the car sharing providers) and to some extent some of the ride hailing operators especially Travis Kalanick ("The Fall of Travis Kalanick Was a Lot Weirder and Darker Than You Thought," Bloomberg) are "anarcho-capitalists" who are libertarian and anti-regulation, making it very difficult to integrate them into metropolitan scale transportation planning. From the Bloomberg article:


Conclusions drawn from the survey were printed and hanging on the walls. About half the respondents had a positive impression of Uber and its convenient ride-hailing app. But if respondents knew anything about Kalanick, an inveterate flouter of both workplace conventions and local transportation laws, they had a decidedly negative view.

As usual with Kalanick, the discussion grew contentious. Jones and his deputies argued that Uber’s riders and drivers viewed the company as made up of a bunch of greedy, self-centered jerks. And as usual, Kalanick retorted that the company had a public-relations problem, not a cultural one.

Dockless bicycle and scooter sharing firms operate similarly, even if they are moving into some cities under various forms of licensing and/or pilot testing.

While many large cities and metropolitan government coordinating organizations espouse sustainability principles, when it comes to transportation policy and practice, most US cities with some exceptions continue to prioritize the motor vehicle. 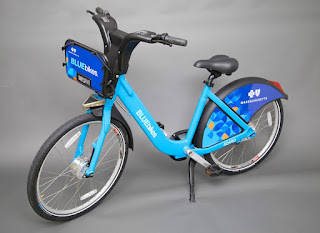 4. Boston. An example of the necessity of figuring out how to integrate for profit providers  is the introduction of dockless bike sharing to the Boston area.

The City of Boston created the Hubway bike system, originally serving Boston, Brookline, Cambridge, and Somerville in 2011 -- now it's called Blue Bikes with Blue Cross as the primary sponsor.

Boston's bike sharing program has been exemplary in at least two dimensions.  They've been pioneers in providing discounted access to low income residents.  And somehow they've gotten universities like Harvard to buy into the program and pay for stations, thereby expanding the reach and value of the program.

This year, various dockless firms have entered the Boston metropolitan market and while LimeBike and Spin have avoided placing bikes in those communities that offer Blue Bikes, Ant Bicycle, a firm local to the region, hasn't, and Boston has been seizing Ant bikes that are deposited in the city ("A bike-share border war has started in Boston," Boston Globe).

First, this raises the general problem that the local government bike sharing programs are seemingly cross-jurisdictional but aren't. There is a common brand, but each jurisdiction joins and operates separately, independent of the MPO. 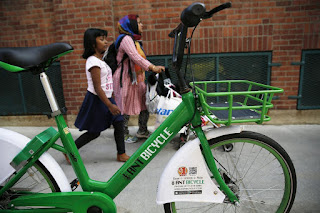 Second, from a MPO/MTA standpoint, planning for bike sharing should be done at the metropolitan scale.

Third, with the anarcho-capitalist introduction of dockless bike sharing and e-scooter sharing, somehow these anti-regulation types need to be bridled and brought to the MPO/MTA table, because transportation modes are supposed to be integrated into a system.

Fourth, the traditional bike sharing programs probably ought not to be allowed to be super anti-competitive like Boston seizing bikes.

Although that being said, there are many problems with the dockless bike sharing business model ("Shared Economy Business: Fixing Its 'Genetic Disorder'," Eurasia Review) and it's not necessarily clear that any of these businesses will be around in the intermediate to long term, without venture capital subsidy--plus they are an expensive way to get around comparatively speaking, and they aren't likely to be used much for regular transportation, therefore obviating the need to support their introduction.

=====
Reorganizing governance at the metropolitan scale.  Note that the problem with MPOs and MTAs is a subset of a bigger problem, that "center cities" have reorganized as metropolitan areas (what Brookings Institution calls the "Metropolitan Revolution (book review)," Peter Muller, "Transportation and Urban Form: Stages in the Spatial Evolution of the American Metropolis") but political and governance structures of these communities, except for those with merged counties and center cities like Indianapolis and a few others, haven't caught up (Toronto, but it has a big center city-suburban divide).  State legislatures and various jurisdictions aren't disposed to be supportive of such mergers.

Note that in cities like Montreal, London, Paris, and Thessaloniki, there is a hybrid form of this.  There is the "center city" as a whole, but it is also broken up into boroughs/arondissements, so that citizens are represented both city and borough governments.