GGW has a piece on the proposal for a Route 7 Bus Rapid Transit service in Northern Virginia ("BRT on Route 7 is getting closer to actually happening"). I've been meaning to write about that service in a different context and will get to it. 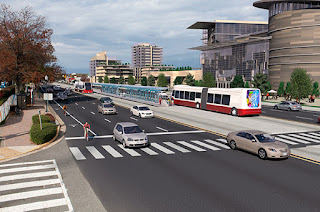 But the comment thread reminded me of and reiterated a point I've made for many years, that the DC area doesn't do metropolitan-scaled transit planning.

The various proposed and extant bus rapid transit services in the area illustrate the point.

WMATA runs a service in Alexandria and Arlington called Metroway, as well as separately branded bus services called Rex on Richmond Highway/Route 1 and PikeRide on Columbia Pike, Montgomery County is planning its own BRT program.  There is a kind of BRT special Route 1 bus service in Prince George's County.  Now there this proposal for Route 7.

(Some people will argue that these other services I mention aren't BRT.  They're right.  But they are limited stop services--"rapider bus"--that could be converted to BRT and are the foundation of an arterial corridors focused BRT system.)

That's potentially six different BRT services, with no coordination or integration between them. Plus it costs more to design different branding, shelter, and design services for each separate service.

I argue that the MPO should be the transportation at the metropolitan and regional scales, defining the preferred breadth and depth of the network, and expectations for level of service and level of quality, and contract with operators to provide that service, separating the planning and operating functions.

The basic points hold although it needs some tweaks in terms of recommending a system of dedicated transitways for surface service (buses), and more about branding, and later points about transit infrastructure as an element of civic architecture.  These entries cover those points:

While "metropolitan planning organizations" are tasked by the federal government to do this, the DC area's MPO doesn't really do so.

In the DC area, the closest to a metropolitan transit planner is WMATA, the operator of Metrorail and Metrobus, but their agenda is very much shaped by their two primary services, and don't seem to be too amenable to other modes and types of transit, and definitely aren't focused on creating an integrated transit system that is transparent to the user.  Not to mention that budgetary considerations shape their service in ways that can be counter to maximal access.

While I tout European examples of integrated transit systems in cities like Hamburg, London, or Paris (there is a recent paper on this topic, Regional Coordination in Public Transportation, [Mid-Atlantic University Transportation Center], although I find it somewhat wanting), the reality is that there are other MPOs in the US that do comparable work, although no US transit system operates at the metropolitan scale in the US in the way that the best practice European systems do.  In Minneapolis the MPO also runs the transit service. 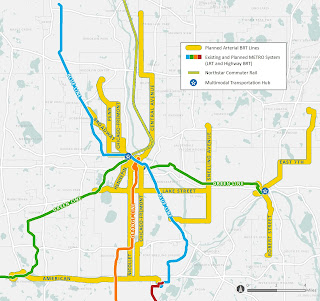 Map of the proposed arterial-focused BRT system in Minneapolis.

For example, all the BRT services in King County are branded as RapidRide.  In York Region they are Viva, etc.

Wouldn't it make sense for the DC area to have an integrated BRT system as an element of the transit network at the scale of the metropolitan, suburban, and center city transit subnetworks?

But that's not what's happening.

Planning that way, bus rapid transit would function as a network at multiple scales.

For example the proposed Montgomery County network becomes the foundational component of that county's bus transit network (at the scale of what I call the suburban transit sub-network), complementing Metrorail and MARC train service in the county, while simultaneously serving as a component of cross-suburban services and an element of the transit network at the metropolitan scale. 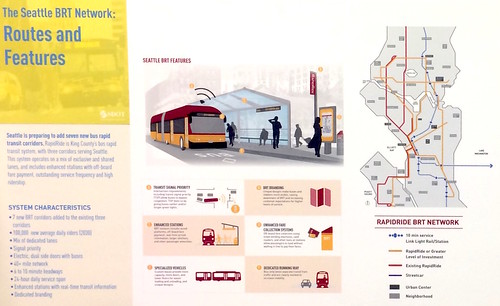 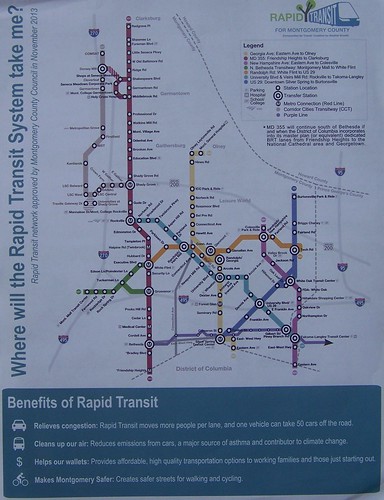 Promotional flyer for the creation of a bus rapid transit system in Montgomery County, 2014.

BRT as an element of a complete transit system.  I have written a bunch about BRT over the years too.  at first I was overfocused on how typically BRT as a mode is over touted and misrepresented ("BRT: an interesting contradiction").

But now I recognize that BRT has a role to play, as a key element within an integrated transit system.

Note that in North America, probably the best example of BRT is in Ottawa, the capital city of Canada, where 200,000 people ride the BRT system.

However, it is the exception that proves the rule, that without a number of other complementary policy changes which were put into effect along with the bus service, likely the ridership would have been minimal. Plus, unlike the services proposed for DC's suburbs, it is a service focused on serving the central business district, which because it is the national capital, is the primary destination in the metropolitan area.  Detractors point out that Ottawa already had high bus ridership--which has dropped since the introduction of BRT--and hasn't found a significant amount of new development being spurred by proximity to the BRT system

Key policies in Ottawa that support transit use include:

-- land use planning requirements that 40% of new jobs (office construction) must be located at BRT stops, along with retail and denser residential development;
-- limited provision of parking in Downtown Ottawa -- they have 300 spaces/1,000 workers where most North American downtowns have 600 parking spaces/1,000 workers
-- eliminating to the extent possible, the provision of free parking for employees downtown, especially for federal workers
-- encouraging flextime and other practices that time shift and extend the workday so that bus utilization can be maximized.

Another example: BIkeshare. Not being placed very strategically around transit. Or being coordinated well with bike lanes.

For instance, on the L st bike lane downtown they should have bikeshare every block -- right off the lane. Instead they got two there right on 19th and 20th, but nothing on the L lane until 15th. (And they don't put them on the same side as the bike lanes!)

Note that Ottawa is converting the core of the BRT system to light rail, opening in 2018, with plans for future conversions to light rail.

Montgomery County has workshops this and next week on BRT for Wisconsin Ave.

I don't know what to think about bike share. In the US it's a kind of hybrid from how it "is intended" to be used in Europe. There it complements transit--certainly that was the case with the earlier systems like in Germany.

Here it substitutes for it. Maybe it does in Paris too, since Paris is so dense.

But the intent was for it to provide fast connection between transit and the final destination of the rider.

Here the system is a mix of transportational and recreational.

I understand your point about L St. but then again, that stretch is all commercial.

I don't know what it's like in your office. I've talked about this with Suzanne and her experience with co-workers who live outside of DC. They only know the walk between the transit station and their office, and don't get out much beyond a block or two of where they work.

And they don't learn much about what is available "here" such as bike share. Even if there were decent media about the CBD (the Downtowner is unevenly distributed and it doesn't really have much "news" not like the Current), the likelihood of nonresidents seeking out and reading and processing and using such information is pretty remote.

Since the bike share system is paid for locally, not with general transit money, how much should DC invest in providing stations in the commercial areas like along L St.?

If we had the transit withholding tax, of course then it would be a different story, although there would be a tug of war between transit, road work, bike share, biking-walking, and placemaking improvements.

I'd say that is broadly true. Bikeshare in particular in DC has devolved mostly into commuter usage (which it isn't meant for) and tourists.

Plenty of usage outside those two as well but that is the bulk of trips.

And DC people are very serious and just want to think about their commutes. That is true of both DC residents and MD/VA.

In fact that is one of the strangest things about DC is how hyper-local it is. I like to think of myself as an exception but, for instance, I have no desire to walk up NH to check out Petworth or Tacoma. I will walk to Tenleytown or Navy Yard from U st now.

Going back to Bikeshare/L s/commercial usage, I'd say that it doesn't matter. If anything L could use a lot more people on weekends.

And thinking on it a metropolitan scale getting commuters to use L st more as a "complete street" and not as a traffic sewer would be useful.