A more radical approach to "Vision Zero" is needed: reconstructing streets out of different materials to reduce speeds

GGW has a piece, "Abdul Seck, the pedestrian hit in a crash in Anacostia on Sunday, has died," about the death of a pedestrian as a result of a crash caused by a vehicle driven (1) at a high rate of speed; (2) running a red light; (3) hitting another vehicle; (4) and careening vehicles ended up on the sidewalk, where Mr. Seck was walking.

(Ironically, a not dissimilar situation resulted in the death of a cyclist a few days before: "At vigil for fallen DC bicyclist, activists call for safer streets for bikers," WTOP-radio). A cyclist waiting at an intersection for the light to change was hit by a careening vehicle hit by a speeding van.)

The GGW article embeds lots of tweets from people writing about how they've asked for painting of crosswalks etc. which would have had zero preventative impact on the situation described above.

And as a contrast, just yesterday the Arizona Daily Star ran a column entitled "As pedestrians die, Tucson accommodates bad drivers,"  about the pro-motor vehicle operator planning paradigm there, where because aggressive driving is so rampant, transportation departments remove crosswalks so as to not give the impression that it is safe to walk across the street. From the article:


This is what we’ve come to in Tucson: Crosswalks are so dangerous that city officials consider it safer to remove some of them than to leave them in place. Otherwise, the officials conclude, pedestrians think they may actually be safe crossing the street at a crosswalk, which is obviously not the case.

Vision Zero. For all the talk of Vision Zero, which aims to:

and I've put forward various frameworks for implementing it here:

-- "A reminder about how the entitlement of automobility is embedded into law and democratizes death by accident," 2014
-- "A "Vision Zero" agenda for DC," 2014
-- "DC and Vision Zero Revisited," 2015
-- "Updating Vision Zero approaches," 2016
-- "First global benchmark for road safety in cities published by International Transport Forum," 2018

we are doing road redesigns in terms of adding various safety treatments, including narrowing lane widths, but the mobility paradigm still favors the automobile primacy.

Towards radical practice.  I suggest we change roadway materials in cities and towns in order to make driving slower.

It happens I wrote about this last month.  "Pedestrian fatalities and street design," responds to reporting on last year's pedestrian death statistics, which are on the rise.  (Also see "First global benchmark for road safety in cities published by International Transport Forum.")

The (re-ordered from the entry) argument is pretty basic:

1. On neighborhood streets, compared to automobiles, why are the rights of pedestrians subservient to cars?

2. Every community has "Boulevards of Death" which are particularly problematic.

3. We need to "dumb down" roads to make them better fit their context--freeways should allow for high speeds, neighborhoods streets and community serving arterials shouldn't enable high speeds.

4. Therefore, why aren't we re/designing streets in terms of the land use context? The transportation planning system develops all roads, to allow cars to be driven at high speeds, regardless of land use context.

5. The next step is to change the way we construct streets, so that desired operating speed of motor vehicles matches actual behavior.

Matrix of Design Values based on land use context: Walking cities need slower vehicle traffic. While it needs some serious updating and extension of the concepts presented, the Smart Transportation Guidebook does a good job in laying out a framework for considering "street design values" in terms of (1) land use context; (2) the purpose of the road (community vs. regional serving); (3) desired operating speed of motor vehicles; (4) roadway characteristics; and (5) roadside characteristics. 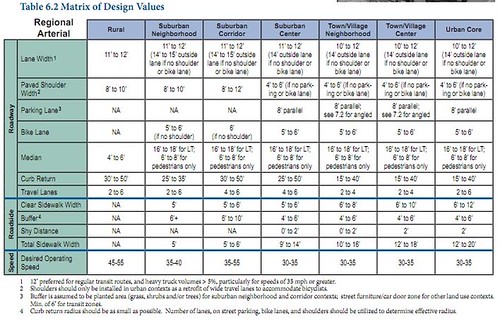 Although even the STG doesn't make the conceptual leap and consider the materials composition of roadways  as part of this framework.

Note that besides adding bike lanes and cycletracks to streets and other treatments, DC is pretty liberal about creating curb bulbouts at intersections and has created a handful of pedestrian scramble intersections. 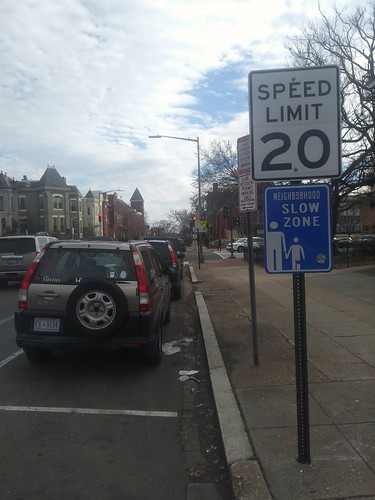 Signage and other treatments.  I've seen a "Neighborhood Slow Zone" sign on Capitol Hill, but it's the only one I've ever seen in the city, so I wonder if someone swiped it from somewhere else and put it up.  Except that it is with a 20mph posted speed limit sign, which is also out of the ordinary--I've never seen a posted 20mph speed limit on a DC neighborhood street--so maybe it's legitimate.

Reconstructing streets.  The next step for cities is to reconstruct streets to favor pedestrians(and bicyclists) over motor vehicle traffic. 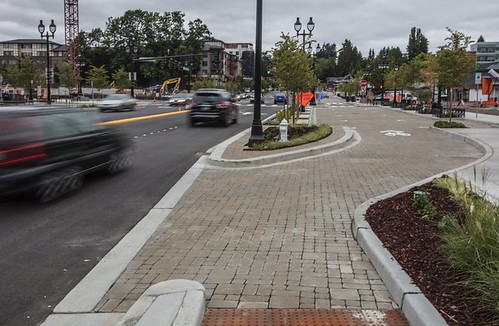 And the previous entries include various other examples, including remaining asphalt block street sections on some streets in Capitol Hill. 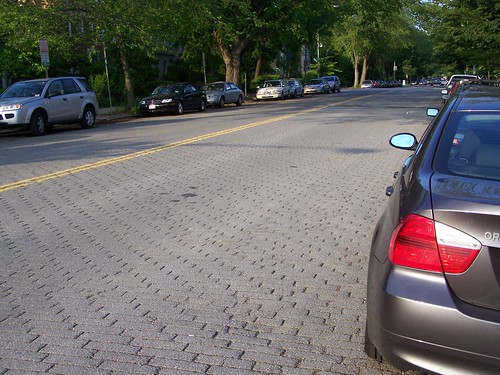 Next Steps: Beyond road diets.   Road dieting is a term referring to reducing street and lane width to reduce motor vehicle speeds, because higher speeds are associated with wider lanes and roadways.

How to convince cities to start reconstructing some streets is the question.  Using asphalt block is more expensive to construct, but the streets, if properly constructed last a long time, a lot longer than traditional asphalt paving.

In a city like DC, I recommend that we should start with areas around schools, parks, libraries, commercial districts, and transit stations where a preponderance of riders walk to and from the station.

But lately, I've been thinking it'd be good to reconstruct streets that experience a great deal of excessive speeding with asphalt block as an example too.

Premier Vision Zero Resource. WRT "towards zero deaths" initiatives, recently I came across some resources that are worth reading in order to be able to take a more regularized approach, A Road Map for Implementing the Toward Zero Deaths (TZD) National Strategy on Highway Safety (registration required). The materials include:

The materials were created by the University of Minnesota Center for Transportation Studies, with partners, for the Federal Highway Administration and the the American Association of State Highway and Transportation Officials.

The speed zone in that area was 15 mph.

If you want safer streets you have to target the dangerous drivers.

How is that possible? Where in DC are streets posted at 15mph. Alleys sure.

But yes, in the context of "vision zero" greater focus needs to be made on targeting dangerous drivers as you say.

So many incidents like this in SE, and PG County especially.

Probably using "big data" there is a way to identify problem drivers.

And years ago, I wrote about a program in HoCo where when police didn't witness aggressive incidents but they were reported, they would send a letter to the owner of the car identified, stating that a report was rec'd and presumably it is suggested that they shape up.

If you look at the GGW post, somebody has a twitter picture with a clearly marked 15MPH school zone.


FWIW, I 100% agree you on road surfaces which are the way to go. Narrowing the travel lane has the same effect.

Ancedote -- was just in Rome where it is was far far safer driving than in DC. Drivers there far more rational. Being a pedestrian is scarier as the drivers do wait until the last minute to brake for you but they do.

Larger point: I get that vision zero likes to target structure. Found it interesting that the mission statement just says "highway system" rather than city roads. But lets leave that aside. Also leave aside that DC streets are safe -- it is suburban streets that are the problem. (Low hanging fruit issue).

If you want to target road safety -- much like crime -- you need to target the worst 1% of offenders first.

in the ggw a long time ago which led to my subsequent writeups, while I didn't focus on the 1%, as you suggest (which is necessary), I did make the same point that DC's death rate was relatively steady, that the big problems were in the suburbs, that the system is relatively safe.

I got frustrated when "Brett" was writing about "back up accidents in driveways" and I said "that isn't an issue in the city, why are you bringing this up?"

... although that's not because it is always designed right, but because the bulk of the city is residential and the street network is a grid with relatively narrow streets outside of the arterials, and engorged with parking, so people have to drive slowly.

But that concept of measuring deaths by 100,000 of population is good, because then you can do comparisons and figure out what communities are doing an extra normally good job, and you can learn from them.

For me the two biggest things are (1) changing the road materials and (2) moving the speed limit to 20mph on neighborhood streets and in what we might call "pedestrian priority areas."

===
but yes, we should paint crosswalks, create more scrambles, etc., all the stuff I write about from time to time...

... everything I read about Rome says that it is undermaintained, potholes, etc.

The ironic thing about bad roads is that they slow cars down...

Roads are in about the same condition as DC.

In terms of the overall streetscape, pretty bad but again in the same realm as DC.

I did think DC looked fresh and clean when I returned which gives you an idea of the amount of grit around.

Tram network was fun. Buses were not. Subway was very dark.


But yes, big picture, a living model for why "broken windows" matters.


More smart cars than I'd ever imagine. Counted 20+ parked on one block.

It has a congestion zone as well; given the massive flow of tourists I don't think you have a choice.

Didn't know. Looked up ZTL. Interesting. It's sort of like the odd/even license plate system, but it can't be gamed the same way, by buying two cars.

The ZTL pass only authorizes a specific vehicle. The privilege it grants isn't transferable.

Taxis can't do street hails, but there are taxi stands across the city.

Again, the volume of tourists would only be analogous to the Smithsonian/mall area/white house/congress. The big problem in that area ins't cars but the tour buses.

as I said, in many ways Rome is far worse than DC but in terms of traffic control it is the same or better.

An hacker helped me to spy on my wife’s WhatsApp,mails and every text message that was sent to her iPhone and every deleted messages of the past six months you can message him through this number (+13852501115) or contact him via email at brillianthackers800@gmail.com