Advocates to Feds: We Need a New Traffic-Control Manual | My response: Create "the" Manual of Uniform Urban Mobility Control Devices

Streetsblog reports that advocates aren't happy with the new edition of the Manual of Uniform Traffic Control Devices, the comprehensive manual for road design because it has remained true to its roots of being focused on motor vehicle traffic, and less focused on sustainable modes like walking, biking and transit, and it fails to differentiate adequately between cities, suburbs, and rural areas in terms of appropriate recommendations.

“The whole document is really oriented toward improving motor-vehicle access and improving motor-vehicle speeds, and not toward the safety and mobility of all road users,” said Jenna Fortunati, a spokesperson for Transportation for America. “Given that it’s written through that lens, it’s kind of hard to make meaningful revisions, especially if you really want to put equity, safety and climate right at the center of these guidelines…We want the changes to be a little more holistic.”

I agree this is a problem.  But not so much for the major cities, who through the organization National Association of City Transportation Officials, have been providing such guidance through manuals available online and/or published by Island Press.

And they've been getting approvals for more urban appropriate approaches for the last 15 years, pretty consistently.

Interestingly, NACTO was created as a response to the existence of AASHTO, the American Association of State Highway and Transportation Officials, who were seen to be more suburban and rural oriented, and less interested in or focused on the needs of cities. 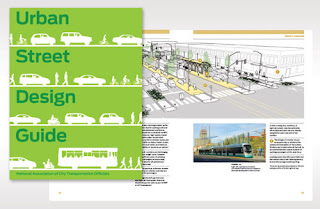 And so many cities and transit agencies have produced superb design guidelines, manuals and plans on pedestrian and bicycle design, urban design, transit facilities, etc.

Why not create the MUUMCD?: The Manual of Uniform Urban Mobility Control Devices.  The guidance is out there.  It just needs to be compiled. And sometimes you just have to do it yourself, because it's too difficult to get traditional organizations to change without seeing a finished example of what you're trying to do.

I don't see why Transportation For America/Smart Growth America, working with groups like NACTO, Transportation Alternatives (NYC), Feet First (Seattle), and other best practice organizations don't just try to get a grant to create a Manual of Uniform Urban Mobility Control Devices (MUUMCD), as proof of concept.

The issue isn't so much with the cities that understand this, like NYC, SF, Seattle, etc., but the places that rely on MUTCD for guidance, in communities that aren't particularly visionary when it comes to planning beyond the automobile.

Why "Mobility" instead of "Traffic" Control Devices.  It's about mobility, not just traffic, and by using the word mobility instead of traffic you can include "devices" beyond traffic control, but are still very important to mobility networks.  For example, electric charging facilities, bicycle parking ("Another mention of the idea of creating a network of metropolitan scale secure bicycle parking facilities"), and bike air pumps and repair stands, transportation demand management initiatives, mobility hubs, etc.

There is plenty of best practice out there already.  One manual that has significantly shaped my thinking is the Smart Transportation Guidebook.  While it too needs to be updated, it provides a good framework for thinking about how you create and design the mobility network according to land use context and whether or not arterials are regionally or local serving, with a focus on serving all modes, rather than planning for the motor vehicle and bolting on accommodations for other modes afterwards.

Using that kind of framework, everything just kind of flows outward, hierarchically, and is internally consistent. 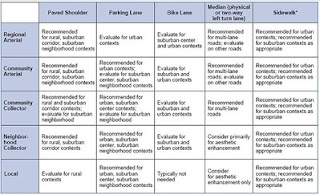 For example, this recommended guidance for bicycle facilities is something I produced for the bike and pedestrian plan I did in Baltimore County. It's 10 years old, needs an update, but it shows how guidance flows depending on road type and traffic volume. 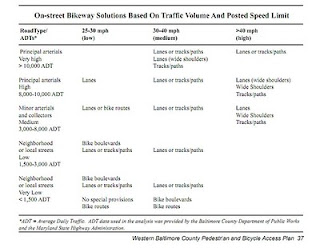 Similarly, I brought up the Cuyahoga Greenways Plan in an e-conversation I had yesterday, so I re-skimmed it, and it has a great set of cross-section diagrams for different types of facilities, which are recommended depended on land use context and other conditions. 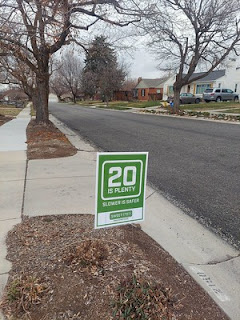 WRT what is appropriate for cities and what isn't, one is speed limits.  The standards approved by states are usually too high for cities, which makes operating speed on residential streets 30-35mph as the default.

Speed limits in DC were 25mph, but now are 20mph on residential streets.  The "20 is plenty" movement started in Europe, although on the continent it's 30/50 in kph.  Montreal initiated a 30/50 kph program more than 10 years ago ("Bicycling as traffic calming").

Or roundabouts.  I always complain when people suggest roundabouts as a center city street design treatment. I make the point that roundabouts are about facilitating movement of motor vehicle traffic, and conflict with the goal of promoting sustainable mobility -- biking and walking.

(Although some treatments on bicycle boulevards use circles and diverters that are similar, but they work because they aren't on main arterials and collectors.) 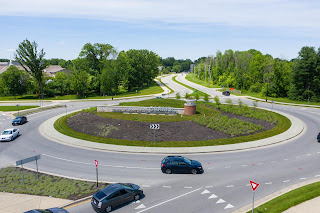 A roundabout in Carmel, Indiana

Instead of duplication how about integration?  The thing is that sometimes I complain that every jurisdiction wants to create their own plans and manuals, and so there is incredible duplication of work.

This is an area where metropolitan transportation planning organizations could step up, or the states, and create master documents covering multiple jurisdictions.  In fact, that's the root of the Smart Transportation Guidebook, which was created by the Delaware Valley Regional Planning Commission.  Based in Philadelphia, DVRPC serves both New Jersey and Pennsylvania, and the Guidebook was supposed to become overarching guidance for both states.

For example street design guides for NYC, Seattle, San Francisco, and Minneapolis are best practice.  Bike and pedestrian planning guidance for Utah, and the Utah Transit Administration's guide for transit station access.  SEPTA's guide for trolley stations, From Here to There: Creative Guide for Making Public Transport the Way to Go from EMBARQ.  The NACTO guides.  WMATA's typology of transit stations in terms of providing bike and pedestrian access.

So many books, The Pedestrian and Bicycle Planning Design Guide by Velo Quebec, Dutch bicycling best practice books, and plans from all over the world, such as the German national bicycle plan, which calls for a "bicycle traffic system." 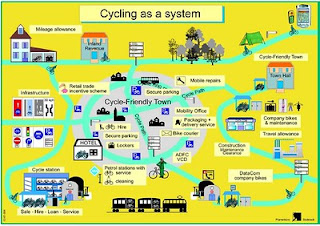 When I was writing a series of articles on culture-based revitalization in EU cities, I came across an out of print set of best practice guides for transit for small to medium sized cities.  At the time, I couldn't find most of them, but now they seem to be online in various places.

When I was complaining about how the DC master transportation planning process was organized, I suggested that people needed to be introduced to best practice as part of the process, and this was "a brief" list that I compiled.  There is so much out there.

Eight years later, there's even more in the mix. 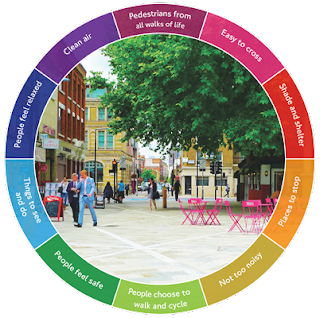 Note about developing an actual Manual of Uniform Urban Mobility Control Devices.  Consensus versus optimality.  One of the problems with creating documents like the MUTCD is they are developed by committees, with consensus.  It's not that consensus is bad, it's just in the case of transportation manuals and reports, consensus can produce documents that are somewhat "dumbed down" towards the "lowest common denominator" rather than optimal best practice.

That's why I say, "develop our own manual for cities," at least as a draft proof of concept, because then it can start from a more hard core position, than if it were dumbed down by representatives from suburban and exurban places.

It will be a humungous book, set it up as chapters. Also, it probably needs to be set up as multiple stand-alone "chapters" by mode, not unlike how some of the reports are produced within the Transit Cooperative Research Program of the National Academy of Sciences.

One thing FHWA isn't big on is specially painted crosswalks, out of a belief that they confuse drivers.