I have an extensive series of pieces about how DC could have used the reconstruction of a hospital East of the River to create a complementary medical education and biotechnology research and development initiative.  (It was based on a proposal I first wrote for the Walter Reed Campus in Northwest DC, but it was too late in the process and DC had no willingness to reconsider its very dull program for the site.)

-- "Ordinary versus Extraordinary Planning around the rebuilding of the United Medical Center in Southeast Washington DC | Part One: Rearticulating the system of health and wellness care East of the River," 2018
-- "Part Two: Creating a graduate health and biotechnology research initiative on the St. Elizabeths campus," 2018
-- "Part three: the potential for donations around an expanded program," 2018
-- "Update on DC's plans to build a new United Medical Center," 2018

Even though DC has failed to think big about the new East of the River hospital, that doesn't mean it can't be applied elsewhere. 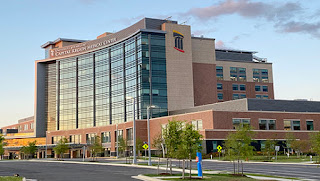 With covid, I wrote a follow up piece mentioning the new University of Maryland Medical System hospital in Largo, how it's unlikely they are taking advantage of the opportunities for innovation in health care delivery and that were they to do so, incorporating public health initiatives would be in order.

(The comment sections of the articles have a number of follow up citations of interesting, relevant programs and information that I have come across since writing the original pieces.) 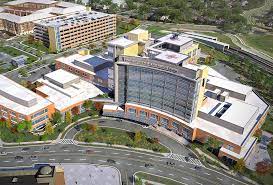 But while writing the earlier piece today, "The East-West Divide | DC area regional economic development: anchors and where they are placed matter + airports | But military spending matters the most,"  it occurred to me that the University of Maryland College Park/UMMS could do what I suggested with the former Walter Reed Army Hospital Campus in Northwest DC or the United Medical Center in Southeast DC, for the new hospital campus in Largo in Prince George's County, which is part of the "east side" of the region that lags economically.
It turns out that the newly constructed hospital is opening this week ("Long-awaited new hospital in Prince George’s to open this week," Washington Post).  From the article:

The University of Maryland Capital Region Medical Center, located near the Largo Town Center Metro station, originally was scheduled to open in 2017. But construction was delayed for years because of clashes about funding and the hospital’s size. The 620,000-square-foot, glass-paneled facility will replace the 75-year-old Prince George’s Hospital Center in Cheverly, which will transfer its patients this weekend.  ...
County officials are pushing for the hospital to anchor the creation of a bustling downtown Largo, where they are moving government buildings and actively recruiting businesses. They also want the hospital to compete with neighboring jurisdictions for top-flight medical talent, and to attract patients from Prince George’s who currently seek treatment outside the county.
“What the hospital means for Prince Georgians, from a health-care perspective and from an economic development perspective, is that it begins the healing process,” said Prince George’s County Council member Derrick Leon Davis (D-District 6). “There’s a sense of pride . . . but also a sense that more is to come.”

FWIW, Largo's urban design is not downtown-focused at all, but very automobile-centric and the lots are very much hermetically developed in a way that is disconnected.  (Besides, I've already argued that Prince George's County should build its "downtown" out of New Carrollton, "Setting the stage for the Purple Line light rail line to be an overwhelming success: Part 4 | Making over New Carrollton as a transit-centric urban center and Prince George's County's "New Downtown".")
Plus, hospitals turn out to not be great anchors for commercial districts and spillover, because staff pretty much are given no time to leave the campus.  That being said, hospitals in Philadelphia have provided financial support to business improvement districts, and many hospitals (at least the ones that aren't broke) have provided mortgage assistance to staffers choosing to live in the neighborhood around the hospital.

The stakeholders are right on one dimension, Largo has lots of build out capacity.  Land is underutilized.  There is plenty of room in the area to add medical education and research facilities.  AND to change the urban design pattern.  I'd focus on that rather than "creating a downtown."

The UC San Francisco campus is focused on advanced medical education.  It was originally the "San Francisco medical campus" of Berkeley, but has been independent of Berkeley since 1964.

No reason that UMCP couldn't develop a health campus at Largo.  Probably University of Maryland Baltimore would see this as competitive but I see it as more complementary.

And frankly, UMB could run the proposed PG County medical campus as they already have functioning medical, dentistry, pharmacy, and nursing schools.  College Park has only one health related school, in public health, but also Agriculture and Engineering.

As discussed in the original series, there is a significant projected shortage of physicians, especially primary care physicians, and with the failures in dealing with covid, ideally the country will begin to reinvest in public health.  And College Park is a step ahead, having a public health school already. 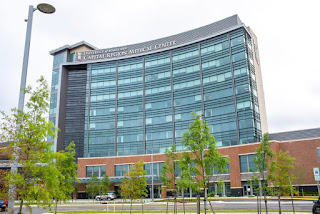 Note that from the "build it and they will come" approach to economic development [I should start using that as an index term], elected officials argue that by default the hospital will correct health inequities.

... Many Democrats said that view didn't take into consideration the lack of medical infrastructure in Prince George’s, where residents disproportionately suffer from conditions such as heart disease and diabetes and there are far fewer physicians and hospital beds per capita than in neighboring jurisdictions. The county has 0.75 hospital beds per 1,000 residents, for example, compared to 1.47 in Montgomery County, 1.47 in Fairfax County and 3.42 in the District.

Davis, who began pushing for a hospital in Largo when he was elected in 2011, said he still thinks the hospital should have more beds. He said he hopes that state officials support an expansion in coming years after seeing the toll of the coronavirus pandemic on the majority Black jurisdiction, which had the highest per capita case and death rates in the region.

“Nationwide, covid highlighted the fact that there are significant disparities in health care for Black and Brown Americans . . . this hospital is going to be part of that recovery,” said former Prince George’s County executive Rushern L. Baker III (D), whose administration signed a memorandum of understanding with the University of Maryland Medical System in 2011 that led to the construction of the hospital.

I argue that building something isn't enough, you have to have a plan to address the inequities in innovative and novel ways.  Plan + building.  And ideally, a "transformational projects action plan" approach to boot.

That's what the previous articles are about.  Also see:

-- "Health planning vs. hospital planning redux," 2006
-- "Piling on the hospital issue," 2006
-- "An opportunity for rethinking health and wellness care in the District of Columbia," 2006
-- "Speaking of rethinking how to offer "public services" and medical care," 2007
-- "Community Health Improvement Planning," 2019
-- "A glaring illustration of the need for comprehensive health and wellness planning in DC: Providence Hospital," 2018
-- "Rush Medical Center (Chicago) clues us into a gap in state and regional health care planning: planning for disaster and epidemic response," 2020

In the original Walter Reed campus proposal, we proposed the development of health related graduate schools in conjunction with the Washington Adventist University in Takoma Park and the Royal College of Surgeons in Dublin, which has opened medical schools in other countries.

Like how the Texas Medical Center in Houston has multiple medical and health-related schools from different institutions, like Baylor and the University of Texas Health Science Center, there's no reason to limit it to just one.

This article, by the president of PG County Community College, mentions that they developed technical health professionals training programs for UMMS and Medstar.