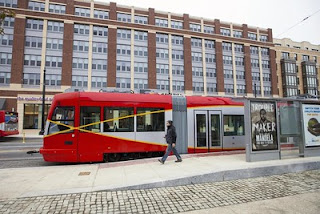 In fact, in 2016, Seattle opened its second streetcar line, on First Hill.  Work is underway to connect the two lines, and further extend the streetcar, which complements light rail and bus modes within the city.

DC's failures in streetcar planning contributed to Arlington's decision to drop its parallel streetcar effort in 2014 ("5 years later, battle scars over Columbia Pike streetcar are still healing," Sun Gazette/Inside NoVA).  If only Arlington was near Seattle.

And the failures of DC in planning for and implementing the streetcar is often held up by opponents to streetcar and light rail projects elsewhere as an example of failure, incompetence, and by extension, the likelihood of failure of in their own communities ("A streetcar not desired," Politico, 2014).

In fact, I've since made the point that planning and transportation officials have a duty to not fail as part of their overall professional responsibility, because of how their failures can have unintended negative impacts elsewhere.

Since these failures, DC has decided to not extend the streetcar west to Georgetown ("D.C. drops plan to extend streetcar line to Georgetown," Washington Post), crippling its potential to be useful, although they are willing to extend it eastward.

Planning for other lines has long since ended, making the line a one-off making the mode generally un-useful ("DC and streetcars #4: from the standpoint of stoking real estate development, the line is incredibly successful and it isn't even in service yet, and now that development is extending eastward past 15th Street NE," 2015).

Ironically, even as a failure, the streetcar has shaped as much as $1 billion in new development on the H Street NE corridor, and further extending development up Bladensburg Road and beyond 14th Street to Benning Road. 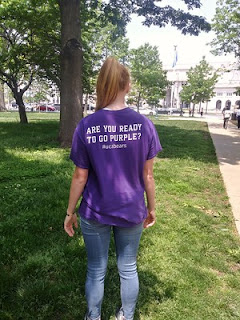 2.  Suburban Purple Line light rail project, Montgomery and Prince George's County, Maryland.  This project has been going on for a couple decades all told.  It was junked during the Republican Ehrlich Administration (2003-2006) in favor of a toll road.  Then it was revived under Democratic Governor Martin O'Malley (2007-2014).  Then new at the time Republican Governor Hogan threatened to eliminate it once again (2015), but at the expense of a similar project in Baltimore ("Five years later, many across Baltimore bitterly lament Gov. Hogan’s decision to kill the Red Line light rail," Baltimore Sun).

But the Republican Governor, eager to have the private sector fund it, created a "Public-Private Partnership" to partly finance, design, engineer, build, and operate it.  Disputes over cost overruns led the construction group to bail out.

(I tried to get a job with one of the bidders.  But they lost, and the experience was so bad they decided to shut down the unit of the corporation that was to bid on similar projects across the country.)

The ongoing debacle of the Purple Line certainly doesn't help the arguments of proponents of transit.

How's that partnership working out with the private sector?

... recently I saw an article recently making the point that in privatization and outsourcing we redefine transactions as partnerships.

3.  DC area Metrorail (Washington Metropolitan Area Transit Authority) and the failure to proactively deal with faulty wheels.  I haven't written about this even though it's been a problem for months because it's just so depressing. 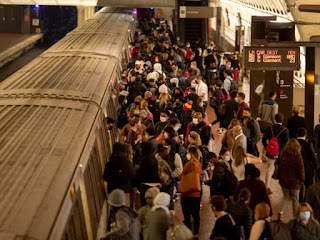 The tragic thing is they knew about the problem, had frequent derailments, but kept letting it slide, until they were forced to take the trains out of service ("WMATA Experiences Continued Delays Following Train Derailment, Inspection," Georgetown Hoya, "Metro 7000-series safety problems 'could have resulted in a catastrophic event'," WAMU/NPR), "Washington Metro Pulls Most Train Cars From Service After Derailment," New York Times) so many that on most lines they operate fewer than 3 trains per hour, making transit completely unusable as a single train has capacity of about 1,200 to 1,800 passengers.

It makes the "service" completely unusable.  Forcing people to drive, to buy car even..

4.  WMATA is systematically failing.  Worse, the derailments are merely one and the latest problem in a long list of severe safety failures, evidence of ongoing systematic failure:

As they say, the fish rots from the head. 12+ years of systematic failure ought to have consequences.

Much of the top management should be canned.

All of these incidents remind me of the discussion in the Asimov Foundation book series, in the discussion about the decline of the Empire, the inability of people to manage and operate things:

Mallow goes spying at a Siwellian power plant, noting that it is atomically powered (atomic power is the benchmark of technical civilisation in the Empire) but that the technicians – the tech-men – don’t actually know how to maintain it.

Note that despite funding problems which will lead to severe delays in building out the system, Sound Transit continues to expand the Seattle area light rail system, with the newest extension just having opened in October.  Each expansion results in significant increases in ridership.

And Seattle's new Climate Pledge Arena includes free transit use (except ferries) with tickets for hockey and women's basketball games, and other ticketed events, like concerts.

Oklahoma City 's streetcar opened in 2018 and seems to be supported ("Development, rather than ridership, a measure of success for Oklahoma City streetcar," Daily Oklahoman).

But the failures seem to garner a lot more attention.

Unless you know more than your contractors, they are going to fleece you.

The amount of people with engineering knowledge at WMATA is very limited.

The Chair of GGW was appointed to the WMATA board. Again the Foundation excerpt is very timely. zero transit knowledge. Zero engineering. Zero communications. zero ability to sell this to local government partners.

Reading between the lines, the safety commission wants to see "root cause" before they allow it on the tracks, and WAMTA doesn't want that as it will eventually go back to them rather than Kawakasi.

I used to think Dan Tangherlini was really great. He eliminated the engineering group "because we aren't going to be building any more" as they devolved responsibility for expansion to the jurisdictions.

Before that I talked to a Metro engineer. He talked about how management took away their work cars, to save money. He said when they had the cars, they would go from home to site, providing more time on site, for oversight, etc. Without the cars, they had to go to the office first, and over time it severely reduced time on site.

I will say that yes about GGW, but it is possible to know more of what to do and not be an engineer, but it is increasingly unlikely. Especially as politics and power becomes more important than expertise (Trump, Johnson, Cuomo). Wrt Cuomo he "flawed up" both MTA and the Tappan Zee Bridge on the transit dimension.

While I think there would be the not invented here problem to rebuild WMATA I would create the VV and then I would bring people from Germany or Paris or MTR or Singapore or JR/Tokyo or Seoul. Basically the best of the best.

Picking the dude from Maryland basically meant not striving to improve, that it was merely a management thing, not a transit thing.

Wrt the general failures I am proud of the point that Metrorail was at a steady state, but the Silver Line stressed the system beyond it, and that interlining doesn't contain problems, but spreads them to other lines, like a virus.

Wet Dan T. On the second sentence I meant to lead with the word "Then..."


Wrt the cars issue, I had that issue in Baltimore County. When I was doing work in South County, I would just get dropped off at Halethorpe or sometimes at a light rail station to go to Camden (normally I would go to Penn) so I could spend mote time in the field, and not waste time going back to the office.

If it weren't for the political tensions, even people from Moscow or St. Petersburg subways.