At first I thought that it made more sense to do it in May, because in many places that is "Bicycle Month," but actually June 3rd can be the crowing achievement date "ending" Bicycle Month.

Having been busy doing other things, I am not prepared today to publish my ideal program for a community aiming to work diligently at developing a significant percentage of bicyclists as a regular part of "traffic."

By significant, I mean at least 10% overall, and more in the neighborhoods and districts that have more of the preconditions that support sustainable mobility. 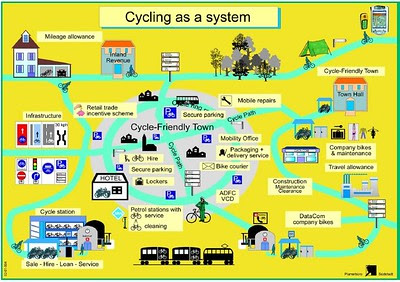 From the 2002-2012 Germany National Bicycle Plan
One of the big influences on my approach to bicycling as transportation was a paper by Rutgers professor John Pucher, an international leader in research and writing on sustainable mobility, especially transit and biking,
-- "Making Cycling Irresistible: Lessons from The Netherlands, Denmark and Germany." Transport Reviews, 2008 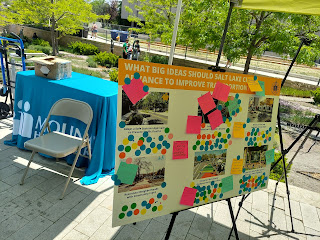 My one super big idea for Salt Lake City biking.  Salt Lake is going through its update of the transportation master plan.  They have booths at local festivals and such.

One of the boards is on "Big Ideas" but they aren't "that big," imo.

More like important topics.  And given all the master plans I've read, the biggest failure is to translate the ideas into action.  That requires the right kind and specific types of programming.

One of the reasons is that while "the valley" is flat, on either side are the foothills and mountains (where the recreational cyclists go), which are daunting.

Between the elevation and its effect on me (way higher than DC) and having to climb a steep hill to get back home (there are a couple of streets with a relatively workable incline, but they are many blocks out of the way) I get wiped out.  Yes, I am considering an e-bike, but I am hoping to put it off for a few more years. 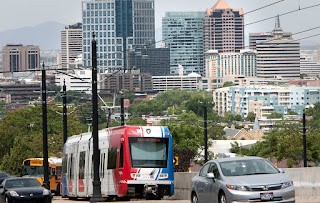 (Steve Griffin | Tribune file photo) A UTA TRAX train climbs out of downtown Salt Lake City as it heads to the University of Utah on June 24, 2013.

So my one big idea, as part of an overall serious in depth program to promote bicycle transportation is making the light rail free going up the hill, between 600 East--the edge of Downtown--and 1400 East--the "bottom" of the University of Utah campus.

Like the Trampe Bicycle Lift, it makes the topography much less of a barrier to every day cycling ("Norway’s 450-foot-long ‘bike elevator’ is like a ski lift for cyclists," Business Insider).

-- "Is Montreal the number one city for bicycling in North America," 2010

-- "Revisiting bicycle (and pedestrian) planning and the 6th 'E': equity and the City of Minneapolis Bicycle Master Plan," 2015

-- "Why not a bicycle hub at National Airport?, focused on capturing worker trips but open to all," 2017

-- "Bike to Work Day as an opportunity to assess the state of bicycle planning: Part 1, leveraging Bike Month," 2019

-- "It's a mistake to remove "Enforcement" from the "E's framework" of bicycle and pedestrian planning," 2022