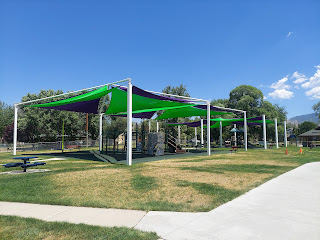 Yesterday, I really wanted to check out some parks in South Salt Lake, and I went for a bike ride to do so when the temperature was 106°.

Not too smart (did help me lose some weight).  I was struck by how this one playground facility in Fitts Park was the only one I've ever seen with shade screens.

I doubt it was to deal with the heat specifically.

More for design aesthetics probably, but increasingly these kinds of measures should be taken within parks and place planning, to make places more resilient wrt heat and sun. 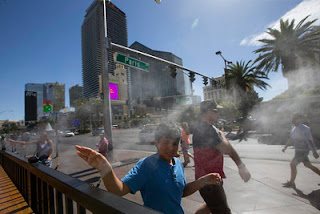 For example, in bike planning, I keep mentioning misters. But misters probably should be deployed more widely as a matter of public space management.

I've discussed a few times, Heat Wave, the book by sociologist Eric Klinenberg which studied the impact of a heat wave on the vulnerable in Chicago, and the conditions and characteristics between neighborhoods with similar demographics concerning the poor and less resourced, and how these conditions shaped outcomes positively or negatively.

There's been been writings recently on Phoenix especially, with summer temperatures over 120°, the impact on vulnerable populations, and their response ("As Phoenix swelters, the nights are even worse than the boiling days," "Unhoused in Phoenix’s perilous heat: ‘If I don’t keep cool, I’ll die’," Guardian).

Phoenix was one of the first cities to appoint a "heat officer," to coordinate municipal action and response on the issues ("Climate change is already here in many US communities | "Heat Officers" versus Climate Change Officers").

The Washington Post has three articles today on the topic:

-- "U.K. braces for record temperatures as ‘heat apocalypse’ hits Europe."  As Europe has experienced rising temperatures over the past 20 years, institutions are taking more measures to reduce the negative impact.  For example, 75% of housing in France doesn't have air conditioning.  French nursing homes are taking measures to provide for "extreme" cooling in the face of extreme heat, etc.

-- "Climate change is pushing hospitals to tipping point."  From the article:

Each of the organizations that signed onto the pledge — which included public hospitals, health-care centers, pharmaceutical companies, medical-device makers and suppliers — are expected to develop climate-resilience plans for their facilities, including plans to support individuals or communities most vulnerable to the effects of climate change.

According to Ebi, any plan should mention what she called the “low-hanging fruit,” including:

-- "A Texas meteorologist warned of power outages. Then the lights went out." This has to do with managing energy demands in the face of extreme conditions.  It's interesting that as part of weather forecasting, television meteorologists report on electricity availability.

Increasingly, Texas' energy generation system is stressed whether it's hot or cold.   But it's not just an energy production and regulation issue, it's a matter of public health.

For example, Texas public water systems were damaged by the power outage in the extreme cold, health facilities and their ability to provide services are affected, and of course, the weather-related deaths, which arguably totaled in the thousands.

Plus there are other climate change risks, like wildfires, flooding, etc.

The Guardian: This heatwave has eviscerated the idea that small changes can tackle extreme weather.
https://www.theguardian.com/commentisfree/2022/jul/18/heatwave-extreme-weather-uk-climate-crisis

The Guardian US: Alarm as fastest growing US cities risk becoming unlivable from climate crisis.
https://www.theguardian.com/us-news/2022/jul/20/us-fastest-growing-cities-risk-becoming-unlivable-climate-crisis