(charlie a long time ago said it would be interesting if I would write more about what I learn about Salt Lake.  Now, with things moving back to a kind of endemic covid normal, I am learning more about programs and initiatives in the area and from time to time I will write about them.)

Ever since I was in college and an involved student, I have been interested in "town-gown" relations between schools and communities, and programs that help the latter.  This has been the case partly because many universities, like Yale in New Haven, Penn in Philadelphia, University of Chicago on the South Side, etc. are (or were) in economically languishing communities.

-- Business development initiatives ("How the closure of a Pfizer research center in Ann Arbor, Michigan led to the development of a biotech sector there," "Naturally occurring innovation districts | Technology districts and the tech sector")

I have been pretty critical of DC's universities for not being particularly engaged with the city, although there is probably more interaction than I know about it.  Still, for decades, not one DC-based university was a member of the Coalition of Metropolitan and Urban Universities, and none really have a stellar urban studies program. 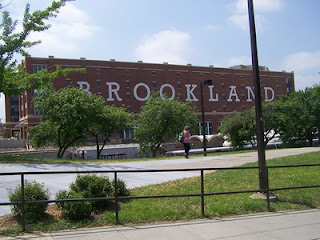 One of the Monroe and Market mixed use buildings, Brookland neighborhood.

Catholic University is about the only university doing a major campus adjacent development program.  Interestingly I got in an e-mail discussion with the author of a recent encomium about CUA's retiring president ("John Garvey improved Catholic University — and Washington," Washington Post).

The author attributes Brookland's revitalization to President Garvey's efforts while I pointed out that the real estate development project he was inferring started at least 6 years before the president took office in 2011--the project starting delivering as he became president.

And at the University of Maryland, community programs serving area communities seem to wax and wane depending on the university's economic circumstances.  After the 2008 recession, they dropped their primary outreach program.

That's why I find the University of Utah University Neighborhood Partners program to be pretty interesting.

The University is based in the east part of Salt Lake City, which is the city's wealthier section, at the foot of the Wasatch Front mountain range. 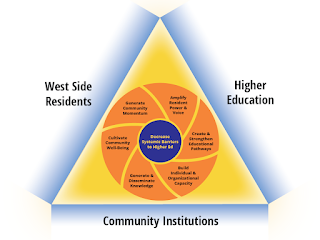 Partnerships target university and community outcomes, all feeding into the long-term goal of decreasing barriers to higher education, but also focused on place-based community improvements.

The UNP program provides directed access to university resources to the west side of Salt Lake City and increasingly to westside Salt Lake County, which is less well off economically, with a much greater range of ethnic diversity.

And it's about 21 years old, with much more staying power and commitment than I remember from university initiatives in the DC area ("How University Neighborhood Partners helps west side leaders," Salt Lake Tribune). 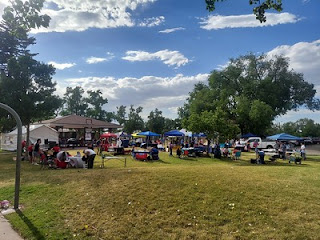 Partners in the Park event in Poplar Grove Park.

Besides various action research initiatives, UNP also sponsors events around the community, like the Partners in the Park resource fair, where various partners in the UNP program have exhibits and community members can talk to people conveniently in their neighborhoods, without making special trips.

Impact.  The real question is how much economic and social impact.  That I don't know and need to look into more deeply.

There's definitely a lot of personal impact, with more west side youth going to the University of Utah and other higher education institutions for college.

The areas don't seem "revitalized" but on the other hand, they don't look so poor either.  Sure, somewhat disinvested compared to the east side.

Westside Salt Lake has no center.  I think the biggest issue is that there aren't really strong "town centers" on the west side the way that there are on the east side ("Thinking about the opportunities for success with neighborhood commercial districts: comparing Manor Park in DC to 15th and 15th in Salt Lake").  Plus so much of the land is zoned industrial that from the residential perspective, it's going to lag.

I do know with a regular Main Street commercial district revitalization program ("Basic planning building blocks for urban commercial district revitalization programs that most cities haven't packaged: Part 1 | The first six") that it takes a couple decades and ongoing efforts beyond to see real improvement.  So from that perspective, 21 years is just getting started. 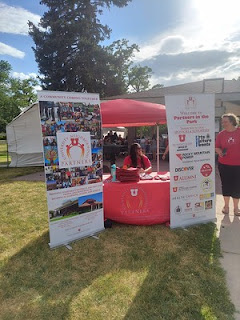 It was in 2001 that University of Utah President Bernie Machen (1998-2004) recognized and took ownership for the fact that, as an institution, the U was little involved on the west side. Determined to change that, he turned to Irene Fisher, then-director of the Bennion Center, to change the University’s role from absentee to west side community partner.

Fisher spent a year - yes, an entire year - just interviewing west side community leaders and organizations about what they wanted from the University. And the finding from all that listening?

“They wanted to be listened to more,” said Mayer-Glenn. West side leaders also said they were, “tired of being studied and then the U would just disappear - doing research with no real impact or usefulness to the community.”

In short, west side residents didn’t want to be rescued, they wanted a partner who would seek to understand them. That meant listening, and staying to listen. So, second, listening is about an ongoing conversation.

Mayer-Glenn explains that, out of conversations, key issues emerged. “We don’t bring solutions, we find leaders and then we help them develop their own capacity to realize the change they want to see in their community.”

That usually starts with a leadership “pipeline” where a cohort of community members take a low-cost, team-based leadership course. “Sometimes sparks happen,” said Mayer-Glenn, “and an idea and a plan emerges.”

As a project takes on shape and substance, the next step in the pipeline is UNP’s startup incubator that provides additional capacity-building support. From the incubator a number of (primarily) nonprofit startups have emerged that serve the west side community.

“It is because of organizations like UNP that we have been able to grow and increase the connections and opportunities and access we need,” said Javier Alegre, executive director of Latino Behavioral Health Services, one of the first organizations to emerge through UNP’s leader pipeline.

Although maybe the next step is to do something like the "George Miller" idea for Philadelphia's Navy Yard ("The other George Miller idea: creating multi-college innovation centers in (cities) Philadelphia | Creating public library-college education centers as revitalization initiatives"), or what the University of Michigan is doing in Detroit ("Detroit Center for Innovation to be built in The District Detroit," University Record), on the west side.

It could also help create a more defined downtown of west side.

The University's health system is going to be doing something not dissimilar in West Valley City ("A big hospital complex is coming to West Valley City. See what it will have," Salt Lake Tribune), providing better service to an underserved area, but also expanding the University of Utah Health system, which has tended to be focused on its medical campus, while other hospital systems in the state are extending their networks across the state.

Thx for thinking of me. Will read. I couldn't help but think of the Bowie song "Boys," substituting the word noise.

WRT the story, again, thanks for sharing. All I can say is, "welcome to the 'hood." This is what happens with reproduction of space and "contestation." That was H Street in a nutshell.

I joke that I wish that _Code of the Streets_ and _Streetwise_ had been published before I moved to Washington in 1987, because then I would have been a lot better prepared.

The thing is that DC is so small basically, that as areas change, they aren't separated so much geographically, but touch. Unless you are talking about the neighborhoods on the other side of the Anacostia River.

But in W6 and W1 and W4 in the Georgia Avenue Corridor, W5 towards Rhode Island Avenue especially the Edgewood Terrace complex, and W2 in Shaw you get this "friction."

And just like in Streetwise/Code of the Streets, people get tested.

This article in Atlantic led to the book...