WMATA is pathetic: of course it belongs to "the public"

In college in the early 1980s, the University of Michigan repositioned its focus on fundraising (what universities call "development") in part by hiring a top development official from Stanford, creating a new campaign, etc.--the University has successful raised billions since.

In an interview the new VP for Development said something like "students don't think about it, but they become alumni in four years," making the point they (we) should start thinking about donating.

My response was "neither does the university, because if they did they would invest a lot more in the quality of the student experience." Although 40 years later my sense is that they invest plenty in that now. 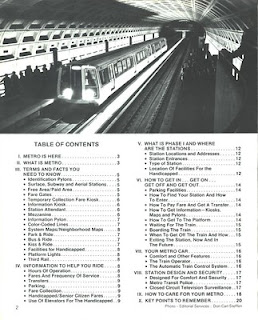 Metro (WMATA) Owner's Manual: Your Metro...How to Use It, table of contents, Advertising supplement to the Washington Star, 3/21/1976.

The capital improvement program reflects the region’s commitment to maintaining and improving your community’s $100 billion transit asset. The question of how best to fund Metro is an important one that requires thought leadership and extensive community input. It begins with “What do we want Metro to be?” Together with our board of directors, who represent our regional governing jurisdictions and the federal government, we are developing a strategic transformation plan that will address our funding future, fare policy and service equity and frequency, which we look forward to talking with customers about over the next several months to help us set Metro’s goals.

In the near term, we are supporting returning customers with more rapid social media engagement, and extended customer service hours Monday through Friday 7 a.m. to 8 p.m.; and Saturday and Sunday 8 a.m. to 8 p.m. For frequent, new and visiting customers, we are piloting new signage, beginning with putting service information at street level at Metro Center. We are also going to test way-finding signage to the new Dulles station in 33 stations and seek feedback from the community. ...

Everyone at Metro is focused on providing the excellent experience our customers and the region need and deserve. We are keeping customers at the center of everything we do. Operating safely isn’t a choice. It’s either safe or we won’t do it. I am empowering all staff members to own our service outcomes and to proudly represent America’s transit system.

As you travel the region this fall, I hope you will choose Metro. We beat traffic and gas prices, and we fight climate change. Though I am privileged to be the general manager, it’s your Metro, so please let us know how we can serve you better.

Despite publishing the op-ed, other reporting in the Post says the situation is dire, "Fallout grows from Metro’s train shortage amid safety probe."

People like me have been saying this for years, that WMATA needs to invest in its relationship with area residents as customers, riders, funders (as taxpayers), and supporters of transit.

My concept of a "complementary investment program in the transit network in association with the introduction of new transit infrastructure," in this case the Purple Line, had a number of suggestions for improvements in "our Metro."

In 2009, after the crash which killed 9 people, I wrote that WMATA needed to update and rebuild the regional consensus on the support of transit, because in the 40ish years since the beginning creation of the system, most all of the original leaders have since died or moved on, and the millions of new residents in the region never participated in the development of that system.

-- "St. Louis regional transit planning process as a model for what needs to be done in the DC Metropolitan region"

Plus, once the system opened, it took for granted the need to constantly invest in building and maintaining support.

In fact, I mention that as an issue a lot in terms of funding.

Now that the system is in ongoing crisis ("Getting WMATA out of crisis: a continuation of a multi-year problem that keeps getting worse, not better," 2015) although it's been more than 10 years, they are looking for additional funding, including a sales tax (actually that's been discussed for going on 20 years, "DC area transit commission board member thinks he has a brilliant idea on how to fund Metrorail: sales taxes," 2022).

My point is you ask for money when you are wildly successful and everyone is looking to join the bandwagon, not when you are failing, in crisis, and you have few friends.

Since they didn't do it in 2009, in 2014, I suggested with the impending 40th anniversary of the system's opening, they should rebuild the consensus.

Since then the system has degraded beyond imagination, with most trains out of service because of a derailment problem and more recently the failure to maintain the certification of hundreds of train drivers. 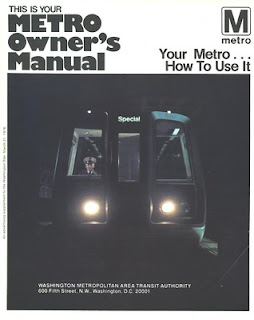 Metro (WMATA) Owner's Manual: Your Metro...How to Use It, cover, Advertising supplement to the Washington Star, 3/21/1976.

I guess WMATA still has this opportunity with upcoming 50th anniversary of the start of service--2026--to get their "stuff" together, rebuild the consensus, actually figure out how to operate the system, grow it, if possible, etc.

-- 50 Years of BART | bart.gov
-- "BART has carried riders for 50 years. It also changed how the Bay Area lives," San Francisco Chronicle (note registration required, although turning off your javascript simplifies access, other links at end of article)
-- "BART 50 year anniversary: The past, present and future of Bay Area Rapid Transit," ABC7 San Francisco

They need to do it probably, but as a region the Bay Area is continuing to grow transit in terms of railroad, heavy rail, and light rail (+ ferry), in coordinating services across transit agencies, having a overnight transit network, funding transit through sales taxes and other means, etc. 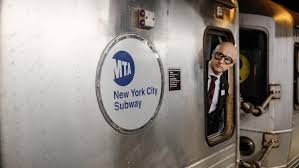 Andy Byford.  I was surprised to see that Andy Byford has stepped down as CEO of Transport for London, as it was his dream job ("Ex-NYC subways chief Andy Byford quits London gig, plans return to US," New York Post).

I do know it must have been bittersweet because to get the national government to re-fund the system given its covid-related financial problems, they had to agree to a lot of anti-rider changes ("'No choice': Khan accepts £3.6bn deal for London's transport," Inside Croydon), even though they've successfully begun opening Crossrail/Elizabeth Line.

Byford went to TfL after being forced out of the NYC Subway system by the since disgraced then Governor Cuomo, who didn't like that Byford got lots of great publicity when he wanted the accolades, and before that the Toronto Transit Commission, which is the third busiest transit system in the US and Canada.

Could Byford be brought in as a "special master" to "unsuck" WMATA?  Is he even capable of pulling off such a feat?

Transit marketing.  Too many resources to list, although this entry lists many, "Advocates to Feds: We Need a New Traffic-Control Manual | My response: Create "the" Manual of Uniform Urban Mobility Control Devices."  Part of marketing is just successfully delivering transit service.

WTOP: Metro says root cause of rail-car problems may never be known.
https://wtop.com/tracking-metro-24-7/2022/09/metro-says-root-cause-of-rail-car-problems-may-never-be-known/