I've been meaning to mention the upcoming NBA All Star Game in Salt Lake, not because I am particularly interested, but because I have seen advance marketing initiatives across the city--banners on the streets, signs on storefront windows, table tents in restaurants, some sort of hoops shooting thing at Trolley Square--which impressed me a bit.

But like all other such events which are overhyped:

this event is overhyped by the Growth Machine, the City Economic Development Office etc.

Utah Business magazine claims that the economic development impact of the Game will be as much as $250 million ("The 2023 NBA All-Star Weekend could boost Utah’s economy by $250M+").  From the article:

Kunkel, director of Temple University’s Sport Industry Research Center, is referring to the economic impact enjoyed by hosts of what’s evolved into a three-day-long basketball bacchanal that briefly transforms the cities it touches, and which happens to be coming to Salt Lake City next month.

Kunkel earned his PhD in sport management and has published a multitude of academic treatises on the complex interactions of brands, professional sports, and fans. But what earns him the most press is the work he oversees estimating the economic impact of marquee sporting events on their host cities. Most recently, Kunkel and his team came to the conclusion that the 2022 NBA All-Star Weekend, held in Cleveland, produced a direct net economic benefit to the city of a stunning $141 million, part of $248.9 million in total economic impact. Based on this assessment, the total economic impact of Utah’s 2023 All-Star Weekend is projected to be at least $250 million, according to Caroline Klein, chief communications officer of the Utah Jazz.

To be fair, the UB article is pretty good, and the economist who did the study claims to have been highly focused on "leakage", that is the spending, like on airlines that ultimately ends up in a bank account somewhere else. 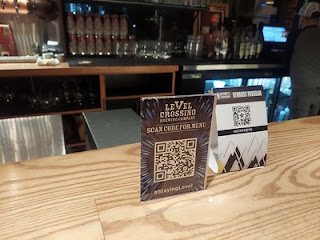 Although in other recent All Star events, the total visitorship claimed is significantly higher than the number of people able to attend the actual game.  Again, it seems questionable that 121,000 people visited Cleveland for an All Star Game when the venue seats just under 20,000.

For another, as I've written, the primary spending categories are lodging, transportation, and food and drink (hospitality).  Most hotels are owned by non-local interest, same with transportation like airlines.

Food and drink places tend to be more locally owned but even so, 18,300 divvied up over 100 establishments isn't as much as you think.  Especially when many might attend special event dinners by sponsors, etc.

One element I hadn't acknowledged in the past is income tax revenue on players ("State tax departments set their sights on pro athletes' earnings," CNBC).  But it's not huge when it comes down to it.

And sports betting, which is now legal in many states, and would experience a local bump maybe in association with an All Star Game, definitely with the Super Bowl.  Although not in Utah, where gambling is not legal. 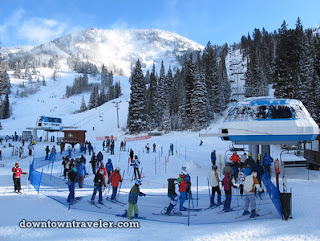 Skiing + the All Star Game.  Generally, when people go to these events, they aren't interested in consuming "local culture" independent of the event--so no local shopping or visiting the theater or museums.

But I could see, I don't know if the companies promoting it tried to link it up, in Greater Salt Lake specifically, people going skiing in Park City, or Big and Little Cottonwood Canyons, and staying longer than three days.  But it would have to be built into the experience.  That would add some money to the till.

Yes, labor in restaurants, hotels, and the airport, taxis/ride hailing, etc., will benefit some, not as much as is hyped.  But the real money likely ends up elsewhere.  For example, Delta is the biggest airline serving Salt Lake.  They're based in Atlanta.

Sports Events Tourism, Costs and Return on Investment. But events tourism is still an important element of community identity building and marketing.  So I am not against it.  It's just we need to be realistic about what it can really do and the return on investment and we should limit how much we are willing to subsidize it, especially as the sponsoring organizations have plenty of money of their own.

For example, with the 2026 World Cup, the City of Toronto is on the hook for at least $90 million.  Because the province, not the city, collects income and sales taxes, the City is likely to net less than $4 million in additional revenues ("The proposal to host World Cup games in Toronto is a sucker’s deal. The city should demand better," Toronto Star).  No way would I say that's an adequate return on investment!

The Salt Lake NBA game doesn't come at great cost to government and related organizations.  According to the UB article, it's $4.5 million--$3 million from the state, $1 million from the city, $500,000 from the county.  But that's because the Utah Jazz team organized a group of 11 other businesses to cover the bulk of the costs and requirements. 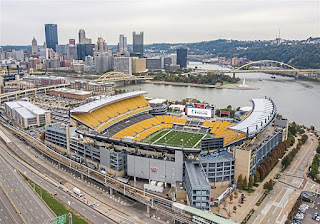 2.  The economics of Pittsburgh Pirates baseball.  I just came across some articles in the Pittsburgh Post-Gazette from last year, that are quite amazing on this topic.

The PPG did a public records request to the Sports & Exhibition Authority, which owns and funds the PNC Bank Stadium.  It took three years of back and forth, threat of lawsuits, and redactions for the paper to get the records.  Which they then analyzed, in two main parts and a follow up 4 months later.

-- "Records show the Pirates’ payroll is often covered by ticket and food sales. Whether they should spend more has tormented fans"
-- "The Pirates’ PNC Park lease was set up to benefit the public, too. It has rarely paid off"
-- "Moneyball: A losing Pirates season can impact city revenues, vendors and even PNC Park itself"

1.  People criticize the team for its low payroll.  The analysis finds that the team doesn't spend much more on payroll than it makes from ticket and concession sales.  Leaving other revenues from television and other sources untouched--although the team points out its minor league and Latin American operations are paid for out of those sources too.

2.  Revenues decline significantly across the board when the team does poorly.  With restaurants and bars netting 30% less or worse.

Think about this when teams deliberately tank.  Interest tanks.  Patronage tanks.  And so does revenue associated with the team.  Even though in most cases, the stadiums and arenas the teams play in are primarily funded by the public.

The PPG series is a great model for other newspapers, especially on this element.

3.  The lease agreement has many elements that favor the team.  Although it's pointed out this happened because at the time in the early 2000s, the team was under the threat of being moved, and they needed inducements.

This isn't a surprise, and is comparable to deals for the Anaheim Angels and Cincinnati Bengals, which are mentioned in the comments on this entry, "Framework of characteristics that support successful community development in association with the development of professional sports facilities."

-- "Revisiting "Framework of characteristics that support successful community development in association with the development of professional sports facilities" and the Tampa Bay Rays baseball team + Phoenix Coyotes hockey" (2022)
-- "Camden Yards baseball stadium is 30 years old" (2022)
-- "Does professional soccer have the same economic impact as minor league baseball in smaller cities?" (2022)
-- "Pittsburgh developer backs down on opposition to ticket fee for concerts, to be used for area improvements" (2023)

4.  City/government revenues from the lease are minimal.  $350,000 maximum annual lease payment.  And revenue sharing agreements when revenues are higher rarely kick in, because the base was set not on average attendance, but on the teams highest attendance years. Most of the amusement tax (fee on tickets) go to the Pirates baseball team, not the city. Etc.

Economic impact study of Pittsburgh professional sports teams.  Interestingly, in 2018, feeling inadequately appreciated, the Penguins (hockey), Pirates (baseball), and Steelers (football) commissioned an economic impact not unlike the one performed for Salt Lake's NBA All Star Game.  It claimed $6 billion per year in total economic impact.

The full study was never released, only a summary ("Just how much do sports teams contribute to Pittsburgh's economy?").  From the article:

Tired of taking it on the chin in debates over whether taxpayers should help pay for improvements to Heinz Field, PNC Park, and PPG Paints Arena, the Steelers, Pirates and Penguins are making their case for the value they bring to the region.

The figures respectively represent direct and indirect spending the teams have produced over the last five years; the amount of city, county and state taxes they generate annually; and the value of the advertising the city receives each year thanks to their presence.

Economics is just one part of their argument. ...

The teams, they argue, are as ingrained in the city’s fabric as Primanti sandwiches and Pittsburghese.

And they help make Pittsburgh big league, with a higher profile than cities like Austin, Texas; Tucson, Ariz.; Omaha, Neb.; and Tulsa, Okla., all of which have larger populations — but no pro sports teams.

“Steel is the foundation. Technology, energy and eds and meds are the future, but the heart and soul of this city has been sports,” said David Morehouse, the Penguins CEO.

Although the Allegheny Institute of Public Policy argues that the numbers aren't credible ("Pittsburgh teams fight back: ineffectively"), making the point that the UPMC Medical System, Carnegie-Mellon University and other organizations have significantly greater impact.