Sports stadiums and arenas and public funding is a tough issue.  Generally, based on the economic research, advocates always argue against.  But the reality is that economic interests and elected officials are generally all in.

So a campaign based on "saying no" is likely to have little impact.

Since the facility is going to get built, with public money, now I argue that we ought to focus on extracting the best possible contract providing the greatest possible community and economic return to the locality, rather than just letting the sports team reap the majority of the benefits.

Over the years, I've been working on creating an item framework, since my first crack at it in 2014.  The most recent version is from 2019 ("Stadiums and arenas redux: Mayor Bowser still wants the area NFL team to relocate to DC").

But today I am revisiting it, sparked by a community planning effort in Salt Lake City. 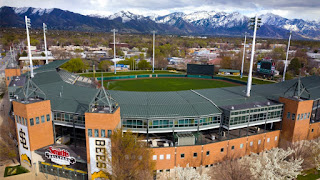 The Salt Lake planning process is centered around the Ballpark neighborhood-where a classically designed stadium with great views is home to the Salt Lake Bees minor league baseball team.
But the neighborhood around the park hasn't improved much in the 27 years that the stadium first opened in 1994, and it has light rail transit access to boot.

I think the key problem with the dearth of revitalization benefits is the lack of a an overall planning and implementation initiative, although there are other issues--the railroad tracks support industrial development, there aren't a lot of build out opportunities on the east side of the tracks, closer to the stadium, the area is distant from Downtown, where a stadium may have made more sense from a leveraging revitalization opportunities standpoint, etc.

Creating a revitalization program for a stadium, arena, or exposition facility that is outside of a downtown or major activity center is tough.  So Salt Lake has a tough row to hoe.

So I decided to take another look at the framework, and I realized that a specific section on neighborhood benefits, if relevant, needed to be separated out as an element.

Note that some of these items are less relevant to smaller communities, and those lacking robust transit networks, and with a sprawl development paradigm.

And practice facilities, which despite all that is touted by teams, seem to have very little economic impact ("Sport team practice facilities and public subsidy (a practice facility for the Washington Wizards)," 2015).  Arguably, baseball training camps are problematic too, in terms of financial subsidies from local governments. 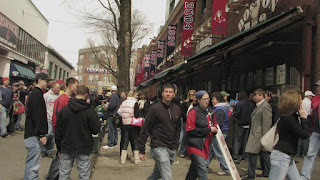 in front of Fenway Park, Boston
Urban Design and Development 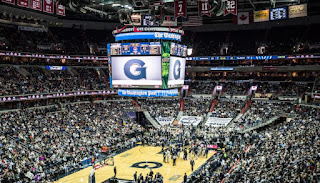 The Georgetown Hoyas play their games at Capital One Arena, which is also home to the Washington Wizards basketball and Washington Capitals hockey teams, maximizing facility utilization.
Programming 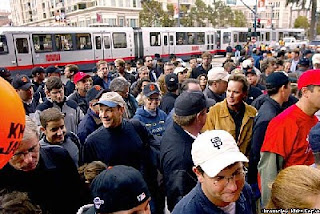 Photo by Mike Kepika of the San Francisco Chronicle. People leaving the streetcars to see a Giants game at PacBell Park.
Transportation

New York City's arenas and to some extent some baseball stadiums, the Capital One Arena in DC, Wrigley Field in Chicago, and PacBell Park in San Francisco are particularly noteworthy examples of sports facilities well connected by transit, where a majority of attendees get to and from the facility on transit.

As mentioned, some sports teams (and other groups) have paid towards transit stations serving their facilities, including the Pittsburgh Steelers, the Pittsburgh Stadium Authority (but not the Pirates baseball team directly), the New England Patriots ("Commuter rail service to Foxboro to start in October," Quincy Patriot-Ledger, and the New York Islanders ("Islanders arena project at Belmont Park now includes new LIRR station," Newsday).

For example, with regard to taxes, as a proto-state, DC keeps the sales, income, and property tax revenue streams associated with real estate development and appreciation and the spending and obligations of residents.  On the other hand, unlike other "states," DC is barred from taxing "day of game" income of professional athletes, a revenue stream enjoyed everywhere else.
Note that New York City's treatment of Madison Square Garden is somewhat unique in that the facility is permitted through a special use permit  that isn't granted in perpetuity but has to be regularly updated, renegotiated and approved every ten years ("Remember, City Council, Forever Is a Really Long Time," New York Times).  Providing stadium/arena use permits for a specific period of time, rather than "forever" gives the locality more leverage. 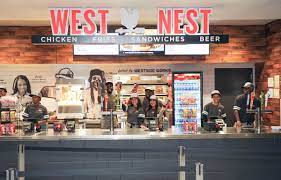 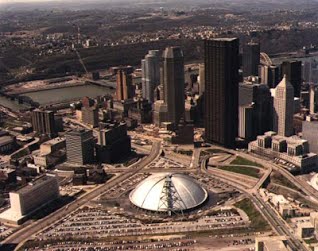 Note that there are plenty of examples of the construction of stadiums and arenas at the loss of viable neighborhoods, such as Pittsburgh's Hill District and the creation of the arena for the Penguins hockey team in the late 1950s.
The arena was demolished a few years ago, and a "restorative revitalization" initiative is underway ("Penguins ‘restorative development’ project aims to repair Pittsburgh’s famed Hill District," The Undefeated, "Not over in the Hill: Neighborhood leaders say the Penguins are coming up short," PublicSource).

In a predecessor piece, I mentioned how more than half the attendees at events at Madison Square Garden or Barclays Center come and go by transit.

By contrast in 2019, for the Seattle Mariners baseball team it was 11%, including ferry (at least they collect the data).

2. Apparently the forthcoming Seattle Kraken NHL team will pay the Seattle Monorail for ticket holders using it, and will provide some level of subsidy for bus and light rail (but not ferry transit). The details on the latter haven't been disclosed, but will include both season and single ticket holders.

The team is paying for improvements to the Monorail system to increase throughput, including paying for integrating the Orca regional transit media card into the fare gates.

According to the article, the Golden State Warriors and Phoenix Suns provide similar benefits.

It's good for 3 hours before the event and afterwards.

4. SF has two primary transit organizations, MUNI which is exclusive to the city, and BART, which is regional, with stations in SF. (Travel between BART stations in the city are included in the monthly premium MUNI pass, but not the basic pass.)

The program with the Golden State Warriors and transit is only for the MUNI.

It covers bus, and light rail/streetcar but not cable cars. AND, it's an all day ticket.

5. In confirming something, I found out that the Pittsburgh Steelers are no longer sponsors of the free fare zone extension to the North Side, but the Stadium Authority and Casino still participate, along with a parking lot company.