Portland Oregon is the poster child for sustainable mobility.

In the late 1960s, it was the first city in the US to decide to tear down an intra-city freeway, in this case along its waterfront, it created a downtown revitalization plan that prioritizes transit not driving and included the creation of a bus (transit) mall (1972), to which they later added light rail (1986).

There is an urban growth boundary which helps (but not exclusively, they still have suburban growth, a lot of it) to focus development on the city as opposed to the suburbs. 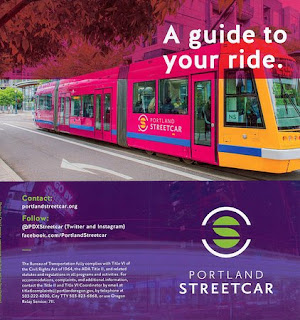 The city was the first in the US to introduce modern streetcars (2001) and since then it has extended this network, added a separate aerial tramway (2006), created the Pearl District out of a deaccessioned railyard, created innovative zoning in a variety of areas including retaining the innovation capacity of industrial properties, has a decent redevelopment authority (now called Prosper Portland)--creating an urban renewal district was a source of funding for the Yellow Line light rail, has strong promotion of biking, built a new bridge across the Willamette River exclusively for sustainable modes (2015), and promotes electric vehicles, including a block called "Electric Avenue."

They also do challenging public art on their transit system, art with some guts.

Until the recession caused them to drop it, Portland was one of the few cities in the US where transit was free in the core--a measure adopted to discourage driving--called the "Fareless Square."  (Pittsburgh and Salt Lake City do this too.  Seattle dropped it during the recession also.  In Canada, Calgary does it also.)

I joke that as a planner, when people come up to you and say "why can't we be like Portland?" it's paralyzing, because they don't understand that where Portland is today is built on 50 years of visionary and incremental decision making, including many bold moves.

-- "A summary of my impressions of Portland, Oregon and planning," 2005
-- Nohad Toulan: The University in the City," Metroscape Magazine, Portland State University

That being said, just because it's taken 50 years for Portland to get where it is today, doesn't mean that other cities need to take that long, because Portland is the ur example.  Plus, Portland has to really work at it because they don't have the intensity of business activity at the core of the city--a lot of that has been lost to the suburbs, especially IT.

But not unlike how Davis, California, formerly the #1 city in the US for bicycling for transportation, has been surpassed by other cities which continue to innovate and at times, much more boldly, perhaps Portland is being supplanted as the nation's premier example of sustainable mobility.

The transportation beat writer for the Portland Oregonian thinks that Seattle has supplanted Portland.  He went up there to study the system and wrote about it:

-- "10 ways Seattle has blown past Portland in transportation moxie"
-- "Carless in Seattle: What I learned from the seat of an e-bike"


For years, Portland sat atop an invisible pedestal, routinely recognized as one of the nation’s top transportation cities.

Bike lanes, TriMet’s light rail network and the resurrection of the urban streetcar set the blueprint, in some ways, for other cities to step up their transit game. 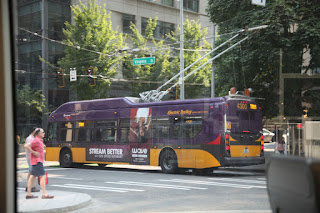 Electric trolley buses are quiet when most buses are not.  Photo: Andrew Theen, Portland Oregonian.

Many have done just that, including Seattle. But now, in many ways, the city to the north is eating Portland’s brunch on transportation ideas, and we’re playing catchup. ...

While Portland is poised to finally act on some big projects, and TriMet plans its biggest bus expansion in its history, the city has undeniably stalled in addressing its transportation issues in recent years. Seattle, meanwhile, has been forging ahead with voter-approved projects costing in the tens of billions and transit ridership is up double digits there.

The Emerald City in recent years has bored long stretches of tunnels for cars or transit, spent more on light rail and buses per capita than any U.S. city and dwarfed Portland’s protected bike lanes infrastructure. And elected officials have demonstrated political leadership in putting transportation at or near the top of the city’s priorities list.

... Seattle offers both a cautionary tale for Portland and a glimpse of what is possible.

This transportation reporter/tourist recently took a trip north earlier this month to get the lay of the transit land. And while I experienced Seattle through emerald-tinted glasses, I saw many examples of our frenemies to the north being bold where Portland has stood still. 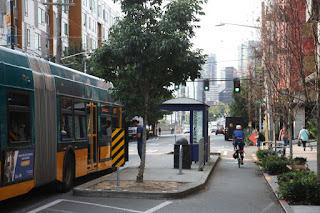 Which he summarizes in a master category as

10. Ambition which includes a willingness to fund expansion, and not just on rail.

Lessons. First, you can't rest on your laurels. Other communities continue to innovate. To remain innovative you have to keep innovating yourself. 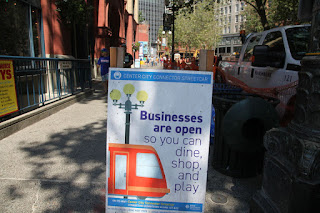 I like how it promotes benefits: dining; shopping; playing.  Too often, planners don't promote the benefits of new programs and initiatives, or what density and intensification can bring in positive ways.

For example, years ago I suggested to a writer at the Washington Business Journal that would be a good thing  for the newspaper to do, back when DC's streetcar was still in the planning stages.

=======
I do think that Seattle is definitely at the leading edge of sustainable mobility practice.  They have a very robust planning system.  They produce reports comparing their system to others and use this information in developing practice.

Something missed in the Oregonian article, Seattle has de-prioritized parking provision in new development, first Downtown, and later (2006) in neighborhoods that were going to be served by light rail.  They also charge more for residential parking permits than DC.

Local referenda have provided more funding for expansion of bus service within Seattle, even as the rest of King County did not vote in favor.

As discussed in the article, they're expanding light rail and recent expansion to Capitol Hill and University Village (not quite yet to the UW campus) resulted in a doubling of daily ridership.

That being said, there have been failures.  Streetcar expansion has had problems and it looks like future service is underfunded and the city hasn't been honest about it.  The former transportation director (ex-DC) seemed to ruffle a lot of feathers.  They pretty much failed with bike share.

As pointed out in the article, they've invested a lot in bus service and amenities and in bike infrastructure. Downtown, they have a pretty good wayfinding system.

The exurban Community Transit bus system uses double deck buses too, again something not captured by the Oregonian writer.

Plus they do this in a difficult political environment.  Yes, Seattle is a leading progressive city.  But it functions within a state that is divided between conservatives and progressives and the Legislature typically leans conservative, making support for transit and other pro-city policies difficult.  Plus there is this rabid anti-taxer, who frequently pushes statewide referenda that often have anti-Seattle effects.

Just came across a 2014 piece from Willamette Week, the alternative newsweekly for Portland, with more back story on how light rail came about: