Yesterday's Washington Post has an article, "'Like the Wild West': Prince George's continues to fight abandoned cars, litter," about illegal dumping in Prince George's County and complaints by citizens and business owners that the County has no enforcement program. From the article:


Standing in front of Kearney’s with his rescue dog on a recent morning, Cummins surveyed the state of Marblewood Avenue.

To his right, there was a pile of wood and a tattered maroon sofa that sagged in front of a “Gorgeous Prince George’s — No Dumping” sign. To his left, a black Dodge Charger with no license plates was parked in front of a “No parking any time” sign. It was one of more than a dozen abandoned cars on the street that had been tagged by county officials with green stickers threatening impoundment. But the cars are rarely towed and the stickers easily pulled off, Cummins said.

“It only gets worse in the afternoon,” he said, shaking his head as he walked his dog inside and explaining that more cars and trash are typically dumped later in the day. …

Complaints through the CountyClick311 program and emails to officials — Cummins estimates he has sent 200 in the past four years — have resulted in little improvement, both Santivasci and Cummins said.

The trash problem isn’t limited to Marblewood Avenue. Under Alsobrooks, the state’s attorney’s office has prosecuted 215 illegal-dumping cases since 2014, Erzen said. According to Maryland law, people convicted of illegal dumping could face up to five years in prison and a fine of $30,000. …

This fall, the county plans to create an interagency task force that will focus on enforcement, tracking and prevention, including studying why people litter and how targeted marketing can reduce the behavior. The county will also deploy solar-powered compacting trash cans and recycling bins in litter hot spots.

It happens that on Monday, the St. Louis Post-Dispatch ran an article, "Caught on camera: Look who the city nailed when it went after illegal dumpers," about the city's focused enforcement program, which puts cameras in areas in which illegal dumping frequently occurs.  There they've been fining offenders, there are repeat offenders, and yes, a majority of the offenders are from the suburbs. 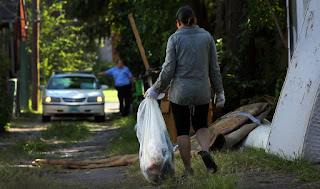 Thanh Huynh of Fenton picks up trash in a Gravois Park alley between Nebraska and Oregon avenues on Wednesday, July 25, 2018, after she and her husband were sentenced to 40 hours of community service and fined $500 for illegal dumping while renovating a Dutchtown property. St. Louis Police patrolman Dave Krapf oversees the community service, making sure that offenders have water and plenty of trash bags. Photo by Robert Cohen.

When I first came across the St. Louis story online on Sunday, I was reminded of what it was like to live in DC in the period before 2005, when the city was marked by crime, abandoned properties, litter, graffiti, and illegal dumping--this was in my old H Street NE neighborhood within one mile of both the US Capitol and Downtown.

It's easy to forget those times, as most of those problems--well litter is still rampant and crime can still be a problem--have subsided.

Photos taken of these illegal dumping incidents led to successful charges against each of the perpetrators.  St. Louis City photo.

Illegal dumping.  At the very least, Prince George's County needs to look to St. Louis for guidance on how to better address illegal dumping.  And illegal dumping is a different problem from litter and needs to be addressed differently. According to the SLPD article the city has a special refuse tax designed to fund specific responses:


The cameras are perched on light poles throughout the city, trained on alleys that cut through stretches of town long forgotten and filled with piles of trash.

In the Baden neighborhood, on the city’s northern border, three of the 100 cameras are mounted in a one-block area just off North Broadway, a dumping ground so popular that a few days after city workers pick up truckloads of garbage, tires, drywall, mattresses and tree limbs, the area looks as if the crews were never there.

The eyes in the sky are part of a full-throttle effort by the city to clean up a mess that has been decades in the making. A trash fee increase approved by the Board of Aldermen last year paid for the cameras and also is funding new trash trucks and overtime for police officers to go after the culprits causing the messes. …

The cameras serve as 24-hour watchdogs, locked on problem areas and snapping images with every movement. The photos are downloaded weekly by police.

The cameras have led to 18 guilty pleas this year, including two by Ray Huffman, a contractor from Bonne Terre, Mo., a town about an hour south of St. Louis.

All but three of those who admitted to wrongdoing live outside the city of St. Louis.

Litter.  Litter is a different story from illegal dumping.  For years I've made recommendations.  Just having more trash cans isn't the issue.  Because the issue is people not caring enough to properly dispose of "trash" in general.  Although yes, not having cans in places where they are needed does increase litter compared to places where trash cans are placed.

The Post story also discusses the county's programs for waste diversion and recycling, which are a different issue entirely.

Community engagement.  In "Every Litter Bit Hurts" (2005), "Litter revisited" (2006), and "Community cleanups (and other activities) as community building and civic engagement activities" (2011) I've discussed various ways to begin to engage residents, students, and others in litter reduction programming.

In my personal experience, it's not enough for "one person" on a block to regularly pick up litter.  Sure, my block and the neighboring streets are cleaner than they would be because I pick up litter, especially recyclables.

But it doesn't result in people seeing my example and then being "inspired" to take independent actions of their own to pick up litter themselves. Maybe they do on their own property (not usually).  They definitely don't do it off their property.

Back when I did "broken windows" type experiments in the H Street neighborhood--focused litter reduction on the 600 block of I Street NE and regular cleaning of the bus shelter at 6th and H Streets NE, I found that the litter picking on I Street seemed to result in less trash being thrown, but cleaning the bus shelter made little difference.

Therefore, I think it's more important to do systematic efforts with community associations and schools, and more "adopt a block" and "adopt a bus stop" type programs.

And rather than focus on one "city-wide" cleanup day, I think it's better to have a full year of programming, drilling down to schools and neighborhoods and political subdivisions (wards/council districts, etc.).

WRT schools, I've always been intrigued by how in Japan, schools don't have custodians.  Instead, the students are responsible for cleaning the school.  Yes, it may not be as clean as floors buffed by a custodian running a floor polishing machine, but the kids learn responsibility and that if someone litters someone else has to pick it up.

It's why the "Every Litter Bit Hurts" piece recommends that all schools do community cleanups within a one or two block radius from the school every fall and spring.

Targeted cleanups in persistent problem areas. It happens this came up in my neighborhood recently, and I made a point that certain areas of the Greater Neighborhood/Ward have extranormal problems with litter.  Usually these are major intersections, industrial areas, areas along high use roads and railroad tracks, and besides commercial districts, often the residential blocks abutting these districts, for one half block to a full block beyond the commercial streets.

Those places should be identified, and a program to address the problems should be undertaken.

Metrics. One of the things I recommend is collecting and positing baseline data about litter. My favorite tool for this is the survey by Keep Australia Beautiful, which is more detailed than ones I've come across in the US.

Other litter reduction strategies. A few years ago, DC was one of the first jurisdictions to pass a 5 cent bag tax, levied on certain transactions and it has made a big difference in terms of discarded plastic bags as part of the litter stream.  While the Wall Street Journal originally covered the story with "the sky is falling" breathlessness, not quite one year later they followed with an article that concluded the program was working.

But it's just one gesture.  A container deposit law would be the best as research on states with container deposit laws have higher participation in recycling programs and less litter too ("What's the best way to get Americans to actually recycle?," Fast Company; "Do bottle bills boost recycling," Waste360). 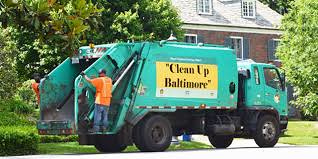 Trash trucks as billboards.  One opportunity to message on litter and illegal dumping is on the sides of trash trucks.  Few municipalities seem to do this.  Baltimore is an exception.