Naomi Klein, author of On Fire: The (Burning) Case for a Green New Deal, with Jane Fonda, tomorrow night in DC


-- 'We have a once-in-century chance': Naomi Klein on how we can fight the climate crisis," Guardian 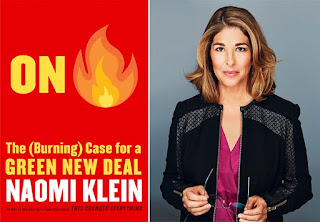 Washington, DC – September 17, 2019 – On Wednesday September 18, The Intercept editor in chief Betsy Reed, senior correspondent Naomi Klein, author of On Fire: The (Burning) Case for a Green New Deal, as well as actress and political activist Jane Fonda will meet to discuss the climate crisis.

The event and book signing, sponsored by Washington D.C. bookstore Politics and Prose, will be held at the Sidwell Friends Meeting House at 3825 Wisconsin Avenue NW Washington D.C. 20016. Attendees are invited to participate in the thought-provoking discussion and discover ways to actively get involved in climate activism on a local and global scale. Naomi Klein will begin the evening by briefly speaking on the book, followed by an interview with Betsy Reed, and subsequent discussion with activist Jane Fonda.

Tickets are priced at $15 and $10 with a student ID. Limited RSVPs are available. For more information on the event or press credentials please reach out to Kimu Elolia at Kimu.elolia@firstlook.media.

About The Intercept: The Intercept is an award-winning nonprofit news organization dedicated to holding the powerful accountable through fearless, adversarial journalism. Its in-depth investigations and unflinching analysis focus on surveillance, war, corruption, the environment, technology, criminal justice, the media and more.

About Naomi Klein: Naomi Klein is a senior correspondent at The Intercept and the inaugural Gloria Steinem endowed chair of media, culture and feminist studies at Rutgers University. She is an award-winning journalist and best-selling author, most recently of "The Battle for Paradise." She has also written "No Is Not Enough," "This Changes Everything," "The Shock Doctrine," and "No Logo."

About Betsy Reed: Previously, she was Executive Editor of The Nation, where she led the magazine’s award-winning investigative coverage. She has edited several best-selling books, including Jeremy Scahill’s “Blackwater” and “Dirty Wars.” Reed co-edited the New York Times best-seller “Going Rouge: Sarah Palin, An American Nightmare” with Richard Kim.