Is the National Health Service/universal health care the reason that the UK doesn't have an opioid crisis comparable to the US?

I have been offline for awhile because of the process of getting my house not only ready for renting, but able to pass a home inspection, as we are renting out the house legally, by registering it with the city, etc.

The city's inspection process has been under fire recently, because a fire at an illegal rooming house killed two people ("D.C. officials strengthen policies for dangerous code violations after deadly fire," Washington Post).

I was worried that was going to make our experience more difficult, but it didn't. The situations were different -- that was a building illegally converted into a rooming house, and besides that, doing it in ways that were unsafe.

Although it was plenty difficult in that we aimed to fix everything on our house that needed fixing, and given the reality of deferred maintenance over 11 years, the list of "what to do" became pretty long.

And there are other things that you have to do as a landlord with a property that you don't have to do as an owner-occupant, such as have storm windows and screens on every window -- and because we have a walkout basement that theoretically could be lived in, that was 6 windows... 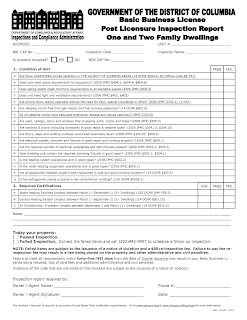 And frankly, there were things that needed to be done when we bought the house and we didn't do them (like we never received a key to the garage and the lock had been painted over besides, but we never replaced the lock, so it never could be secured in the 11 years we lived there--well, I got it fixed, thank you Capitol Garage Door and it is so cool to open the door with a key and then lock it). Now we can put stuff in there (it has a dirt floor, so there are limits) like ladders etc. and it doesn't clutter the house.

Suzanne was worried we wouldn't pass (she gets anxious about stuff like that) and I said, besides the wear and tear on the floors, the house is in better condition today than we when we first walked in 11 years ago.

Now, I couldn't have said that 3 months ago.  It's been a process.  We found a great unlicensed "contractor" who was comparatively cheap, so it cost us considerably less than the normal cost. 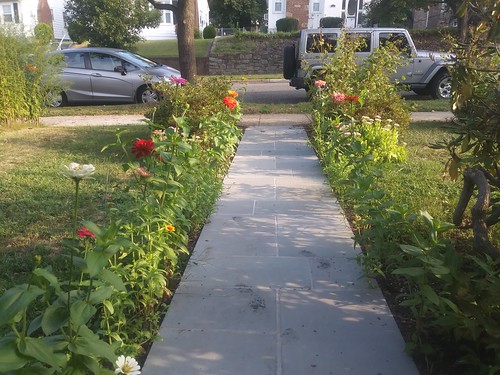 For example, the new walkway.  The former walkway was constructed of individual bluestone "pavers," very large, which over the decades had settled slightly before grade.  We put this in its place, and afterwards, I planted zinnias along it.

But that was a two-day project for the contractor, and I spent a couple hours digging out the stones, and transporting them to the garage.  Fortunately for us, we are one house off the alley, so I could get them to the garage that way (our house has two grade levels--the ground floor is at street grade, but the back of the house is like 6 feet or more lower, and we have a walkout basement).

In fact, I commented to my brother that the array of specialists we pulled together to do all this things (like rebuilding historic windows, replacing broken glass panes, yard work and hauling, garage door locks, finding replacement fencing, etc. -- we already have a great plumber and electrician--the plumber is fabulous but not cheap, but his work is always excellent, and the electrician firm is good and inexpensive--e.g., something we needed to do, Kolb Electric estimated it would cost $2,200, and the firm we chose offered a similar option for one-third the price, but an even cheap option that all told cost $250, plus our painting of the electric line housing), that we could put together a team that could successfully flip houses.

... so part of the cleaning process has been going through (or at least reboxing) tons of printed matter that I either read and clipped, or somehow didn't read at the time. I was skimming a Financial Times from 2017, and there was an op-ed on the likelihood of the UK developing an opioid crisis comparable to that of the US ("The Opioid Files: Follow The Post's investigation of the opioid crisis," Washington Post, and it occurred to me that wasn't likely because of the way the health care system is organized there.

The profit motive around being "a prescription drug mill" is different in the UK than in the US ("As overdoses soared, nearly 35 billion opioids — half of distributed pills — handled by 15 percent of pharmacies," Post), and doctors are less independent and subject to more oversight.

Capitalism without adequate regulation doesn't work because there are always actors willing to take advantage of gaps in regulation or opportunities for extranormal benefit.