From time to time I make the point that "planning and zoning is supposed to improve quality of life," and when routine outcomes from those processes don't do that, it's an indicator that the processes aren't designed properly.

What I say is that the point of planning is supposed to "design conflict out" rather than "design conflict in."  That's one of the justifications for separated uses, which are now excoriated by us pro-urbanists, but have their roots in how residential and industrial areas used to be cheek by jowl in cities, and because of limited environmental regulations at the time, the negative impacts on residential uses were tremendous.  E.g., bad air quality, dust, noise, etc. 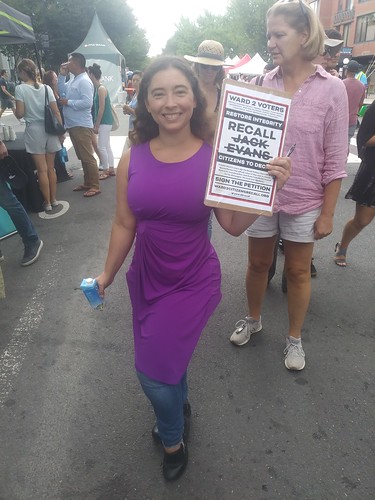 I went to the 17th Street Festival yesterday -- I like festivals because nonprofits and other civic use functions often have tables -- and one person was carrying a clipboard with a poster about how Ward 2 Councilmember Jack Evans should be recalled, because of various ethical transgressions.

Later I went out to dinner with some people I ran into at the Festival, and we were talking about Jack Evans among other things, how wrt the city transgressions (not the WMATA transgressions), they would have been illegal had he sent the email from his personal account.  One of the people had come across an article damning the Washington Post over its long time support of Evans ("WaPo Complicit in Corruption of DC Council's Corporate 'Concierge'," Counterpunch).

Years ago, blogreader EE shared with us a book published by the World Bank, Corrupt Cities: A Practical Guide to Cure and Prevention and I wrote about it in this 2011 piece, "DC ethics legislation misses the point: focus on what produces corruption as a regular outcome, not monitoring."

In response to the heated discussion about Evans, I said "well in the past plenty of Councilmembers like Jim Graham and David Catania had similar conflicts, as does current sitting Councilmember Anita Bonds." That doesn't even get into people who had to resign because of other transgressions (Kwame Brown) or went to jail (Harry Thomas Jr., Michael Brown).

Potential for ethical failure is built into the position.

This comes about because Councilmembers are allowed to have second jobs. They are supposed to avoid conflicts of interests, but like with "pay to play" in electioneering fundraising, when you allow second jobs, or consulting, it creates opportunity for ethical transgression, because the most motivated of potential employers likely want to leverage the ability of the politician to affect events under the purview.

The one thing I hope comes out of this is a permanent ban on second job income, with the exception of teaching and independent writing. 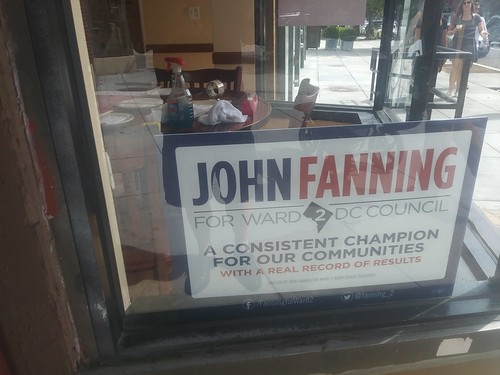 We also talked about the various people running for the Ward 2 position, and how the new law providing public financing of for local elections, by providing a 5x match of locally raised funds, could have the consequence of having the opposite effect that was intended.

The idea was to promote a more grassroots approach, with less reliance on donations from corporate sources or out of state interests; but because such large amounts of money are involved now ("Challengers to Jack Evans flex new financial muscle under new D.C. public finance law," Washington Post), it may have the unintended impact of lessening the need to be grassroots, because a relatively small number of donations can trigger such a big return.

The people at dinner are involved in various Dupont Circle/Ward 2 civic matters and we discussed cycletracks among other things.  One that come up is a proposal for one on 17th Street ("17th Street in Dupont could get a protected bikeway," Greater Greater Washington), which even though I am a hardcore cyclist, I disagree that it is needed for one, but also because I have a better way to leverage 17th Street for sustainable mobility purpose.
Basically the idea that we need to remake more streets, at the very least, one in every ward, as sustainable mobility corridors, along the lines of what I suggested for Silver Spring's Fenton Avenue, although with different recommendations for 17th Street (more about that later):

Anyway, they didn't know about the recent study which called attention to engineering design flaws in the 15th Street Cycletrack ("IIHS Study: Some Protected Bike Lanes Leave Cyclists Vulnerable to Injury," press release). The conflicts are that there are a lot of curb cuts/driveways/alleys along the route, and each presents the opportunity for conflict. 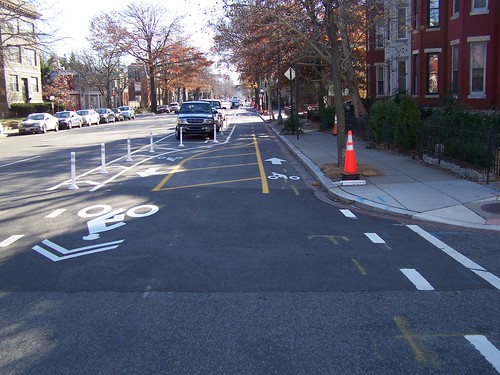 By contrast, most cycletracks are designed to have minimal opportunity for the incursions of curb cuts, driveways, and alleys. Hopefully, the same mistakes won't be made in other settings.

But it's not really correctable because even if the section of the cycletrack from Rhode Island Avenue to U Street functions less well, it's part of a well used cycletrack which in turn is a key element of the growing bikeway network across the city.

It is however, addressable.  I'd probably add sensors and a flashing light set up to the areas that are determined to be key problems, just like pedestrian HAWK signals.