The discussion of the proposal to create a Silver Spring "Sustainable Mobility District" is very long.
So it's broken up into four sections, plus three related posts:

From BHAGs to BHPAPs: Big Hairy Projects Action Plans.  The concept of BHAGs, or "Big Hairy Audacious Goals," comes from the writings of Jim Collins, author of a number of books analyzing businesses that are "built to last."  According to Collins:


All companies have goals. But there is a difference between merely having a goal and becoming committed to a huge, daunting challenge–-like a big mountain to climb.

Toronto as a world city.  Last fall, reading about Toronto planner Joe Berridge, in two articles by Toronto Star columnist Royson James ("Toronto needs to take one last step to reach civic greatness," "Toronto needs a new wave of world-scale projects"), I was struck by how many of the big projects outlined by Mr. Berridge came to be.  From the first article:


... what Toronto needs is a greater push toward the next transformational wave of civic improvements. Double down. Find the money that’s obviously there. Invest and grow or slip back to the tier of cities occupied by Houston, San Francisco, Manchester.


Berridge’s 1999 seminal report, “Reinvesting in Toronto: What the Competition is Doing” gave wings to the movement that prodded governments and civic philanthropists to invest in fixing up Toronto’s derelict waterfront, remake and rebrand its cultural attractions, and think big. ...

Berridge says it is the city’s “moral obligation” to use its taxing power, its wealth, its status as Canada’s only global city and the historical advantages of public education, public health and public services to propel Toronto into super city status.


Coming out of the SARS crisis, Toronto was in woeful shape. Civic advocacy — much of it centred on a platform erected in the pages of the Star and its campaign for a New Deal for Cities — resulted in a cultural renaissance.

Six new major cultural buildings popped on the architectural horizon and created a buzz that reverberated beyond our shores. Luminato arrived, as did the MaRS project. Waterfront revitalization started. The ROM, Art Gallery of Ontario, opera house and OCAD University are a testament to that time.

According to Royson James, Toronto's trajectory was significantly reset as a result of the city and stakeholders coming together to build a set of new and expanded institutions that were transformative.

His pieces are aimed at getting Toronto's elected officials to think more broadly but also get much more focused and realistic (about funding) to achieve new transit investments, big park proposals, and other projects.

Big plans in Liverpool, Bilbao, and Marseille.  The concept of Projects Action Plans extends my analysis of the success of revitalization initiatives in Liverpool (before the UK's ill-considered austerity program and the cut of the Liverpool local budget by 50%) and Bilbao and the set of new cultural institutions and facilities created by Marseille for its Capital of Culture program in a series of pieces on European culture-based revitalization initiatives.

Those places had the equivalent of a PAP, while the typical Comprehensive/Master Land Use Plan does not include a recommended set of projects aimed to be transformational.

-- the Silver Spring revitalization program
-- Bethesda Row and the development of a new shopping district there
-- Rockville Town Center redevelopment including a new public library and the Center for Visual Arts
-- the development of the Strathmore Music Hall, which is a fabulous facility
-- the development of the RideOn suburban bus transit system to complement the Metrorail system originally, but is now a full fledged system not limited to moving people to and from Metrorail stations
-- the reformulation of the suburban land use and transportation planning paradigm in terms of 21st Century conditions ("Tall Talker: Rollin Stanley, Montgomery County’s new planning director, has a big personality and big ideas. Both are rubbing some people the wrong way," Bethesda Magazine; "Rollin Stanley takes planning job in Canada," Washington Business Journal)
-- creation of the Agricultural Reserve (1987) which functions as an urban growth boundary

BHPAPs elsewhere.  Other examples of communities taking on a coordinated set of projects in what we can call a BHPAP as a plan include Oklahoma City, Hennepin County-Minneapolis, Portland, and Medellin, Colombia.  (Those examples are laid out in a separate entry, "(Big Hairy) Project Action Plans as an element of Comprehensive/Master Plans.")

A Projects Action Plan as a way to coordinate existing investments.  In the tensions between "West County" -- which has the White Flint redevelopment initiative led by the private sector which aims to "urbanize" that section of Rockville Pike, and East County, which lags economically and in terms of the number of large businesses and federal agencies and facilities located there, people often assert that the County underinvests in East County.

It has, to the tune of many hundreds of millions of dollars.

But as discussed in the above entry, outlining the Silver Spring Sustainable Mobility District program, more knitting and some different kinds of "softer" investments are required to achieve fully the intent of the various initiatives and projects, which work great individually but don't necessarily have the multiplicative impact when multiple projects work in conjunction with each other.

The expanded program would overlay and integrate the various management and planning districts (Arts, Downtown, Parking, Urban) that the county has developed for Silver Spring.

Surprisingly, two-way cycletracks cost less than $1 million/mile according to a cost chart from Portsmouth, New Hampshire (2014).  The combined cost of the various cycletrack and street furniture and related improvements is likely pretty small, less than $10 to $15 million.

Forms of implementation and management.  Three of Montgomery County's biggest "cities"--Bethesda, Silver Spring, and Wheaton--are "unincorporated" conurbations, so rather than having a separate City Government, the County Government is the primary actor.

To provide extra-normal attention and services beyond that normally provided in "Downtown" and other commercial districts, communities often create a form of what I call a "commercial district revitalization organization." People are most familiar with "business improvement districts," which typically function in heavily commercial areas, and don't include residential properties as members.

-- "The Sub-Districting of Cities: Applying the Polycentric Model," Urban Affairs Review, May 2001

The difference between BIDs and "Main Street" type organizations is that the former primarily represents the interests of property owners and is funded by an add on to the property tax, while Main Street groups tend to not receive regularized funding streams from tax assessments. Additionally, Main Street organizations generally involve residents and business proprietors more directly in their operation.

San Diego has a variant, which I prefer, funding all commercial district management initiatives with a property tax add on--some are managed as BIDs, others as Main Street programs.  San Francisco has a couple of variants that can include residential properties in the assessment district from the outset, Neighborhood Benefits Districts and Green Benefits Districts, he latter focused on plantings and maintaining open space.

In the place of city or town government structures, for the unincorporated conurbations, Montgomery County has geographically designated Regional Service Centers and where needed, separate Urban Districts.  Bethesda is atypical in that it has a BID, the Bethesda Urban Partnership, but there isn't a BID in Silver Spring.

In Silver Spring, some of the functions of a BID are carried out by the "Downtown Silver Spring" entity, and some by the County Government, while some areas get "less service" and other needs (like retail planning or programming the open space network) are either not provided or under-provided.  Separate citizen advisory boards provide input and oversight for the Urban District and the Regional District.

To realize the "Silver Spring Sustainable Mobility District" program as outlined above, the Silver Spring Urban District needs some reformulation.

In "Parking districts vs. transportation/urban management districts: Part one, Bethesda," I recommended that instead of terming the "Parking District" a parking district, it should be repositioned as an urban district including broader transportation functions, not just parking.  That's what the district is doing anyway, but the language of the assessment district ties everything to whether or not a building provides on-site parking, even though the property and the tenants benefit from other services.

Amalgamating the various service districts into a unified Silver Spring Community Services Tax District. In Silver Spring, the idea would be to combine business, transportation, greening-parks, and programming functions into a broad Community Services District,, funding through a re-terming of the Parking District into a Community Services or Benefits District.    (By comparison the budget for the Bethesda Urban Partnership is close to $5 million, but that includes funding for their bus circulator.)

A schedule for how to assess buildings by type and by distance from the core would have to be created.  Technically, it would probably not include the current pedestrian mall on Ellsworth Avenue because to change the relationship there would require changes to existing contractual agreements.

And figuring out how to deal with owner-occupied housing, especially single family properties, is likely to be controversial--it has been a constant source of animus among a certain segment of residents from the beginning of Baltimore's Charles Village Community Benefits District, which was created in the mid-1990s in part for public safety reasons ("Taxing district is sought Charles Village wants protection - Collections," Baltimore Sun).

Although the more recent creation of the Dogpatch and Northwest Potrero Green Benefits District in San Francisco demonstrates that this doesn't have to be the case ("In S.F.'s Dogpatch, innovative plan to pay for park upkeep," San Francisco Chronicle").

Note the walk signal-based public art on this segment of the Indianapolis Cultural Trail. 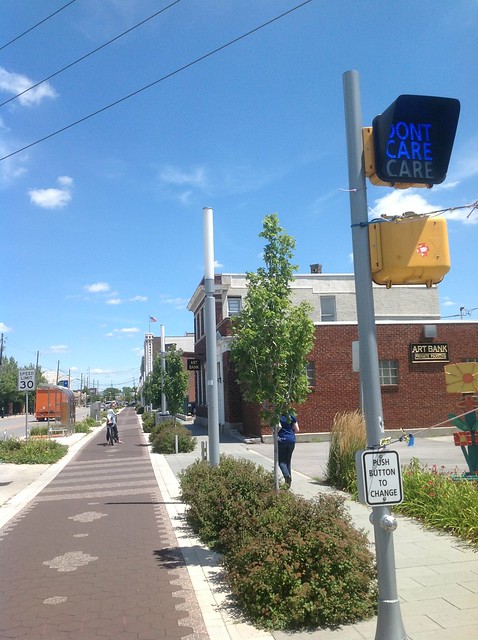