On Wednesday, Sept 11th the District’s Department of Energy & Environment (DOEE) will be hosting a listening session on urban agriculture. DOEE welcomes interested individuals and organizations to share their priorities for a new Office of Urban Agriculture. The event will include a short walking tour of THEARC farm - appropriate footwear is encouraged for those who would like to participate. Please RSVP at the link below.  For those unable to attend in person there is an online survey where you can share your thoughts; the survey link is included below.

while it's great you sent out this notice, personally I believe it is incredibly disrespectful to citizens to provide notice to a public meeting only one or two days before. With such short notice, people often can't attend. (Although note that my life has been so busy lately, I haven't logged into this email account for more than 10 days, and you may have sent out other notices.)

wrt "the issue" there are many elements, including:

1. a pathetic urban agriculture extension program at UDC, compared to other cities

3. "County" fairs as opportunities to promote agriculture and the environment, e.g., I go to the Arlington and Montgomery County Ag Fairs frequently, in large part for the community organizations tables, the master gardeners, etc.

4. the city could do a lot more in planting fruit trees in tree planting strips and remnant "triangles". E.g. with my neighbors I do pick serviceberries from the bushes in the planting strips, planted near my house in Ward 4, and I make great pies. 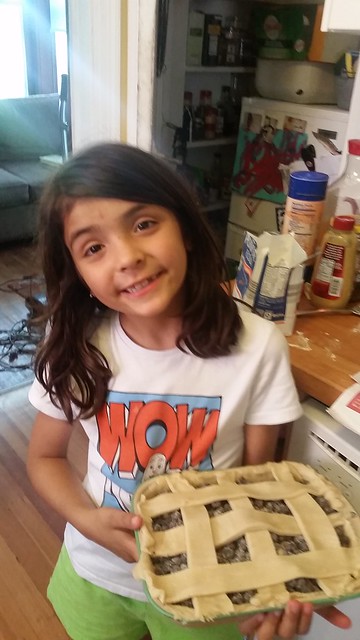 Marina with one of our pies, made from berries we pick off bushes planted by the city in the "planting strip" on streets in Ward 4, including 3rd Street NW near the Takoma Recreation Center.

(Note that recipe for "Saskatoon Berry Pie," where you simmer the berries first, to release some of the juice and make them softer, is better than pie recipes for serviceberries that don't call for first simmering the berries.)

A neighbor has unofficially been planting tomatoes and doing other nice things in a reservation (the odd shaped triangles of land formed when the avenues cross the traditional street grid) down the street.  But such reservations could be used for what are called "food forests."

5. Cheaper sources for compost. (E.g., if we travel in "rural areas" and we need compost, I try to stop and buy some at a "farm store" like Agway. In effect, the savings compared to buying locally pays for the cost of a rental car.

The concept of BSA can be built upon and extended.

7. The WMPT PBS television program "Maryland Farm and Harvest" is an awesome show. Perhaps working with the Office of Cable Television, a similar kind of program could be created "for DC." I learn a lot from it.

WETA (and WJLA) also broadcast a different farm related show, "America's Heartland." But when WETA shows it, it's at 6am on Saturdays and they don't repeat it.

WMPT also broadcasts the PBS Create Channel, which includes a number of "gardening" related programs such as Growing a Greener World and P. Allen Smith. These are great resources.

8. There is an agriculture academic/career program at an urban high school in Philadelphia.

9. Also in Philadelphia, a cool nonprofit community urban nursery, GreensGrow Farm, that is located in the core of the city, in the Fishtown neighborhood

Why not use some of the parking lot at the RFK campus for such a use?

10.  Use of interstitial land at public housing complexes.

11.  When Sheila Dixon was mayor of Baltimore, she supported urban gardening, and herbs like rosemary were among the plants growing around city hall.  I don't seem to have a photo.  But there are plenty of opportunities to demonstrate support for urban agriculture on city controlled land.

-----
Note that I argue one of the foundations of the community development field is derived from the community economic developments initiatives out of the Agriculture Extension program, which is one of the US's greatest achievements (the creation of Land Grant Colleges--federally supported agriculture colleges also providing support to farmers on a county-by-county basis).

Keep sharing such a valuable information. Thanks..

I found so many interesting stuff in your blog especially its discussion. From the tons of comments on your articles, I guess I am not the only one having all the enjoyment here! keep up the good work.
Beauveria bassiana