The lesson is to be very careful about your external communications and outreach.

1.  Boston.  MBTA sends out a social media/twitter message asking for videos about favorite stations as a Valentine's Day promotion, with the winner getting a free trip.  Mostly people posted about problems with the stations, infrastructure and service ("...The T asked people to share some transit love on Valentine's Day. The responses were heartbreaking," Boston Globe). 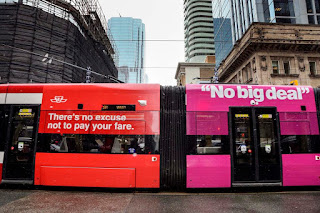 2.  Toronto Transit Commission has a big marketing campaign with wraps on streetcars and buses and ads in transit stations and bus shelters on fare evasion.

Toronto Star columnist Shawn Micaleff suggests it smacks of an incredible negative attitude about riders, given that fare evasion is about 5% ("Fare evasion may be a problem, but the ‘culture shift’ we need is a respect for transit riders").

The Toronto Sun reports ("Riders make spoof posters shaming TTC fare evasion campaign") on a guerrilla advertising campaign pushing back against the agency concerning service failures.  Although the ads aren't being placed in the public space as posters so far.  Instead they are being posted to thread on Reddit. 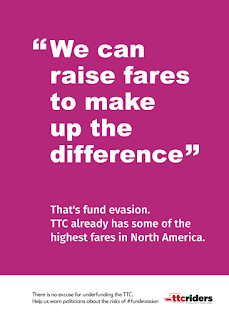 One of the spoof ads is pretty biting concerning the cost of fares (although comparatively speaking, TTC fares are cheaper than many other systems).

3.  Not exactly the same, but the transit agency for Ottawa, Ontario has an appointed citizen representative.

This year it's Sarah Wright-Gilbert.  She sees her role--she is a daily transit rider--as calling attention to service issues in a very public way.  According to the Ottawa Citizen ("'My only motivation is to improve public transit': Open, forceful citizen transit commissioner raises stink at city hall") that doesn't sit well with the transit agency management or other board members.

I can see why both groups of stakeholders would be upset with her.  There is a way you have to operate within government and/or the organizational world.  But there is a difference between acquiescing and continuing to outline issues in a forceful way.

It's hard to work within the system when the system is resistant.  OTOH, I can understand why she does it the way she does, given my experience in trying to be "constructive on the inside".

(2) It takes years for your points to be acknowledged and then when they are incorporated into programs, you've long since been forgotten as the originator.  (Or you get screwed in other ways.)

(4) No room for critical analysis whatsoever.  A big part of the reason for this is that there is a fine line between what "powers that be" see as (personal) criticism and what I think is "critical analysis."  I've long since learned to not write critical analysis in personal terms (e.g., "X is stupid for doing Y" rather writing, "Y doesn't make sense for these  15 reasons..."  As it is listing reasons beyond 2 or 3 is too many...)

Any counter point is seen as criticism, and taken personally, not as analysis with the aim of improvement ("Helping Government Learn," 2009 and this 2007 post which references another Harvard Business Review article, "Your Company's Secret Agents," about "positive deviance").

Every so often I am wracked with self-doubt, figuring that I am a terrible, hopeless communicator, since the points I've been making don't seem to resonate.

Or I worry that I am getting stale in my thinking and ideas (even though my stale is usually better than most other people's very good).

=======
Some very early blog entries on the issue of transit marketing and strategic communications include:

Some BART strategic communications responses.  A few years ago, BART got props for a twitter response feed that made the point that underfunding transit was the cause of system breakdowns ("BART gets candid in Twitter exchange with angry riders," San Francisco Chronicle).

The BART system also has elected representatives, and according to a profile in the Chronicle, Lateefah Simon who represents part of San Francisco, probably has a similar outlook to Sarah Wright-Gilbert ("Lateefah Simon leads BART board on track to social justice").

I do think it's actually a good idea.  As should be information listing contacts for "Rider Advisory Councils" or similar programs.

When I used to commute to Baltimore, in Penn Station there was a bulletin board with information posted by the local chapter of the Rail Passengers Association.  And sometimes in smaller MARC stations I seem to recall, like in Kensington, Maryland?  But definitely not at DC-area Metrorail stations or Baltimore area MTA stations. 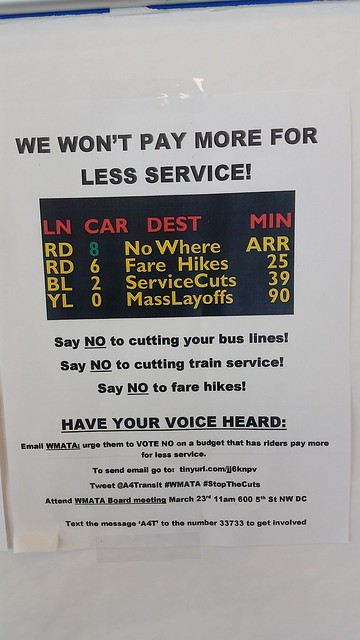 ... and shockingly, once I saw something similar at the Silver Spring Transit Center, probably posted by a transit employee?

1. There was a recent article in one SF paper about Bart losing a ton of wknd and off peak hours. The usual culprits (homelessness, lawlessness etc - big issues in SF area) were bandied about, but also the abysmal service (every 20 mins on Sundays) was mentioned. They FAILED to mention they RECENTLY just dropped it to every 24 mins on Sundays for the upcoming budget. An absolute disaster!

I also recently got into a Twitter argument with one of the elected Bart board members about driverless trains. I mentioned the need for driverless train so they can run more frequent service she responded saying they have that I said what about a conductor in the cab and she said oh they need that I said what the hell are they going to do in an emergency? They are unwilling to make any tough choices there

2. Great poster but the union has been relentless of course they only care about themselves not about actually providing Transit service. Again would need actual driverless trains to really provide high-quality frequent metro service in DC! And not busy WMATA balls so much re raises healthcare pensions etc. what's the average total compensation of her employer there now it's got to be at least a hundred 35k?

Suzanne was working a side job in Navy Yard on the weekends, and the Green Line there was every 24 minutes.

Yes, without a train at least every 10 minutes weekend service can be really really bad.

I am even ok with a weekend and evening surcharge to run more frequent service, just to get more trains, if that's the issue.

A huge falloff in Metrorail ridership was evening and weekends. (Of course, ride hailing and one way car share have contributed.)

OTOH, Melbourne has a great weekend pass option. I've touted it for many years and I think that might have influenced WMATA's creation of a slightly better priced weekend product.

It seems simpler now, it's just $6.40 for unlimited travel, at least in the core. (They also have daily capping, like London.)

Do driverless trains mean "more service" or "just" lower costs. (Nothing against lower costs, as you point out the total cost per employee gets high pretty quickly).