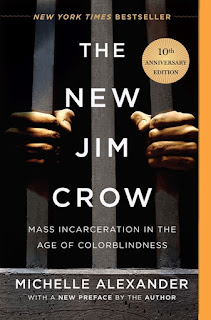 I am reading The New Jim Crow and while I am not sure how I feel about the book, the author Michelle Alexander makes a compelling argument about mass incarceration being the current stage of racialized social control (after slavery and the Old Jim Crow).

There is an article in the Baltimore Business Journal, "Real estate leaders say Baltimore's poor public image is 'exhausting'," where the real estate industry is complaining about the impact of the post-Freddie Gray riots on the city's image, business climate, and current economic success. From the article:


Baltimore real estate executives are weary from fighting a tidal wave of negativity and shaky city leadership that have hampered leasing, retail and tourism efforts around town. ...

"The business community needs to step up and challenge the city leadership and create an environment where people want to live and work in our city," Deering said. "We can’t just complain, we’ve got to get them involved, and we have to hold them accountable."

Deering said no elected city officials attended the forum. Also absent were representatives from the Baltimore Development Corp., the city's quasi-public economic development agency, and the Downtown Partnership of Baltimore, a nonprofit that oversees the central business district, in part through funds collected from businesses.

Tom Fidler, executive vice president at MacKenzie, said the discussion ranged from Baltimore's positives to its negatives, which included a poor national and regional image problem.

"The word of the night was exhausting," Fidler said on Friday. "We're all exhausted with the constant battle of changing the perception of our city on the national and regional level. It hurts, and none of us can sugarcoat it."

For the past few years, I've been thinking about these issues in terms of municipal asset and risk management ("Town-city management: 'We are all asset managers now'") and as key responsibilities of a city's political and economic leaders--elected, appointed, and stakeholders.

I have written about this also in terms of policing and year after year settlements totaling tens if not hundreds of millions of dollars in cities like Chicago being an indicator of systemic problems ("Managing the brand promise of cities in the face of corruption").  Instead of taking the cost as a given, address the process that generates unpreferred outcomes.

But I haven't always been thinking about this in terms of "racialized social control" or at least not in such stark terms.

-- "An outline for integrated equity planning: concepts and programs"

I do think it's reasonable to draw such conclusions about the policing, court, and prison system.

After all, my basic lesson from serving on grand jury duty was that the city spends billions of dollars each year on criminal justice, emergency services, human services and other social programs just to keep the city's low income households "the same."

=====
Creating a transit network as a fulcrum for Baltimore revitalization.  One thing that would make a huge difference is the creation of a city-focused transit network, because two relatively poorly placed transit lines that don't really connect--one a light rail, the other a truncated subway--aren't enough to spark substantive in-migration to neighborhoods across the city.

This piece, based on a paper I wrote for the Baltimore County master plan update process in 2009/2010, outlines a program equally focused on both jurisdictions, although the paper is a bit more focused on the County since that's where I was working.

-- "From the files: transit planning in Baltimore County"

Looking back at the original program for planning a transit network in Baltimore City, dating to the 1960s, would provide a template for a more complete system.

Also see "A "Transformational Projects Action Plan" for a statewide passenger railroad program in Maryland") and "Revisiting the Purple Line (series) and a more complete program of complementary improvements to the transit network" where I suggested that Baltimore City should leverage the PL project to get more modern light rail vehicles.

I'm browsing thru the links now - will comment more later.

I did just buy my first Baltimore rowhouse last month - about 4 blocks from John Hopkins Hospital - for a great price. High ceilings etc. Buying another 1/2 in the next month or so. I just don't know that much about it. The negative image does seem to be a huge problem. Residents seem to love the city tho! I don't know much, will comment more later

I love Baltimore. Had I stayed on in Baltimore County planning I would have gotten a Baltimore house too.

4. Merging the city and county. (Not absolutely necessary but would reframe and reposition in necessary ways.)

Granted it doesn't have the same federal employment engine that DC has, but if it had a transit network like DC, it would begin stabilizing more neighborhoods and reattracting residents.

Once you have the positive inflow of residents, that begins the cycle of re-attracting larger businesses.

You mentioned that residents like being there a lot.

Baltimore has a strong array of civil society organizations and foundations committed to investing in the city. (Maybe Abell and Weinberg don't function quite as well as the Heinz Foundation does in Pittsburgh, but they are definitely more effective than comparable foundations in DC.)

That's a big plus in the continued failure of leadership to transform and transcend.

In the Larry Littlefield piece I cited he gives three examples of inward investment initiatives that take many extra years to come to fruition because of resident opposition or regulatory burden.

One of his examples is Dan Gilbert (Quicken Loans) in Detroit.

My quibble is that in my way of thinking, granted in this case it's over a 20 year period, Gilbert is an entrant sparking fourth stage/phase of modern revitalization in Detroit.

2nd --although Illitch took over 'cause he had money, bought the Tigers and Red Wings, his wife "got" the Casino license, invested around the sports facilities, etc.

3rd - Karmanos, who moved Compuware to the city.

4th - Gilbert, who around the crash moved the loan company to Detroit, and then independently invested in real estate, helping to spur faster revitalization.

It occurs to me that Gilbert is like Scott Plank. Unfortunately Plank took his eye off the ball for Under Armour. But his real estate investments are moving forward. As are the separate investments of his brother Kevin (like in redoing Cross Street Market in Fells Point).

I am a bit out of touch and not as familiar with the ins and outs of Baltimore, so I don't know what stage Baltimore is in vis a vis my Detroit example.

But man if they would do some transit expansion.

I will go back to the entry and add a link to my ten year old paper on that...

That Larry Littlefield piece was incredible! One of the best reads I've had in years

Better Leadership.... that's funny. Everyso often someone that isn't too corrupt, is just competent enough, and can inspire others around them (city govt employees, local pols & residents) to try to be their best selves, comes around. But those types are not in great supply. You deal with the people you have, not the people you want.

Baltimore City has more of a real transit network than say, PG County. It has 3 MARC stations, various bus lines, some free, the light rail, which is sort of free-ish because I have yet to figure out how to use my CharmCard on it, and the subway... yeah that is a line to nowhere.

It's not as if money hasn't been invested in poorer neighborhoods. One can argue not enough has been poured in, or we can go back to the corruption problem in leadership. Switching topics a little bit, I was looking at the per pupil costs of Anacostia HS vs Wilson. And for as much that was spent on Anacostia students, outcomes should be better than they are. I suspect money is getting funneled to someone's handbag collection. I'm sure the money spent on Healthy Holly (taking the topic back to B'more) was counted as health program spending. If you just measure spending and not outcomes, it leaves a lot of room for graft and welcomes grifters.

Merging Baltimore City and County together has just as much chance as getting a long divorced couple back together. It could happen, but Baltimore City would have to have completely turnaround.

Baltimore is the alternative universe version of DC. A sister city that has fallen in with the wrong crowd, got into drugs, and has moments of recovery and relapse.

When I read the title of your blog I became very much surprised but after reading whole blog, I understand this properly. Really very interesting content.
http://irvingtaxi247.com